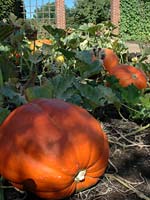 Q. How do I know when my pumpkins are ready to harvest?

If pumpkins were planted at the proper time of the year, they will be ready to harvest in October. The most obvious way to determine if a pumpkin is ripe is when it loses its green color and turns a solid-orange color (with the exception of non-orange pumpkins). This may be as early as late August to early September, depending on the variety grown. Harvest non-orange pumpkins whenthey are a consistent color and the rind is hard. The perfect time to do this is when the vines cease growing and turn limp, usually after a light frost. If vines remain green and healthy, you will need to harvest pumpkins before heavy frosts. A sharp knife should be used to cut the pumpkin from the vine, leaving approximately 4 inches of stem on the fruit. Using a sharp knife or pruners to remove fruit will prevent stems from splitting; leaving part of the stem attached will keep the pumpkin fresh longer. After harvesting, avoid carrying the pumpkin by the stem. Allow the stem to dry on the pumpkin.

Occasionally, pumpkins are not ready to harvest, either because of adverse weather conditions or because they were planted too late in the season. Before a heavy frost, youwill need to remove the pumpkins from the vines. Dry the pumpkins thoroughly and place them in a warm area with daytime temperatures near 80º F with cooler night temperatures. Make sure there is space between the pumpkins to allow good air circulation. This curing process will allow the fruits to ripen and the skins to harden. If the pumpkins are not close to being ripe, you can place apples around them to have them ready for fall, Halloween, and Thanksgiving festivities. Apples produce ethylene, which will hasten the ripening process.