Your family will love running up  and down the hills at the Garden's 27th garden, the Nature Play Garden. The garden features a series of multisensory areas. It has sugar maple, aspen, and redbud groves and an expansive lawn that has a runnel, rolling hills, a willow tunnel, boulders for climbing, and natural “rooms” defined by arborvitae and hornbeams.

The Nature Play Garden is part of the Regenstein Learning Campus, the home base for the Chicago Botanic Garden’s plant-based, immersive nature experiences and classes. (The Grunsfeld Children’s Growing Garden and Kleinman Family Cove, opened in 2012 as part of the initial phases of the Campus.)

Horticulturists selected the garden’s flowers and trees for qualities such as color, scent, texture, and even sound (the sweetgum trees have seedpods that rattle); more than half of the perennials are new to the Chicago Botanic Garden.

The Nature Play Garden hills and lawn are open mid-April through mid-November (closed in winter). 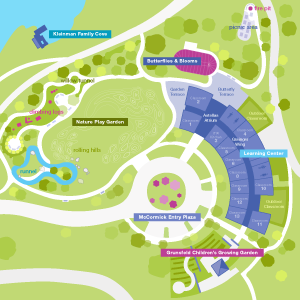 Click the map for a larger view of the Regenstein Learning Campus.