Birds and fish fall from trees, sheep grow on bushes: The importance of zoophytes 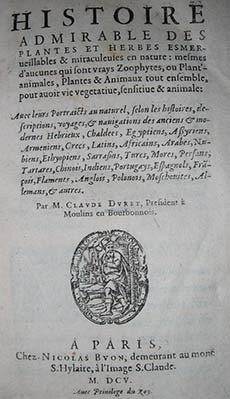 Imagine a tree dropping not leaves from its branches, but birds or fish. Think about bushes that yield sheep as their fruit, rather than ordinary berries. These creations existed in the imaginative medieval world, and persisted well into the Renaissance. We can find a summary of these combinations of plants and animals, or zoophytes, in Claude Duret's wonderful Histoire admirable des plantes et herbes esmerueillables & miraculeuses en nature, published in 1605 in Paris. A copy of this delightful and inspirational work can be found in the Garden's Rare Book Collection.

According to the second edition of the New Oxford American Dictionary, a zoophyte is "a plantlike animal, esp. a coral, sea anemone, sponge, or sea lily," derived in the early seventeenth century, from the Greek zoiophuton. We might think about modifying this definition in light of Duret's tome, to include plants with very animal-like characteristics, especially an ability to produce animals of various varieties as offspring.

One of my students in the Graduate School of Library and Information Science at Dominican University, Madeline Grzanich, examined this book more closely as part of her efforts in my History of the Printed Book class. She argued that some of the problems with zoophytes, and especially the most famous one known as the lamb of Tartar or Borometz, may have been linguistic. All of the fantastic stories about zoophytes may have been constructed from misinterpretations of ancient accounts, where a copyist may have inserted a wrong letter or phrase, completely changing the meaning of a passage. In spite of these typographic errors, there were many ready to believe in these unusual plant-animals.

Not much is known about Claude Duret, other than that he was a judge and lawyer, born in 1570 in Moulins, capital of Bourbonnais, a little less than 200 miles south of Paris. He died in September 1611. He was known to be a good friend of Olivier de Serres (1539–1619), author of the most important book on agriculture in France at the time. His father, Louis Duret (1527–86), was a physician to kings Charles IX and Henri III. His older brother, Jean (1563–1629), was also a physician. Claude's son, Noël (1590–1650), was mathematician and astronomer for Louis XIII. It's obvious that Claude was immersed in an intellectual and scientific atmosphere, well connected, and curious about the world around him. Perhaps these relatives and friends encouraged Claude to organize his most famous treatise, an anthology of stories about zoophytes. 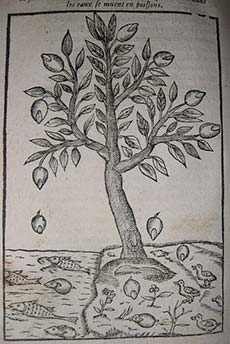 Given his father's Parisian ties, the choice of Nicolas Buon, an important printer in Paris, was well calculated. Buon is perhaps best known for publishing Hugo Grotius's (1583–1645) De iure belli ac pacis in 1625. This significant work on the law of war was dedicated to Louis XIII. In any case, Claude knew that his published efforts would receive far more attention, and circulation, in the hands of an important Parisian publisher, rather than a provincial printer in Moulins.

The notion of zoophytes was certainly under scientific pressure when Duret was organizing this book. Renaissance scholars were beginning to question accounts of plants producing animals. With greater exploration of the world, no one could claim to have seen a zoophyte in situ. Nevertheless, zoophytes turned up in the most peculiar places. Let's look at the case of Sir Richard Lee, Queen Elizabeth's ambassador to Russia.

Richard Lee was sent to Russia by Elizabeth I in June 1600 to encourage trade between Great Britain and Russia. Lee was well received in Moscow, especially by Boris Fyodorovich Godunov (1551–1605) and the Court. Unfortunately for Lee, he was never quite able to complete trade negotiations as expected. According to John Appleby, writing in the pages of Notes and Records of the Royal Society of London, Godunov admired Lee's large agate mortar and pestle. Via Godunov's physician, a trade was arranged of a coat made from the pelts of lambs of Tartar (a most significant zoophyte) for the mortar and pestle. Lee returned to Elizabeth's Court in 1601, with all good intentions of presenting this special cloak to the Queen. Elizabeth, however, was not pleased with Lee's failure to conclude a trade deal, and refused to reimburse Lee for the expenses of his long trip. Lee decided that if the Queen did not pay for his royal excursion, she also did not need a special zoophytic coat, so he kept it. In 1602, Thomas Bodley opened his Bodleian Library at Oxford, to which Lee donated some Russian books. Lee was impressed with the Bodleian, and upon his death in 1608, his will stated that the special cloak would be given to the Bodleian Library. The coat has since vanished without a trace.

The most famous zoophyte,
the lamb of Tartar

Evidence continued to accumulate that the most famous zoophyte,
the lamb of Tartar, was a ruse. Conclusive details were collected by Engelbert Kaempfer (1651–1716), as a member of a royal mission to Arabia on behalf of Swedish king Charles XI. Kaempfer was able to thoroughly investigate the Borometz's reputed existence, including interviews with eyewitnesses. In Kaempfer's magnum opus, Amoenitatum exoticarum, published in 1712 or a little over a century after Duret's zoophytic collation, the lamb of Tartar was finally demolished as a myth.

Well into the nineteenth century, there were continued efforts to unravel the origin of these stories about zoophytes. Some were exposed as mistranslations; others as misidentifications, with more modern understandings of the basic differences between animals and plants. Finally, the continued fascination with zoophytes profited those exporting "skins" and offspring of these strange hybrids, so it took time for these marketers to find other goods to pawn off on the gullible.

The story of zoophytes then is the story of modern biological science grasping with its own growing pains, throwing off legends and mysteries with careful observations and greater knowledge of the mechanics of life. These ancient stories certainly fascinated Claude Duret, to whom we can be grateful for collecting, preserving, and illustrating them from texts now lost. Duret did not really justify the existence of the Borometz and its kin; he merely cataloged and collated information to provide a view of a very unnatural world, a medieval menagerie made of dreams and fantasies.