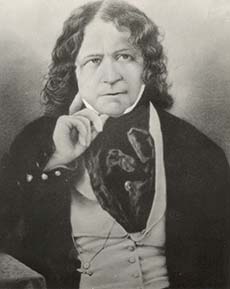 Heir apparent to his uncle's considerable reputation as a physician and botanist, William P.C. Barton (1786–1856) created one of his most significant works, Vegetable materia medica of the United States, or, Medical botany (1817–18), early in his career. It established his standing as an experienced professional, able to distinguish between myth and fact about many American native plants. How much did William P.C. Barton (shown above) owe his famous uncle, Benjamin Smith Barton (1766–1815)? A close examination of Vegetable materia medica provides some clues. 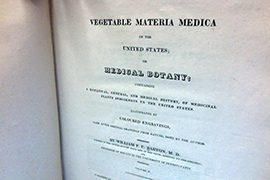 The Lenhardt Library of the Chicago Botanic Garden includes in its collection an exceptional copy of Vegetable materia medica, two volumes published in 1817 and 1818. The first edition of this set is a presentation copy. (A second edition appeared in 1825.) Barton gave this first edition to William Tilghman (1756–1827) on July 4, 1818. Tilghman, in turn, left his signature on the title page of volume 1. Chief justice of the Pennsylvania Supreme Court, Tilghman also ran (unsuccessfully) for governor of Pennsylvania, and was resident of the United States' first scientific society, the American Philosophical Society.

William P.C. Barton certainly owed much to his uncle, as his most accomplished student. William Barton's Vegetable materia medica is indebted to Benjamin Smith Barton, but it is not a compilation of archival notes and records. William Barton makes quite clear in his introduction that he clearly worked without the written assistance of his uncle:

"It is highly probable that among the manuscripts which were left by the late Professor Barton, much interesting information on this subject might be collected. His well known inquisitiveness, and his constant habit of recording, in however desultory a manner, the facts with which his enquiries made him acquainted, warrant the belief, that the public are deprived of some curious and very interesting knowledge, in consequence of the cloak which has been thrown over his collections. Strange as it may appear, it is not the less true, that not a single one of these manuscripts, not even his lectures on Materia Medica has ever seen the light. The public is yet to be informed if what has become of the industrious collections of that eminent man; and it is sincerely hoped they have not been recklessly destroyed. Though the author of this work, his own nephew, was engaged in the same pursuits which occupied much of the time and attention of the late Professor, not a single line of his manuscripts has ever been put into his hands, or seen by him; nor was his opinion ever asked about the disposition of them. But on the contrary, he was refused a sight of such memorandums and notes as were asked to enable him to write an authentic account of his life, when called on to so do by the Philadelphia Medical Society, of which the Professor, at the time of his decease, was president. It has been deemed proper to make this public avowal, because it has been mentioned to the author, that some persons supposed him possessed of all the papers and collections of the late Professor Barton, designing by such intimation, to deprive the author of whatever credit his persevering exertions, in spite of discouraging and opposing obstacles, may have deserved."

William Barton points out in this disavowal that there were manuscripts of his uncle's lectures on medical botany at the University of Pennsylvania that were sold to Thomas Dobson (1751–1823)—one of most important booksellers and publishers in Philadelphia. Dobson elected not to publish Benjamin Smith Barton's lectures; the fate of those manuscripts is unknown.

There is more evidence in the descriptions of plants in W.P.C. Barton's Vegetable materia medica, providing clues to intellectual sources. In Volume 2, Barton analyzes Hydrastis canadensis, a herb known also as goldenseal. Under the section "Medicinal properties," Barton notes that Hydrastis:

"The medicinal properties of Hydrastis reside in the root. When dried, it has a strong and somewhat narcotic smell, and it is exceedingly bitter. Hence spirituous infusions of it are used, and recommended by country practitioners, for their tonic effect. It is common practice in some parts of the country, particularly in Kentucky, in the vicinity of the falls of Ohio, to use a cold, strained infusion, in inflammation of the eyes. This fact was known to the late Professor Barton who has mentioned it in his Collections; and on his authority it has been introduced into our Dispensatories. This plant has been described to me by a gentleman of my class from Kentucky, as being much used in the manner just mentioned. The commendations which have been bestowed on yellow-root, have, unfortunately, not been confined, as perhaps they should have been, to the bitter-tonic virtues which it indubitably possesses; but a mere supposition, rather inadvertently thrown out by the late Professor Barton, that "the Cherokee Indians employ a plant in the cure of cancer, which is thought to be Hydrastis," has caused some persons to attach to its other medicinal qualities, the questionable power of curing or alleviating cancer; and it is much to be regretted that Dr. Dyckman in his valuable edition of the Edinburg Dispensatory, has mentioned cancer as one of the diseases for which Hydrastis is a remedy. It is, I believe, not to be doubted, that there is scarcely a plant distinguished for any medical powers that is not, in some part or other of our country, commended by the vulgar, as a cancer-remedy. The almost irremediate nature of that disease by any other means than the surgeon's knife, is the obvious cause of such perpetual recurrence to a multitude of remedies, which have, in all probability, no other claim to the nature of cancer-remedies, than that which exists in the imaginations of the credulous persons who employ them, and whose temerity in the indiscriminate use of active plants in the treatment of this disease, is unrestrained by that fear, which knowledge inspires, and uncontrolled by a sense of the danger of using acrid or irritating applications. I have made some trials with the pulverised root and spirituous tincture of Hydrastis; and these sufficiently justify me in recommending it to the notice of physicians as a strong tonic bitter. Yet I confess myself unwilling to believe that the plant is possessed of any properties sufficiently active, or of such a nature, as to lead to any reasonable expectation of being serviceable in cancers; though it is probable enough that it is one of the numerous vegetable bases of the many quack medicines for this disorder." 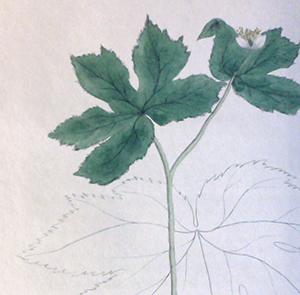 A careful parsing of this long paragraph would indicate that William Barton did not like Benjamin Smith Barton's analysis that Hydrastis is a successful remedy for cancer. That inference has led, in William Barton's diplomatic words, to "many quack medicines."

Turning to Benjamin Barton's description of Hydrastis in the third edition of Collections, he indeed notes on page 9 the use of Heuchera americana (alumroot) with Hydrastis canadensis by the Cherokee as a cure for cancer. But Benjamin Barton clearly states that this "Cheerake" cure does not work:

"I do not believe that the Heuchera has cured genuine cancer: but it seems certain, that it has proven beneficial in some obstinate ulcers, which have been mistaken for cancer."

Benjamin Barton would take issue with Wikipedia and its article on Hydrastis, which states that:

"Prof. Benjamin Smith Barton in his first edition of Collections for an Essay Toward a Materia Medica of the United States (1798), refers to the Cherokee use of goldenseal as a cancer treatment."

This same Wikipedia article points out that Hydrastis, according to the American Cancer Society, is not useful in treating cancer or any other diseases.

William Barton accuses obliquely both Benjamin Smith Barton and Jacob Dyckman (1788–1822), contributor to one of the most popular medical books in the eighteenth and early nineteenth centuries entitled the Edinburgh dispensatory, of quackery. Benjamin Barton simply noted that Hydrastis was used by some Native Americans in a medicine to fight cancer, but that there was no support for its efficiency in that regard. Did William Barton misread Collections, assuming no reader would check his interpretation? Or was it intentional? I would argue that William Barton was mistaken in his reading of Hydrastis from Collections, simply based on reading other entries in Vegetable materia medica.

Take William Barton's description of Lobelia cardinalis, the cardinal flower. In his analysis of its medical properties, he points out that:

"Little, however, seems to be known with certainty, of its powers; the chief claim it has to notice as a medicine, being derived from the circumstance of the Cherokee Indians using it successfully to expel worms."

William Barton, in this case, does not indicate that his source for this fact was Benjamin Barton's Collections, where you will find on page 40 the following sentence:

"The Cheerake use a decoction of the root of the beautiful Lobelia Cardinalis, or Cardinal–Flower, as a remedy against worms."

"Of the medicinal powers of this plant, I am not able to state any thing from own experience; but am of opinion that its sensible properties, its reputed powers, and the well known activity of the genus to which it belongs, fully entitle it to further notice." 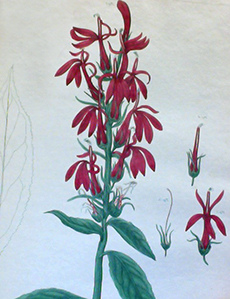 In this example, William Barton does disparage past and present colleagues, but simply states what he does not know about Lobelia.

We have to look a little farther afield to wonder why William Barton was sensitive to his reputation at the time of publication of Vegetable materia medica. Barton was court martialed late in 1817 on two counts of conduct unbecoming to an officer and a gentleman, for his efforts to become surgeon at the Philadelphia naval hospital. This case is famous legally because President James Monroe (1758–1831) was subpoenaed to provide evidence of William Barton's meetings with the president on the post. Certainly this case would have influenced Barton in his construction of Vegetable materia medica. Barton knew that this book would be read not only by fellow physicians, but by the public. Why not paint yourself in a favorable light as an objective researcher on the medical properties of American plants? In any case, Barton's court martial was settled on February 11, 1818, with Barton found guilty of attempting to have Thomas Harris removed as surgeon in the Philadelphia Navy Hospital, but was acquitted of a "willful and deliberate falsehood."

William Barton, in spite of this case, had a spectacular medical career in the navy, culminating in his appointment as first chief of the Bureau of Medicine and Surgery on September 2, 1842, by President John Tyler (1790–1862). In part, Vegetable materia medica may have played some part in the notable success of William Barton in nineteenth century America, far beyond its botanical descriptions and medicine.