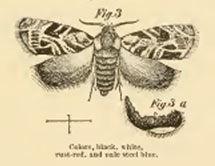 Imagine the audacity of Benjamin Walsh! He challenged Charles Darwin's harshest critics in the United States. He patiently survived the Illinois legislature and governor over his appointment as state entomologist. He chased after insects landing near railroad tracks, only to be hit by a locomotive, after which he self-deprecatingly joked about his accident and artificial limb. 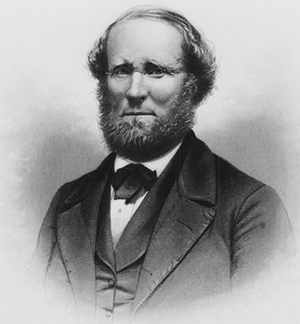 Benjamin D. Walsh (1808 – 69) was the first official state insect specialist for Illinois, but not without controversy. In the introduction to his first report, Walsh hints at his difficulties with a Civil War veteran governor and recalcitrant state assembly. This report is simply but beautifully entitled "First annual report on the noxious insects of the state of Illinois." It was originally published in 1867 as part of the Transactions of the Illinois State Horticultural Society. Given Walsh's Springfield troubles, one might wonder if there is a special substance in the waters or air in the capital of Illinois; Plus ça change, plus c'est la même chose.

Members of the State Horticultural Society lobbied in Springfield for the appointment of Walsh, having the vision that a proper assessment of insects in Illinois might lead to greater floral productivity. Unfortunately for Walsh, his nomination was tied to more political appointments, so his official ascendancy was delayed. Walsh had no time for politics though he had no official funds (he had been allotted $2,000 per year by the assembly) or title. There were insects to be described, and nature does not halt for political inertia. Embarrassed members of the Horticultual Society set aside $500 for Walsh, which he politely refused.

Walsh was facing considerable headwinds in having the public (outside members of the Horticultural Society) understand the significance of insects. Perhaps these facts might explain his Springfield troubles. The public failed to appreciate the incredible variety of insects; today we recognize some 900,000 species of insects, representing at least 80 percent of all species. Taxonomists agree that there are at least twice as many species of insects in the world; hundreds of thousands awaiting discovery and description.

For Walsh's fellow Illinoisans, a grasshopper was simply a grasshopper (see Figure 1). They saw no distinction between Melanoplus differentialis and Taeniopoda eques. Walsh lamented that problem and squarely blamed an educational system that ignored science:

"The blame, in reality, lies with our wretchedly defective School System, which persists in tearing the brains of young children to pieces with useless acrobat-feats of the intellect, as are dignified by the name of "Mental Arithmetic," while it utterly neglects to instill into their minds the commonest rudiments of Natural History. Here we are perpetually dinned with nonsensical theories about "THE borer," "THE fly," "THE bug," "THE grasshopper," etc., etc., as if there was respectively but ONE species of borers, of flies, of bugs and of grasshoppers within the limits of the United States! Whereas in reality there are hundreds of distinct species of them, differing one from the other as widely as a sheep from a goat, or a cow from a deer, or a horse from a hog." (p. 136 of the "First annual report on the noxious insects of the state of Illinois.")

Walsh saw the importance in distinguishing different species of organisms, but saw problems with his scientific colleagues. He had no patience for those entomologically enlightened brethren who delighted in taxonomic obfuscation:

"To my mind, the naturalist who rakes up out of the dust of old libraries some long-forgotten name, and demands that it shall take the place of a name of universal acceptance, ought to be indicted before the High Court of Science as a public nuisance, and on conviction sent to a Scientific Penitentiary, and fed there for the whole remaining term of his scientific life upon a diet of chinch bugs and formic acid." (p. 32)

Walsh had little tolerance for fellow entomologists who failed to admit to their errors:

"There is not an entomologist, living or dead, in any country of the known world, who has not, at one time or another, made such mistakes; and I am not ashamed to confess that I have repeatedly myself blundered in the same manner. … And here lies the difference between the men that write for victory and the men that write for truth. The latter frankly confess their errors as soon as they become aware of them; the former claim to be infallible, and never will allow that they have been in the wrong." (p. 83) 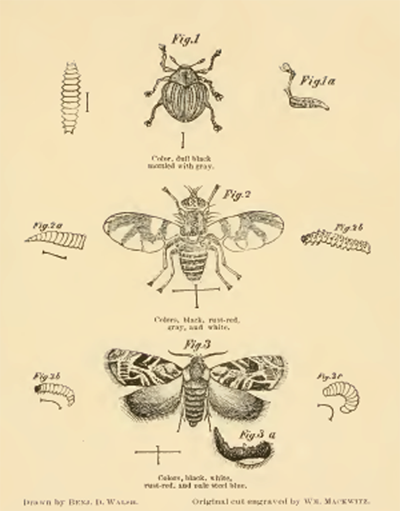 Walsh realized that the public saw all insects as pests, taking quite a Biblical perspective ("All winged insects that go on all fours are detestable to you." Leviticus 11:20) on these creatures. Farmers read reports in the popular press of invasions of the "Hateful Grasshopper" (Caloptenus spretus) between the slopes of the Rocky Mountains and the Mississippi River. They assumed it was merely a matter of time before this insect army crossed that natural boundary and moved eastward.

Part of the problem was seeing all grasshoppers as a singular species, rather than several distinct organisms. Secondly, there was a lack of evidence for the mass migration of Caloptenus spretus from its nearest confirmed locale to Illinois:

"Consequently, it is unreasonable to suppose, knowing what we do of the habits of the Hateful Grasshopper, that that insect could have flown from the very centre of Iowa — the nearest point to Illinois where it is known to have occurred in the autumn of 1867 — over the whole of the eastern half of Iowa and at least two counties in Illinois, without leaving any signs of its journey on the road, and have subsequently appeared in one or more of the interior counties of Illinois in September, 1867. Hence, so far as indirect evidence goes, it is utterly improbable that the Grasshoppers...could have belonged to the Rocky Mountain species. It is very true that there is no direct evidence, that the Grasshoppers found in Illinois in Marshall and Washington counties during September, 1867...were not the veritable Hateful Grasshoppers of Kansas, and Nebraska, and Western Missouri, and Western Iowa... . (pp. 135-136)

Walsh's report was written not for oft-criticized entomologists but the everyday reader. Walsh saw his mission as educational and scientific in that order:

"In preparing this document, I have aimed to use only such language, as will be intelligible to any one who has had a good Common School education, with one single exception. I have throughout, after giving the English names of insects, added the scientific names, printed in italics and enclosed in a parenthesis (  ). The general reader will find the sense always complete without the parenthesis in italics; and therefore all that he has to do, in order to avoid those technical names which are so distasteful to many, is to skip over entirely, as he reads on, every parenthesis (printed in italics)." (p. 8)

As Carol Sheppard points out in her 2004 paper on the impact of Walsh on science in nineteenth century America, it may not have been Walsh's educational efforts that had long-lasting consequences, nor his insect collecting. His enormous collection, numbering 30,000 speciments, was purchased by the state of Illinois and deposited in alleged fireproof facilities of the Chicago Academy of Sciences. The great Chicago Fire of October 1871 incinerated Walsh's insects forever. Instead, it was Walsh's defense of Charles Darwin (1809 – 82) that has had repercussions to this day. Sheppard notes that Walsh found support for Darwin and evolution in the field, proof for Darwin's concept of a species, as well as Darwin's notions of complex evolutionary interrelationships between insects and plants. Walsh wrote about his Darwinian confirmations in his scientific publications within a few years of the appearance of the On the Origin of Species in print in America, making him one of the first scientists in the world to see Darwin's ideas literally come to life in the natural world. 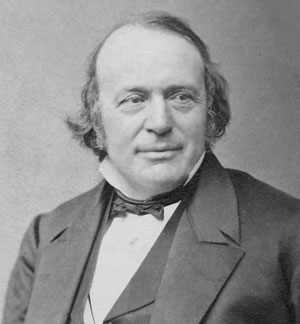 Because of this evidence, Walsh took on the entire American anti-Darwinian establishment, which was centered in Boston around Louis Agassiz (1807 – 73). Agassiz singlehandedly established natural history in New England, yet, in spite of his scientific experiences in zoology and paleontology, was a profoundly stubborn creationist. Walsh's only scientific company in the defense of Darwin on this side of Atlantic was none other than botanist Asa Gray
(1810 – 88). It was Gray who helped Darwin find an American publisher for the Origin of Species a few months after the release of the work in London in November 1859. Both Walsh and Gray acted as Darwinian "bulldogs" in America, much like Thomas Henry Huxley (1825 – 95) in England.

Fortunately, we have excellent evidence of Walsh's relationship with Darwin, thanks to a cache of 18 letters preserved in the Library of the Field Museum. These letters arrived as a gift to the Museum in 1948 with a portion of Walsh's library. These letters enthusiastically speak of Darwin's support for Walsh's interpretations of species and his battles with Agassiz (you can find transcripts of all of the Walsh-Darwin correspondence online at Cambridge's Darwin Correspondence Project, www.darwinproject.ac.uk).

On Agassiz, Walsh wrote the following to Darwin in a letter dated November 7, 1864:

"I do not know what the European Scientific World thinks of Agassiz, but here he is popularly considered as the incarnation of Science & as infallible as the Bible. He strikes me as a very much overrated man, who perpetually allows his imagination to get the better of his judgement, & who not unfrequently argues for victory instead of for truth."

"I am delighted at the manner in which you have bearded this lion in his den. I agree most entirely with all that you have written. ...I am so much accustomed to be utterly misrepresented that it hardly excites my attention. But you really have hit the nail on the head capitally. All the younger good naturalists whom I know think of Agassiz as you do; but he did grand service about Glaciers & Fish."

Most importantly for Darwin, Walsh provided offprints of his scientific papers with his letters. These pamphlets described discoveries in the field by Walsh that were verification of concepts described originally in the Origin by Darwin. In the fifth and sixth editions of the Origin, Darwin incorporated these proofs by Walsh. Walsh's untimely death by locomotive in November 1869 halted his continued collection of evidence as well as their delightful and frank correspondence.

Today, you can find the grave of Benjamin Dann Walsh in the Chippiannock Cemetery in Rock Island, Illinois. Somewhere in Springfield or Chicago, there should be an enormous statue to this scientific giant, who defied Victorian ignorance, scientific luminaries, Springfield political hacks, and even a locomotive. At its base, an inscription should be found, quoting from one of Walsh's letters to Darwin: Meipso totus, teres, atque rotundus. Roughly translated, this quotation from Horace reads, "Alone, but not solitary."