Sebastien Vaillant, precursor to Linnaeus, and the flora of Paris 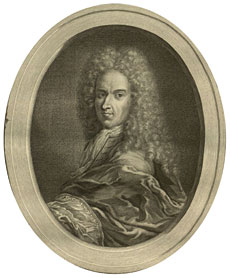 Sebastien Vaillant (1669–1722) was one of the most important scientists of his time in the early eighteenth century, organizing the King's garden in Paris, systematically describing the flora of Paris and its environs, and communicating with colleagues and students all over the European continent. We know him today for his beautiful Botanicon Parisiense, published five years after his death in the Netherlands. This work itself is surrounded in mysteries, but scientifically Linnaeus trusted much of the content for inclusion in his magnum opus Species plantarum, the first global inventory of plants.

Vaillant recognized the importance of the sexual anatomy of plants, before Linnaeus and many others in the eighteenth century. Some might argue that it was Vaillant who provided at least some of the intellectual fodder for Linnaeus in his taxonomic analysis of life on Earth. In any case, Vaillant announced his ideas quite clearly in a lecture at the Jardin du roi in Paris on June 10, 1717. Historian Roger Lawrence Williams, in his masterful work Botanophilia in Eighteenth-Century France (2001), notes that Vaillant's lecture on that fateful morning was the true beginning of modern botany. For the students present at the lecture, it was both entertaining and shocking, because Vaillant was quite blunt in making analogs between plant and human sexuality (much like Linnaeus later in the century). It was a stunning lecture as well for essentially criticizing Joseph Pitton de Tournefort (1656–1708), the reigning authority on plant anatomy in France. Vaillant could not ignore some of Tournefort's errors (even if he was Tournefort's most significant and successful student in Paris), such as calling stamens mere excretory devices.

Vaillant's criticism certainly was not unnoticed, and he encountered the displeasure of members of the French Academy of Sciences (which had been established in 1666 by Louis XIV). It may have meant that Vaillant would have opposition to publishing his then-radical views on plants, revolutionary in their own. It would have also been difficult for Vaillant to find a French publisher for his flora of Paris. Here is where the story becomes even more interesting.

Vaillant was a member of the French Academy and important in his own way to the botanical research in France at the time. He introduced into Paris the whole notion of constructing greenhouses, and lectured frequently to students and the public on plants, contributing to a growing interest in all things botanical. Legend has it that his work on the flora of Paris was incomplete at the time of his death, and that his Dutch colleague and friend Herman Boerhaave volunteered to take over the work and see that it was published and widely distributed. This legend is essentially taken from the introduction to Botanicon Parisiense and appears today in a variety of forms, even in Wikipedia.

W.L. Tjaden discovered the real story behind the publication of Botanicon Parisiense through a careful examination of correspondence among Boerhaave, Vaillant, and other individuals, especially British botanist William Sherard (1659–1728). Sherard seems to have played an important role in helping Vaillant seek publication of his flora of Paris outside of France in the Netherlands, thanks to the incredible financial and intellectual support of Boerhaave. Sherard was well acquainted with the politics of botany in France, having spent a great deal of time at the Jardin du roi, attending lectures by Tournefort. If anything, Sherard recognized the significance of Vaillant's work on the flora of Paris, since it really was the first modern flora in history, utilizing Vaillant's new discoveries on plant anatomy.

Based on letters available in the Royal Society and elsewhere, it seems that Vaillant and Boerhaave were working together as early as 1718, some four years before Vaillant's death, on publication projects that certainly included his lectures on plant anatomy and the flora of Paris. These letters contradict the legend that Boerhaave promoted in Botanicon Parisiense of completing for publication an incomplete work given to him after Vaillant's death in 1722. 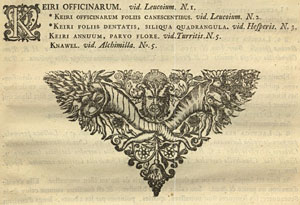 Vaillant, Boerhaave, and Sherard had plenty of other commitments to prevent completion of Botanicon Parisiense in a timely fashion. The publication needed to be well illustrated, since it focused so heavily on the anatomy of specific plants. This illustrative work could not be left to just any artist so Boerhaave engaged, at considerable personal expense, the expertise of engraver Jan Wandelaar (1690–1759). Wandelaar was responsible for the excellent engravings in Linnaeus's Hortus Cliffortianus (1737).

Botanicon Parisiense represented nearly four decades of work by Vaillant in and around Paris. His manuscript was carefully edited and checked by Boerhaave and other colleagues, and there seems to have been an exchange of dried specimens of the plants, figured in the work in advance of publication, to ensure accuracy of the final illustrations. Indeed, there was some concern on Vaillant's death about the sale of his cabinet by his widow to Louis XV for 12,000 livres (a breathtaking sum at the time), if some specimens were no longer accessible. In the end, Botanicon Parisiense set a standard to be matched only by Linnaeus in the eighteenth century with his Hortus Cliffortianus. Every flora that we use today can trace its origins back to Vaillant's groundbreaking efforts in understanding the true meaning of plant anatomy and in turn applying those discoveries to plant communities in his own neighborhood. It was an inspirational work at its original publication, and Botanicon Parisiense remains a riveting and beautiful work to this day.