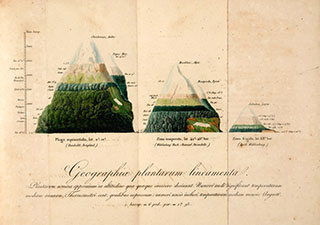 "While with all Flora's perfumes fraught,
And rich in Nature's matchless glow,
The poor man's jewels, gems unbought,
Bright in the varied border blow. "
— Maria Henrietta Montolieu
The enchanted plants, and festival of the rose, with other poems
(London, 1822)

Flowers, like precious stones, welcome spring. We cheer their marvelous display each year, and, with wonder, guess how they survive in frozen soil and silt each winter. How do plants take advantage of their soil medium?

The interaction of plants with soil and rock has been guessed about for millennia. Certainly Aristotle and Theophrastus, some 2,300 years ago, were aware of the significance of soil health in the development of crops and trees, noting the use of lime and fertilizers. Theophrastus, for example, noted that:

"The seeds are also classified according as each suits a particular soil; in wintry lands wheat is sown rather than barley, and in general they say that corn rather than leguminous plants should be sown in barren soils which are only disturbed at long intervals; and such soils bear wheat better than barley. Moreover wheat welcomes abundant rain more than barley, and bears better on land which is not manured. In like manner they distinguish among wheats themselves which suits which kind of soil, namely which grows best in good fat soil and which in crumbling light soil, and so on with other kinds of soil." (From the Loeb Classical Library translation of Theophrastus' Enquiry into plants, originally published in 1916).

The Lenhardt Library at the Chicago Botanic Garden includes in its collection the editio princeps of Theophrastus, published in 1483 (see my column on Theophrastus for more details).

It was not until the nineteenth century that a closer relationship between geology and flora emerged. Alexander von Humboldt's (1769–1859) great expeditions to Latin America and South America (1799–1804) led to many discoveries in diverse disciplines, but especially in geology, botany, and ecology. It was von Humboldt who first described the variations of plants with altitude in his De distributione geographica plantarum secundum coeli temperiem et altitudinem montium (1817). A copy of this work, first published in Paris, can be found in Lenhardt Library's collection, along with the first English translation, published in 2009 by the University of Chicago Press. 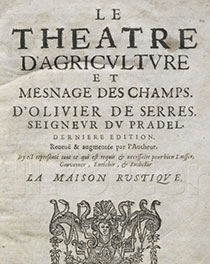 You can find the 1663 Rouen edition of Le the theatre d'agriculture et mesnage des champs in the Lenhardt Library.

It was appropriate that von Humboldt noticed the variation of plants with altitude, given his repeated climbs on peaks in Venezuela, Colombia, and, most famously, Ecuador. In the absence of proper mountain climbing gear, von Humboldt's treks easily captured the imagination of many in Europe, including Johann Wolfgang von Goethe (1759–1832). The climbing attempt by Humboldt and his colleagues on what was thought to be the highest mountain in the world, the volcano Chimborazo in Ecuador, 20,564 feet above sea level, certainly provided evidence for a plant and altitude relationship. It is not surprising that von Humboldt included Chimborazo in his graphic illustration of this floral change with height (shown at the beginning of this article).

But as Arthur Kruckerberg argues in his delightful book Geology and plant life (University of Washington Press, 2002), von Humboldt did not specifically record a relationship between plants and lithology (or rock composition). French studies on agriculture certainly pointed to a relationship between soil and crops, best described as terroir. Olivier de Serres (1539–1619), in his Le theatre d'agriculture et mesnage des champs, noted that "the fundamental task in agriculture is to understand the nature of the terroir, whether it is the land of your ancestors or land recently acquired" (translation from Amy Trubek's The taste of place: A cultural journey into terroir; University of California Press, 2008). But notions of terroir, at least in the eighteenth and nineteenth centuries, never completely correlated specific plants to certain kinds of rocks.

A correlation of flora to specific geological features was finally accomplished by Franz Unger (1800–70). Unger arrived in Kitzbühel, in Tyrol, Austria, as a physician, spending his spare time trying to understand the geology of the area and well as the local flora. He discovered that the Kitzbühel Alps consist of two very different rocks—slates (metamorphic version of shale) and limestones. The limestones were covered with a very specific and diverse flora, consisting of mountain pines, rhododendrons, saxifrages, and sedges. The slates had a different assemblage of plants, including alder, alpine rose, and bellflowers. Unger concluded that the underlining chemistry of the rocks (silica-rich slates vs. calcium carbonate-rich limestones) controlled the appearance of certain species and the absence of others. These ideas on plant ecology and geochemistry first appeared in Ueber den Einfluss des Bodens auf die Vertheilung der Gewächse: Nachgewiesen in der Vegetation des nordöstlichen Tirol's, published in Vienna in 1836. 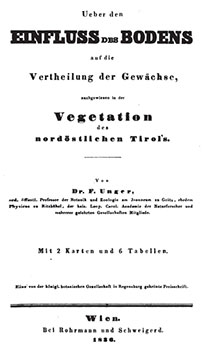 A copy of this work is in the rare book collection of the Lenhardt Library.

Unger's ideas were controversial at the time, but the evidence literally was on every mountain slope in the Alps. Anton Kerner von Marilaun (1831–98) saw the same floristic differences between slates and limestones, the most abundant rocks in alpine landscapes. He wrote:

"Even the ordinary tourist, who is not at all concerned with the geological structure or the plant life of the lands he tours, must notice the contrast presented by the longitudinal valleys of the Alps between the calcareous mountains on the one side and the crystalline mountains on the other" (translation from Kruckerberg's Geology and plant life).

Kerner's works, such as The natural history of plants, their forms, growth, reproduction, and distribution (1895–96; in the Lenhardt Library), were translated into English and reached a large and influential audience.

Both Unger's and Kerner's notions directly influence the father of American ecology, the University of Chicago's Henry Chandler Cowles (1869–1939). Best known for his studies of ecological succession in the Indiana Dunes, Cowles recognized the significance of lithology on plants in an unfortunately obscure paper published in 1901, entitled "The influence of underlying rocks on the character of vegetation." Published in the second volume of Bulletin of the American Bureau of Geography (headquartered in Winona, Minn.), Cowles wrote:

"It is a matter of common observation that different soils have different plants. Everyone expects to see a change in the natural forest covering, as he passed from one soil to another. For example in many parts of the United States pines and oaks are found in sandy soil, while maples and beeches are found on the clay. So true is this that in many places a bird-eye's view of the forest is sufficient to indicate the nature of the soil. One may even go farther; in many places it is possible to tell the nature of the rock by means of the trees that grow above it. This implies, of course, that the residual soil which arises thru rock decay varies with the character of the rock from which it comes."

Cowles, Kerner, and Unger in turn inspired generations of botanists, ecologists, and geologists to look for more specific patterns of relationships between plants and geology. The most startling appeared very recently in a paper in the journal Economic Geology.

Stephen E. Haggerty, of Florida International University, is an expert in kimberlite pipes, very special geological structures that carry magma from deep within the earth to the surface. Kimberlite pipes are important economically because most of the world's diamonds are found in them. Professor Haggerty noted that a specific plant, Pandanus candelabrum, appears in kimberlite pipes in Liberia. P. candelabrum seems to have developed an affinity for magnesium, potassium, and phosphorus found in kimberlite-derived soils. Given that one of the pipes yielded diamonds, including one specimen larger than 20 carats, Pandanus may provide an easier way of locating kimberlite dikes in the difficult terrain of Liberia, and perhaps elsewhere in Africa.

This research would not have been possible without the fundamental discoveries of Franz Unger and Anton Kerner von Marilaun in the nineteenth century, recognizing ecological patterns in the Alps. The economic significance of their research was not considered for decades, only after repeated verification of their correlations outside the Alps.

"Basic research is performed without thought of practical ends. It results in general knowledge and an understanding of nature and its laws. This general knowledge provides the means of answering a large number of important practical problems, though it may not give a complete specific answer to any one of them. …One of the peculiarities of basic science is the variety of paths which lead to productive advance. Many of the most important discoveries have come as a result of experiments undertaken with very different purposes in mind."

Bush would have appreciated learning the consequences of Unger's and Kerner's research. Work done in the nineteenth century Alps yielded results centuries later in the wilds of twenty-first century Liberia.