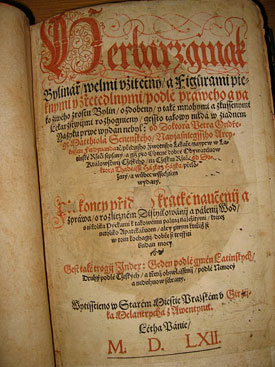 Pietro Andrea Mattioli's (1500–77) Herbarz (1562) was one of the most significant editions of Mattioli's commentary on Dioscorides (circa A.D. 40–90). It was a reference herbal for Renaissance physicians. It is also one of scarcest herbals, with less than a handful of copies extant in North America. Herbarz is one of my favorite books in the Lenhardt Library, just because of the sheer personalities involved in the creation of this work.

For example, consider the illustrator for this magnificent folio. Giorgio Liberale (1527–c.79) created large and impressive woodcuts of plants for Herbarz. They were larger than any that had appeared in Mattioli's earlier editions. The sheer size of these woodcuts provided a great deal of anatomical detail, which was impressive given that the earliest edition was not illustrated at all. What a modern notion!

Remarkably, Liberale's actual woodcuts have survived to this day. They were "recycled" to create illustrations in various monographs for centuries, most famously by Henri-Louis Duhamel du Monceau (1700–82). Duhamel du Monceau reused Liberale's woodcuts in his Traite des Arbores Fruitier (1755), one of most important and valuable works on fruit trees. In 1956, the contents of Duhamel du Monceau's chateau were dispersed, including the woodcuts. Some of these original wood blocks can now be found in the Hunt Botanical Library in Pittsburgh.

Let's consider some of the other characters involved in this book. There is one polymath I certainly would have loved to know in person, Thaddaeus Hagecius or Tadeáš Hájek (1525–1600), a Renaissance man among Renaissance men. Hagecius was nominally a physician in the court of the Holy Roman Emperor, so he was well acquainted with his colleagues in the court such as Liberale, who was an artist for Ferdinand I (1503–64).

Hagecius was also a mathematician and astronomer, perhaps best known for his confirmation of Tycho Brahe's (1546–1601) observation of what we now know as a supernova in 1572. In his free time, Hagecius taught mathematics at Charles University in Prague and provided astrological advice to the Holy Roman Emperor's court. Hagecius strongly encouraged the Holy Roman Emperor to bring Brahe to Prague from Denmark; Brahe arrived finally in 1597. Eventually, Johannes Kepler (1571–1630) began to work with Brahe, replacing Brahe in the court. Kepler completed his most important work in astronomy — the three laws of planetary motion, which eventually led Newton to prove the existence of gravity in the universe — thanks in part to data collected by Brahe. Our current understanding of the universe was advanced by the motives of a physician, mathematician, astronomer, herbalist, and translator in bringing together in one place the best scientists of his time.

By the way, Hajecius is also significant for writing one of the earliest books on beer-making in 1585. No wonder an asteroid and lunar crater are named after Hajecius!

Paracelsus, a.k.a. Philippus Aureolus Theophrastus Bombastus von Hohenheim, was an unexpected revolutionary in sixteenth century Europe; entire books have been dedicated to understanding Paracelsus. To some, Paracelsus is the founder of modern biochemistry; others consider him a dangerous self-promoter and book burner, after a stunt at the University of Basel that certainly made him quite unpopular with some academics and the public (although some students found it quite charming).

Paracelsus argued against notions about balancing one's humors (ideas that date back to Hippocrates and Galen), emphasizing instead a balance of one's chemistry against the dire effects of external factors, which is a very modern idea. It was the essence of a specific plant — its basic chemistry — that could restore health. Hence, Paracelsus recommended reducing plants to their basic essences. It is not surprising that this work ends with De ratione distillandi aquas ex omnibus plantis, a very graphic description of the kinds of stills and related devices needed to concoct essences from medicinally valuable plants.

Overall, Herbarz is a symbol of the intellectual richness of the Renaissance. Bringing together art and science in one volume, it represents new directions for medicine, chemistry, and botany, with fundamental ideas breaking away from classical and medieval paradigms. We owe much to Hagecius, Mattioli, and Paracelsus; I thank them every time I open Herbarz.