Redwoods, photography, and the birth of conservation 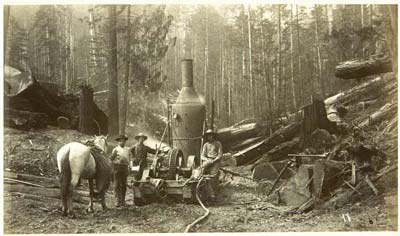 On March 15, 1897, the Massachusetts Horticultural Society acquired for a mere $1.50 a little promotional book from a now-extinct bookstore at 56 Cornhill in Boston. Little did they know how invaluable their acquisition would become more than a century later.

Entitled Redwood and Lumbering in California Forests, this book was an experiment in advertising and in the use of a new illustrative technology in books: photography. Published in San Francisco in December 1884, the work was the idea of Edgar Cherry, who wanted to promote the exploitation of the great redwoods of northern California.

The copy in the Lenhardt Library, acquired in 2002 from the Society, is special for a number of reasons. On the blank page just before the title page, boldly in ink, is this inscription:

Cherry thought this book was necessary as a vehicle to explain the enormous profitability of the California redwoods. Redwood lumber was a relatively new commodity on the market in the 1880s. Investors were needed to help fund the harvesting of the great forests along the foothills of the Sierra Nevada. Customers had to be convinced that there was an abundance of this wood on hand, available for immediate shipment anywhere in world.

In a remarkable study published by the Book Club of California in 1983 (also in the collection of the Lenhardt Library), Peter Palmquist examined all extant copies of this work in order to understand their differences and similarities, as a relic of the application of photography to book production. Each copy of this work contains 24 albumen photographs measuring 5 by 8 inches, all taken in 1883 under difficult conditions. Albumen prints were developed in 1850, using albumen (found in egg whites) to bind photographic chemicals to paper. These sorts of prints were most common in the last half of the nineteenth century.

Each plate depicts different scenes from the redwood forests, starting with a number of images of the forest at a distance, then entering into the forest proper, where lumberjacks were hard at work removing magnificent trees hundreds of years old. No copy of this work includes the same plates; each is different. Perhaps Cherry customized each copy for each customer; perhaps he used the plates that were on hand and ready to be organized in the letterpress. Very likely no more than 500 copies of this work were created. The work was expensive. Palmquist suggests that its initial cost could have been as high as $15 or $20, well beyond the reach of many.

The images in this book are shocking, to say the least. No one — not even the most hard-grained logger — could have failed to be impressed by those natural cathedrals of trees, all on the cusp of destruction. Cherry, in the text interspersed among the photos, notes that

almost the first thought passing in one’s mind, as he enters a virgin forest of redwoods, is one of pity that such a wonderful creation of nature should be subject to the greed of man for gold. The same feelings of awe pervade one’s being upon his first introduction to this apparently exhaustless army of giants … .

After this poetry, Cherry falls into a prosaic explanation of your average logging camp, including all of the various personalities from cook to bull-puncher (those, according to Cherry, with “an inborn genius to command the attention and obedience of the unwieldy draft ox”) to railroad engineer. At the very end of his comments, after describing the shipments of redwood lumber to England, Australia (which purchased some 1.5 million feet of redwood lumber in 1883 alone), and elsewhere, Cherry concludes that

within a generation to come the question will be asked: “How long will the Redwoods last? A few years at most. But in that brief time men will build their castles and their thrones of power upon the mighty race of giants, with the one regret that there no more to conquer.”

Albert Kellogg (1813 – 87), a physician and botanist, wrote an essay at the end of book on redwoods. Kellogg, a founder of the California Academy of Sciences, was much less pecuniary than Cherry, and less concerned with the business of harvesting redwood. He was absolutely fascinated by the beauty of these magnificent expressions of nature, overwhelming his scientific eye. In the essay, Kellogg begs for some sort of policy to protect these forests, in contrast to Cherry’s urge for accelerated exploitation. He argues that these forests have enormous value as filters of air and water, and perhaps other unknown (at the time) “beneficial effects alone to warrant the utmost concern.”

Kellogg’s remarks were the start of a campaign that built momentum slowly over the decades. John Muir wrote in 1920,

Any fool can destroy trees. They cannot defend themselves or run away. And few destroyers of trees ever plant any; nor can planting avail much toward restoring our grand aboriginal giants. It took more than three thousand years to make some of the oldest of the Sequoias, trees that are still standing in perfect strength and beauty, waving and singing in the mighty forests of the Sierra.

By the middle of the twentieth century, only a few percent of the original old-growth redwood forests remained. But thanks to the efforts of many, the grim photographs in Cherry’s book are a reminder of an embarrassing past. The redwood forests were not lost in a generation or two, as Cherry has boasted, but survive and flourish. This book provides a unique record of “vandals,” as Kellogg called them, and their attempts to conquer nature by brute force.