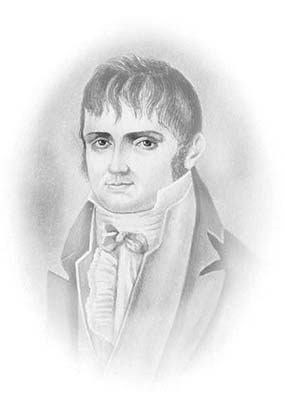 What's a species? To Constantine Samuel Rafinesque (1783–1840), almost anything became a separate species, even different forms of lightning. The ultimate splitter, Rafinesque named thousands of species, of which only a few have survived taxonomic scrutiny to this day.

The Lenhardt Library has quite a spectacular collection of Rafinesque's botanical works, including his scientific journal entitled the Atlantic journal, and friend of knowledge, published between 1832 and 1833. Many of his publications, such as the Atlantic journal and others with intriguing titles like Alsographia Americana (1838) and Autikon botanikon (1840), were self-published by Rafinesque in Philadelphia. The ultimate vanity printer, much of Rafinesque's taxonomic work was ignored in his lifetime, and discarded after his death. Why?

Rafinesque was the first great taxonomist in the United States, exploring much of the Ohio River valley and the eastern seaboard for animals, plants, and fossils. A polymath, his broad interests in natural history and intellectual enthusiasm make Rafinesque's work nearly unclassifiable. Rafinesque would certainly have identified himself as a separate species of the genus Homo, if given the chance, certainly different from examples of the species H. sapiens.

As a species splitter, he placed great importance on subtle physical features and other traits to distinguish different species. As a youngster collecting fossils, I saw species as being impermutable, solid, fixed, like the limestone matrix in which I found my specimens. Classic, traditional paleontological textbooks, like Henry Woods's (1868–1952) Palaentology, invertebrate (published in countless editions by Cambridge University Press starting in 1893), featured unambiguous definitions of species. In the 1909 fourth edition of Woods's text, a species "includes a group of individuals which appear to have descended from the same ancestors and can give rise to offspring which are fertile among themselves; such individuals usually differ from one another to only about the same degree that offspring of the same parents may differ" (p. 13, Woods, 1909). Jump a number of decades to the eighth edition of Woods, published in 1950, and you will find the same definition of a species (on p. 14). I could wrap my head around this definition as a child paleontologist. It was only later that I discovered that the notion of species was more complicated.

In 1954, the Systematics Association held a symposium on the species concept in paleontology. I discovered the papers for this meeting in the course of research on science fair project in high school on the evolution of some fossil oysters in the genus Exogyra, which lived some 70 million years ago. I had a difficult time understanding the changes in three species over a period of a few million years, and turned to statistical analysis as one way of resolving my problems. I was completely in sympathy with a statement by P.C. Sylvester-Bradley (1913–1978) from the symposium, in which he wrote that "the fossil biospecies is often regarded by the paleontologist as a theoretical concept, incapable of demonstration."

It only much later that I discovered Hugh E. H. Paterson's (1926–) work, and understood that my confusion, and perhaps Rafinesque's, was natural, as our notions of a species evolved. Paterson noted that "species come into existence as by-products of adaptive evolution. They are not products of selection for diversity, though selection may decide whether a newly evolved species will survive for long" (from Paterson's collected writings published by Johns Hopkins University Press). Rafinesque may have justified intellectually his abundance of species as reflections of the diversity of life in America. His aesthetic appreciation for the natural history of the New World may indeed have colored his intellectual understanding of species, and so he saw new species everywhere.

Given Rafinesque's contributions to botany and zoology in early America, it is unfortunate that he is largely forgotten in this country—except on the campus of Transylvania University in Lexington, Kentucky. Rafinesque taught at Transylvania between 1819 and 1826. Students on campus celebrate Rafinesque Week at the end of each October, culminating in some fortunate and brave students spending time with Rafinesque's tomb in Old Morrison Hall. It might be more fitting to celebrate this eccentric naturalist in more scientifically appropriate way. Perhaps some day we will.