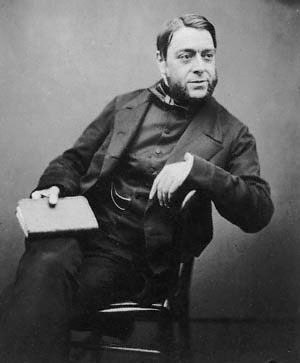 Philip Henry Gosse (1810–1888) was the perfect example of the citizen scientist of the nineteenth century. At various points in his life, he worked as a clerk, teacher, evangelist, and bird collector. However, he is best known today for his efforts to popularize science, making a weekend at the beach into a zoological expedition of the first order. He started a Victorian craze for aquaria, encouraging the use of these tanks in homes to encourage an interest in natural history especially among the young. Unfortunately, his son, Edmund, wrote a largely inaccurate portrait in Father and Son (originally published in 1907 and still in print), painting Philip Henry in not the most flattering light as parent.

The death of Philip Henry's wife, Emily, early in 1857 from breast cancer pushed Gosse into the creation of his magnum opus, an effort to reconcile science and religion. His efforts resulted in the book Omphalos: An attempt to untie the geological knot; this book was a huge failure. In response, Gosse turned to his plants, especially his orchids, retreating to his home and greenhouse in Torquay, Devon.

Gosse was passionate, perhaps even a little mad, for orchids. That statement is based on much evidence that Gosse collected, grew, and otherwise occupied himself with orchids for much of the last decades of his life. In a letter to a W. Lavers, dated February 26 1877, Gosse admitted to delight in his friends being smitten by his disease or as he called it, "orchid mania." An active epistolarian, another letter from Gosse to Charles Darwin, dated April 5, 1864, reveals that Gosse imported orchids by the barrel from the Amazon ("In a barrel of Orchids that was sent me last Autumn from the Amazon …"). He indicated to Darwin that a particular barrel was largely composed of Catasetum tridentatum, and hoped to find someone to exchange Catasetum for "Vanda, or Phalænopsis." I would think collecting orchids by the barrel would be sufficient evidence for orchidmania! Though Phalænopsis was the favorite orchid of Rex Stout's fictional Nero Wolfe, Gosse certainly was more dedicated in terms of his single-minded devotion to orchids than the fictional detective Wolfe. 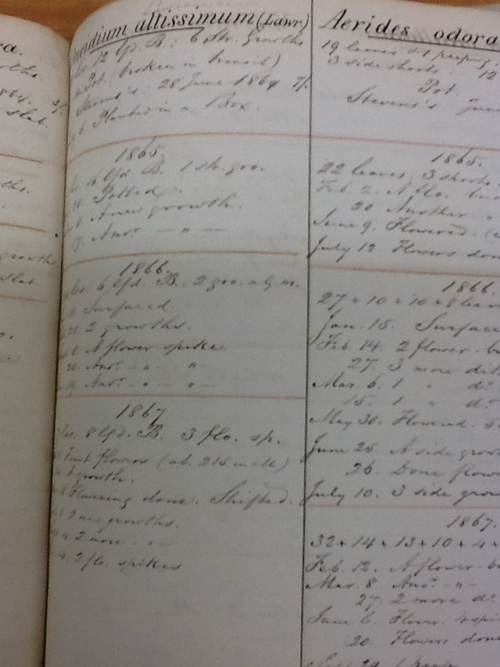 Page from Gosse's notebooks. Click image above for larger view.

The Lenhardt Library is quite fortunate to have three notebooks by Philip Henry Gosse, illustrating his fascination for orchids. The notebooks were once part of the personal library of Albert Cameron Burrage (1859-1931). Upon Burrage's death, his library became part of the Massachusetts Horticultural Society Library. In turn, a portion of that library eventually arrived at the Chicago Botanic Garden in 2002.

Burrage was well known for his own orchid mania, growing orchids to rival Gosse and Wolfe as well as collecting books and manuscripts on orchids from a variety of sources. Burrage was president of the Massachusetts Horticultural Society and the first president of the American Orchid Society. Burrage's collection of orchids was called the "greatest collection of exotic orchids in the New World." For his collection and interest in orchids, Burrage was awarded the George R. White Medal of Honor from the American Orchid Society as well as the Lindley Medal from the Royal Horticultural Society.

In the notebook labeled by Gosse as "A synopsis of cultivated orchids (supplementary to Folia Orchidac.)" Gosse sets out to update John Lindley's (1799-1865) inventory, originally published in 1855. Gosse writes in the "Preface":

"In this Synopsis I have enumerated the genera and species of cultivated Orchids, that are not included in Professor Lindley's 'Folia Orchidacea.' I have given a resume of the characters of each genus; a reference to the definition of each species; and illustrative figures; — so far only as those data are to be collected from works existing in my own library. P.H.G. October 1874"

Gosse's library must have been of considerable size, given the wealth of literature that he refers to in this work, which was never published. Gosse indeed was not interested in publishing anything about orchids or even selling some of his floral offspring to orchid merchant James Vetch. According to Gosse's biographer, Ann Thwaite, Gosse grew orchids for the "delight of myself, family and friends." He rebuffed a publisher by writing that "as a matter of taste I find the cultivation of plants more agreeable than the writing of books … ." 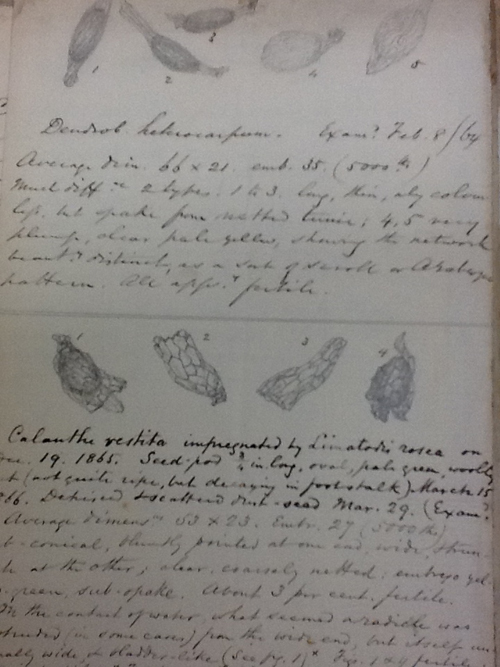 Page from Gosse's notebooks. Click image above for larger view.

Two other notebooks include many notes describing Gosse's hybridization experiments as well as his own efforts to understand the mysteries of orchid reproduction. One notebook includes a number of letters sent to Gosse in response to questions and observations on his beloved plants. Several letters from Sir Joseph Dalton Hooker (1817-1911) reveal the intensity of Gosse's research; a long letter from Hooker at Kew discusses the problems in maintaining proper temperatures in greenhouses for Indian orchids.

These notebooks illustrate the intensity of Gosse's interest in orchids. A regular correspondent with Charles Darwin, Gosse certainly influenced Darwin's thinking about orchid reproduction. Darwin complemented Gosse's observational skills, leading Darwin to recognize the significance of self-fertilization in some orchids (especially those in colder climates with less assistance from insects or other agents).

Perhaps in the near future these notebooks will find a larger audience in a reprinting both online and in print. They certainly illustrate individual dedication in understanding the natural world, as represented by orchids, but also demonstrate how scientific "networks" operated in the nineteenth century, at the speed of post.