Opuntia, Tournefort, and the rewards of persistence 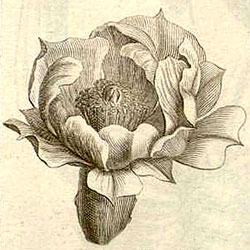 Published in 1925, T.S. Eliot's "The Hollow Men" is perhaps most famous for its ending, the most repeated stanza from a twentieth-century poem:

However, I remember an earlier stanza in the same poem: 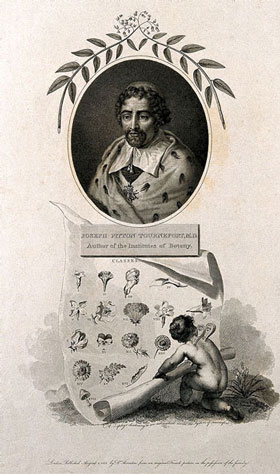 Figure 1: Joseph Pitton de Tournefort and his botanical
taxonomy in an engraving from 1802

I don't dance 'round my prickly pear (Opuntia humifusa), but I certainly protect it in its sandy patch. Thriving, expanding, flowering—this prickly pear is threatened mostly by two-legged creatures armed with trowels, who are ready to dig Opuntia up and steal it away. I haven't yet armed Opuntia with motion detectors and alarms.

Opuntia readily survives snow, cold, and every other natural threat. It is that rare cactus with an actual thick skin to manage the harshest weather. For decades, I have admired its resilience in a harsh location, where few other plants exist.

Opuntia was given its scientific name by Joseph Pitton de Tournefort (1656–1708, see Figure 1), a French botanist who eventually was in charge of the Sun King's (Louis XIV, 1638–1715) garden, Jardin du Roi (now known as Jardin des Plantes, in the fifth arrondissement in Paris). Tournefort named Opuntia (Figure 2) after the ancient city of Opus in Boeotia.

The Lenhardt Library includes in its rare book collection the most important works by Tournefort. The Library has several editions of Institutiones rei herbariae, the initial edition published between 1700 and 1703 (see Figure 3) and the third edition from 1719. Tournefort's adventures in the Middle East, at the behest of the Sun King, were recorded in a series of letters to Louis Phélypeaux (1643–1727), Compte de Pontchartrain, and collected posthumously in Relation d'un voyage du Levant: Fait par ordre du roi, published in 1718, also in the Library's collection. 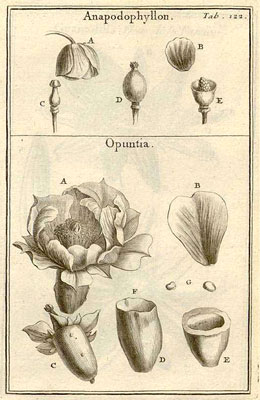 Tournefort was well aware of cacti, like Opuntia, thanks to the collecting efforts of his colleague Charles Plumier (1646–1704). Plumier's Nova plantarum Americanarum genera, published in 1703, provides descriptions of many plants from the Caribbean that were new to Europe. The Lenhardt Library possesses a magnificent copy of Nova plantarum Americanarum genera in its collection, with descriptions of a number of species of Opuntia.

Cacti were well known in Europe, given their unusual nature, thanks to Christopher Columbus (1451?–1506) and many sixteenth century Spanish explorers who brought back specimens on their travels. Cacti could endure the long and harsh journey across the Atlantic back to Europe, unlike other plants aboard wave-tossed ships. These cacti eventually found in their ways into the published works of Carolus Clusius (1526–1609), John Gerard (1564–1637), Pietro Andrea Mattioli (1501–77), and Matthias de L'Obel (1538–1616), among others. You can find these early botanical books by these Renaissance scientists in the Lenhardt Library, in order to marvel at their fascination with cacti.

Plumier and Tournefort were significant taxonomists and scientific explorers in their time. Tournefort's notion of the genus was accepted, though modified, by Linnaeus (1707–78) in Species plantarum (1753). Our notion of the genus as single Latin name, followed by Latin descriptors representing a given species, is largely due to Tournefort.

As much as I admire the stubbornness of Opuntia, I certainly delight in the persistence of Tournefort. His wealthy father Pierre decided that his son Joseph would be dedicated to the Church, so he was packed off to the Jesuits in Aix. The death of Joseph's father in 1677 essentially liberated him to drop theology and pursue botany completely. Tournefort headed to Montpellier to continue his botanical studies as well as to go into the field, with Charles Plumier, in Spain and southern France to collect specimens. All of these discoveries led Tournefort to build a sizable herbarium in Montpellier. In fact, Tournefort invented the term "herbarium" for a systematically organized collection of dried plant specimens. According to the authoritative Oxford English Dictionary, "herbarium" first appeared in print in Tournefort’s Institutiones rei herbariae. 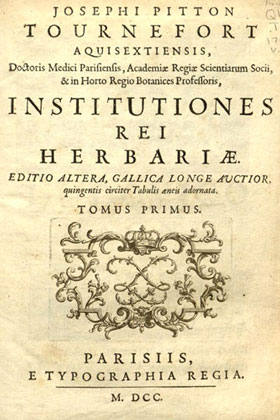 Tournefort's herbarium and passion for botany attracted the attention of Guy-Crescent Fagon (1638–1718), physician to Louis XIV in Paris. Dr. Fagon invited Tournefort to Paris, where Tournefort suitably impressed everyone in Louis's  court, including the Sun King. Louis and Fagon agreed to keep Tournefort in Paris at the Jardin du Roi. Plumier was sent off to the Caribbean to continue his botanical adventures, while Tournefort was asked to explore in the Middle East starting in April 1700. Tournefort's trip was perhaps inspired by the travels of Jean de Thévenot (1633–67) in Egypt, Syria, and India. Jean's botanical collections were never properly described as his life was cut short by an accidental gunshot.

Traveling and collecting in Greece, Turkey, Armenia, and Georgia, Tournefort amassed almost 1,400 species of plants. Tournefort became the first European scientist to scale Mt. Ararat (16,854 feet) and record changes in animals and plants with altitude. Altitudinal zonation was eventually formalized, much later, in the nineteenth century by Alexander von Humboldt (1769–1859).

Returning to Paris with thousands of specimens, Tournefort had years of taxonomic work ahead of him to properly describe his finds. Unfortunately, just a few blocks from the Jardin du Roi, Tournefort was struck by a carriage in the fifth arrondissement. After months of suffering, he died of his injuries on December 28, 1708. Rue Neuve-Sainte-Genevieve, the street in which the accident occurred, was renamed Rue Tournefort in the nineteenth century in memory of this terrible incident (Figure 4).

Tournefort's herbarium is now part of the Paris Natural History Museum, steps away from Rue Tournefort. Linnaeus admired Tournefort's notions of the genus in his Species plantarum (1753) and named the genus Tournefortia in honor of his botanical predecessor. However, Linnaeus dumped Tournefort's genus Opuntia and lumped all cacti into a single genus, Cactus, with 22 species. Philip Miller (1691–1771), a British botanist, was not at all happy with Linnaeus's classification of cacti. Miller reintroduced three pre-Linnean genera—Opuntia along with Cereus and Pereskia—all of which have survived taxonomic fashions to this day.

My prickly pear, Opuntia, is my little way of remembering the considerable accomplishments of Tournefort to make taxonomic sense in the early eighteenth century. No wonder I protect its spiny green surface from rapacious hunters!