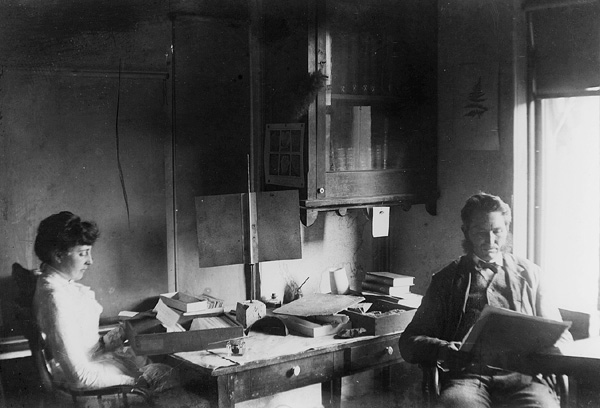 Lester Frank Ward (1841–1913) might be best remembered today as the father of sociology in America, rather than as a botanist and paleobotanist.

Born in Joliet, Illinois, he lived and worked on farms in what are now the western suburbs of Chicago. He eventually found his way to Columbian College (now George Washington University) in Washington, D.C., where he earned degrees in law and botany, an unusual combination, but perhaps an appropriate one for the nation's capital. It was in Washington that his career skyrocketed. He worked for the Treasury Department, but eventually spent many years at the U.S. Geological Survey and the Smithsonian (see image above, of Lester Frank Ward in 1886 in his office at the Smithsonian with Miss Moorehead). Miss Moorehead later married Frank H. Knowlton, a paleobotanist also at the Smithsonian and U.S. Geological Survey.

I first encountered Ward's work when I was trying to identify fossil plants from a clay pit in western Tennessee. Cooper's Pit, near the towns of Bruceton and Hollow Rock in Carroll County, yielded abundant and beautiful fossil flora from the Late Cretaceous (see Figure 1). The standard work on those fossil plants was E.W. Berry's (1875–1945) Flora of the Ripley Formation, and I tracked down a copy in the Field Museum Library. That research led me to the prolific paleobotanist Lester Frank Ward, who was active at the end of the nineteenth century and beginning of the twentieth century. I eventually acquired a copy of Ward's Status of the Mesozoic Floras of the United States (Washington, D.C.: U.S. Geological Survey, 1905). With it, I was better able to understand the connections of 70-million-year-old fossils from Tennessee to related floras in other parts of the United States and Europe. Ward explained these connections in greater detail for a slightly older flora in his Some Analogies of the Lower Cretaceous of Europe and America, published in 1896. 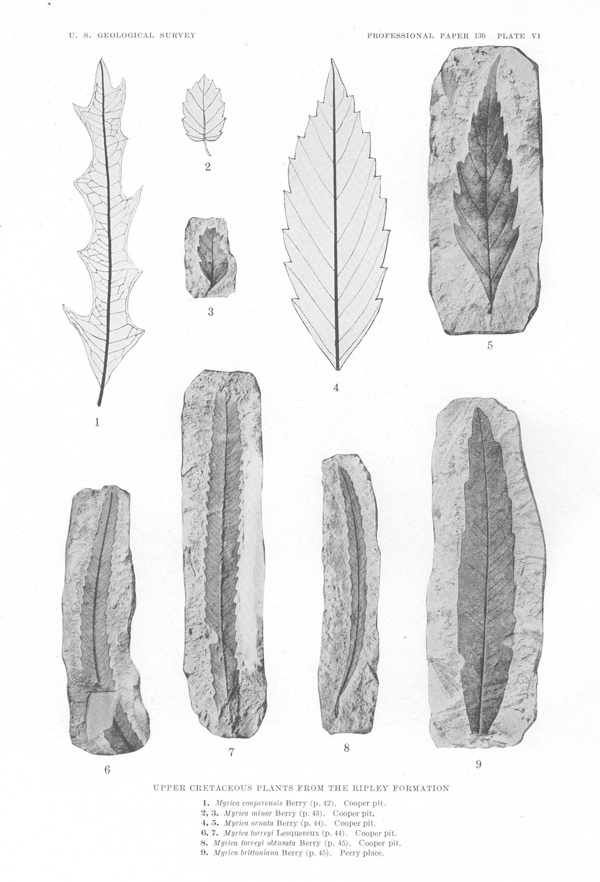 Ward was a careful student of modern plants, in 1881 publishing his Guide to the Flora of Washington and Vicinity, a copy of which can be found in the Rare Book Collection of the Lenhardt Library at the Chicago Botanic Garden. The Guide is comprehensive. Ward looked for plants first noted in Washington more than 50 years earlier in John Brereton's A Prodromus of the Flora Columbiana (Washington, D.C., 1831). To his surprise, he could not find 146 distinct plants recorded five decades earlier. What happened?

Ward devised four explanations for those missing plants in the Washington area. First, they could have been misidentified. Second, plants were included in Prodromus that were truly not native to the area. Third, collectors could have found plants outside the immediate Washington area and in error noted that they were part of the local flora. Finally, the missing plants were truly missing—as in extinct (see Figure 2).

Ward calculated that the 1830 flora of some 919 plants was quite incomplete, given a potential lack of well-trained and knowledgeable plant collectors (although one could argue that this is a specious argument since the Prodromus was based on five years of collecting by members of the Botanic Club of Washington, not exactly the most ignorant group of observers). According to his estimates, there may have been up to 1,500 different plants growing in the Washington area in 1830.

Ward thought that perhaps the shrinkage of the local flora was largely a result of the growth of Washington. In 1830, Washington's population was 39,834; by 1880, it had grown to 177,638. With this increase in humans and their infrastructure, habitats disappeared. As Ward notes in the Guide:

"There were doubtless large areas of primeval forest then within our limits which are now under cultivation, and a much greater variety of soil and woodland was then open to the researches of the botanist. As a consequence, we ought to expect that it would sustain a much richer flora." 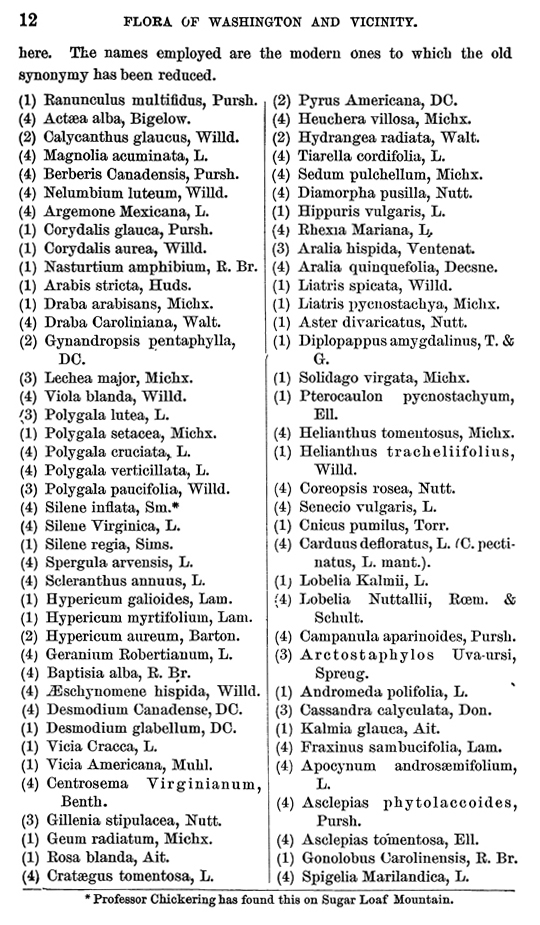 Ward knew that botanists have a very different perspective on their surroundings, hinting at the effects of humans on the natural world:

"In many ways the botanist looks at the world from a point of view precisely the reverse of that of other people. Rich fields of corn are to him waste lands; cities are his abhorrence, and great open areas under high cultivation he calls 'poor country'; while on the other hand the impenetrable forest delights his gaze, the rocky cliff charms him, thin-soiled barrens, boggy fens, and unreclaimable swamps and morasses are for him the finest land in a State. He takes no delight in the 'march of civilization', the ax and plow are to him symbols of barbarism, and the reclaiming of waste lands and opening up of his favorite haunts to cultivation he instinctively denounces as acts of vandalism."

Hence, Ward was one of the first American scientists to recognize the effects of urbanization on habitat reduction and extinction among plants. The full impact of urbanization has only been appreciated recently. For example, Brian Czech and his colleagues noted in a paper in 2000 that:

"Urbanization endangers species by replacing habitat directly and by depleting resources needed to support urban economies. ...Next to agriculture, urbanization is the most ubiquitous threat, endangering 275 species in 31 states and Puerto Rico."

Imagine if Ward's findings for Washington were applied to other urban areas in the nineteenth century. There were distinct floras organized and published for several metropolitan regions in the United States, such as Boston and Philadelphia. For example, William P.C. Barton (1786–1856) published his Florae Philadelphicae Prodromus in 1815, describing 450 genera growing within 10 miles of the center of Philadelphia. If another survey had been made in Philadelphia 50 years after the end of the Civil War, how many of those plants would have still existed? This information would have provided a valuable historical dimension to current research on the impact of humans. Unfortunately, Ward's conclusions about urbanization and plant extinction were lost in the literature for decades. His Guide to the Flora of Washington and Vicinity was treated just as a local floral handbook, not as an introduction to the myriad effects of urbanization and habitat loss.

Other nineteenth-century scientists were aware of human effects on the environment. An Italian Catholic priest and geologist, Antonio Stoppani (1824–91), described a number of humanoid consequences on the planet in 1873, identifying this current epoch as the "Anthropozoic Era." Stoppani's ideas were dismissed and ridiculed until 2002 when the Dutch chemist and Nobel laureate Paul J. Crutzen reintroduced them in a paper in the prestigious journal Nature.

There is no direct evidence that Ward and Stoppani were aware of their research and conclusions. We can only speculate about the kind of investigations that might have been possible had Ward's conclusions not been lost in obscurity and Stoppani's observations not tossed aside. Indeed, Ward might be remembered today not only as the father of sociology in the United States for his extensive writings on the subject in the last 20 years of the nineteenth century, but also as a visionary botanist recognizing the handiwork of humans on the biosphere. Ward might agree with American novelist Chuck Palahniuk, who wrote in his novel Invisible Monsters (1999) that "We'll be remembered more for what we destroy than what we create."