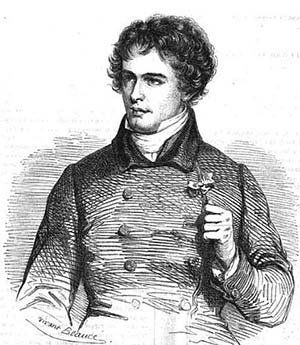 Victor Jacquemont (1801–32), was the most charismatic, tragic, and energetic natural historian of his generation. His career as a scientist was cut off sadly on his return home from an ambitious expedition in India—including Kashmir and the Himalayas—dying in Bombay less than four months after his 31st birthday.

The Lenhardt Library of the Chicago Botanic Garden includes in its collection Jacquemont's magnum opus, Voyage dans l'Inde pendant les années 1828 à 1832, published posthumously between 1841 and 1844 in Paris in 80 parts and collected into six folio volumes (four text volumes and two volumes of illustrations). Additionally, the Library has several editions of Jacquemont's correspondence to his parents, colleagues, and many friends, in French as well as translated into English. With this wealth of information, we can begin to understand the impact of Jacquemont during his life and wonder what he might have done, had he lived even for a few more years.

Victor Jacquemont was a star in the intellectual circles of Paris in the 1820s. His scientific, social, and political contacts from this period allowed him to travel to the United States, Haiti, and eventually Asia. It must have been quite a sensation for Jacquemont to be part of the important salon of critic and painter Étienne-Jean Delécluze (1781–1863) by the age of 21! It is not surprising that Jacquemont "botanized" with Adolphe-Théodore Brongniart (1801–76), the father of paleobotany, working at the Muséum national d'Histoire naturelle and Adrien-Henri de Jussieu (1797–1853), son of botanist Antoine Laurent de Jussieu (1748–1836) at the Jardin des Plantes. Such a scientific pedigree meant that Jacquemont could pursue his interests in botany and geology anywhere in France, on the continent, and literally in the world (which he did).

His connections in Delécluze's salon led him to be a close friend and correspondent with Alexandre Dumas (1802–70) best known today for his historical novels such as The Count of Monte Cristo and The Three Musketeers; Prosper Mérimée (1803–70), author of the novella Carmen, which Georges Bizet (1838–75) transformed into one of most popular operas of all time; and Marie-Henri Beyle, better known under his nom de plume, Stendhal. Through these literary and artistic connections, Jacquemont met the singer Adélaide Schïasetti and fell in love with her. Schïasetti did not reciprocate, and Jacquemont was miserable. 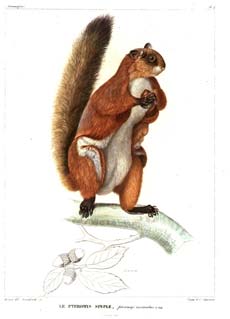 Jacquemont was known at least to some in his circle to dislike Napoleon Bonaparte (1769–1821). Jacquemont's father had been imprisoned by Napoleon in 1808, and some of Jacquemont's earliest memories of his father were based on visits to prison. Jacquemont certainly disagreed with Stendhal about Napoleon, and eventually decided to leave France for America, to explore, forget Schïasetti, and escape from rampant Bonapartism. Thanks to Jacquemont's friendship with Gilbert du Motier, marquis de Lafayette (1757–1834), George Washington's talented major general, Jacquemont was able to travel to the United States, arriving in December 1826.

Unfortunately for Jacquemont, his time in New York was short-lived, thanks to his distaste for Napoleon. A post-dinner conversation with General François Antoine "Charles" Lallemand (1774–1839), who had served under Napoleon and later would unsuccessfully attempt to create a Texan colony for Napoleonic veterans, led to an argument, and Jacquemont challenged Lallemond to a duel. The laws of New York quite clearly declared dueling illegal, so Jacquemont told Lallemond that he would travel to Haiti, where they could settle the score properly. Lallemond eventually apologized; Jacquemont departed for Haiti early in 1827.

Pierre Louis Antoine Cordier (1777–1861) of the Muséum national d'histoire naturelle provided yet another escape for Jacquemont, an invitation to his fateful trip to India. The scientific expedition would depart in August 1828, so Jacquemont returned to the United States from Haiti and collected specimens for the Paris museum along the East coast and into Canada. Letters from Jacquemont's time in America in 1827 reveal a great deal of insight into the new country and its citizens, clearly anticipating similar revelations made by Alexis-Charles-Henri Clérel de Tocqueville (1805–59) in his classic Democracy in America (1835). Jacquemont found the democratic principles of the United States invigorating, and was particularly impressed by the lack of financial and other class structures that he knew in France. He was appalled by slavery and predicted that it eventually would lead to a civil war.

Jacquemont's voyage by ship to India lasted nine months, and he arrived in Calcutta in May 1829. From Calcutta, Jacquemont and his entourage (including six servants) travelled to Delhi, arriving in March 1830. From Delhi, Jacquemont moved north to the western Himalayas, collecting plants and animals, taking detailed notes, and sending a steady stream of letters to family and friends.

Certainly the pace of Jacquemont's expedition was physically and mentally demanding. It took a toll on his health, and over time weakened him completely. Here is an excerpt from one of his letters, written on March 31, 1832:

"I write you a few words, my dear friend, before the arrival of my basin of milk and its accompaniment of chepatties [corn bread cakes]; and on the conclusion of my breakfast, I shall sit down to my occupations for the day. In the afternoon I shall certainly not be in so good humour, because then there will be ninety or a hundred degrees of heat in my tent, and a poor devil condemned to be baked can scarcely feel any disposition to be merry. The summer has set in these six or seven days; its arrival is something like that of a cannon-ball, which gives no notice of its approach, and I am caught. ... The cold and hot air-baths which I was thus obliged to take, whether I would or not, produced a bad cold on my chest; I completely lost my voice for several days. I wanted to cover my throat and chest with leeches on my arrival at Neemuch, where I stopped and remained three days at the house of an old gentleman of my acquaintance, chief physician to the army in these provinces; but the good man had his prejudices against leeches, and although I had not the slightest confidence in his medical talents, I allowed him to do as he pleased, and contented myself with fasting, and drinking expectorating ptisans [barley water]. Five days since I resumed my journey, and am almost cured ...."

His family and large group of influential friends organized the production of his scientific work, which we know as Voyage dans l'Inde, involving a team of artists and editors to collect his notes and drawings for publication. His letters, too, were compiled as another memento, providing fascinating insight into this scientist who could have had a great and even more influential career in natural history. Sadly we will never know.