My mossy friends: On the importance of bryophytes 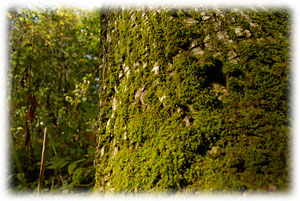 "When I detect a beauty in any of the recesses of nature, I am reminded, by the serene and retired spirit in which it requires to be contemplated, of the inexpressible privacy of a life — how silent and unambitious it is. The beauty there is in mosses must be considered from the holiest, quietest nook." — Henry David Thoreau (1817–62).

Mosses carpet my hillside backyard, a green expanse covering soil and wood. A fat robin, with nervous energy, hunts for bugs in rotten timbers, unfolding green mats with his beak. He is well aware that small insects hide in that green layer. Frances Elizabeth Tripp (1832–90) noted in 1868 in her colorfully written Victorian tome entitled British Mosses, Their Homes, Aspects, Structure, and Uses:

“We next find that mosses are useful to the insect tribe, countless number of which find homes among their branches, and roam about in their shades as in mighty forests, and look with their thousand eyes upon the wonders of their gauzy leaves, and sun their wings of purple and of gold, and burnish their shining armour upon the polished columns of their urns.” (p. 31) 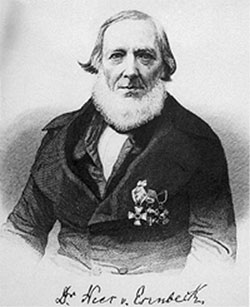 Who first recognized mosses and other bryophytes in Illinois? According to Bill McKnight in his Bryophytes of Illinois (Urbana: Illinois Natural History Survey, 1987), it was German botanist Christian Gottfried Nees von Esenbeck (Figure 1). Christian Gottfried was a prolific botanist, describing thousands of new species. As a professor first at the University of Erlangen-Nuremberg, then at the University of Bonn, and finally at the University of Breslau, he influenced hundreds of students. As president for four decades of one of the most important scientific societies in the world, Deutsche Akademie der Naturforscher Leopoldina, he was in contact with the most important natural historians in the nineteenth century. The Lenhardt Library of the Chicago Botanic Garden has several important works by Herr Professor in its collection, including Naturgeschichte der europäischen Lebermoose: mit besonderer Beziehung auf Schlesien und die Oertlichkeiten des Riesengebirgs (1833–38). Sadly, the Library does not own a copy of the scarce 28-page pamphlet, Verzeichniss der Pflanzen welche der Prinz Maximilian von Wied von seiner Reise am obern Missouri mit zurückbrachte, published in 1834, describing midwestern bryophytes for the first time. 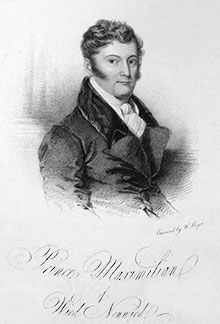 Professor Nees von Esenbeck never traveled to the United States. How did he acquire his specimens? One of the most important, yet largely forgotten, scientific expeditions to young America was led by Prince Maximilian of Wied-Neuwied (1782–1867) between 1832 and 1834. Prince Max (see Figure 2), as he was known among his colleagues, was an experienced explorer. His adventures in the Brazilian jungles in 1815–17 were remarkable for the sheer quantity of information retrieved on the fauna and flora as well as the Botocudos or Aimoré, indigenous hunter-gatherers. Maximilian was interested in comparing his findings on the Aimoré with objective details on North American natives on the Great Plains. As in Brazil, Prince Max was planning to gather as many examples of plants and animals in North America for detailed scientific work by his colleagues, such as Nees von Esenbeck.

Prince Max arrived in Boston on July 4, 1832, after a tumultuous Atlantic crossing, with artist Karl Bodmer (1809–93) and David Dreidoppel (1814–?), Maximilian’s assistant and collector. Stopping briefly in New York and Pennsylvania, the trio arrived in New Harmony, Indiana, in October 1832. Illnesses confined Maximilian and Dreidoppel for months to New Harmony; Bodmer took advantage of his good health for a quick trip early in 1833 to New Orleans.

Based on Maximilian’s notes, botanical collections were made along tributaries of the Wabash River, the Fox and Black Rivers, near New Harmony early in 1833 (Figure 3). Bill McKnight, in his paper “Notes on the Bryophytes of Indiana,” published in 1986, doubts that Prince Max’s bryophytes were from the Illinois side of the Wabash in spite of repeated published interpretations of Nees von Esenbeck’s original descriptions, a result of geographic and linguistic confusion by generations of botanists.

By spring 1833, Prince Max, Bodmer, and Dreidoppel headed west to St. Louis and then up the Missouri River to encounter American natural history and natives. Many of their collections of flora and fauna were destroyed by bad luck, ignorance, and fire on their return east, but their records of the Mandans in the Dakotas along the Missouri are nearly priceless. Prince Max summarized his findings in a spectacular monograph entitled Reise in das innere Nord-America in den Jahren 1832 bis 1834 (Figure 4). 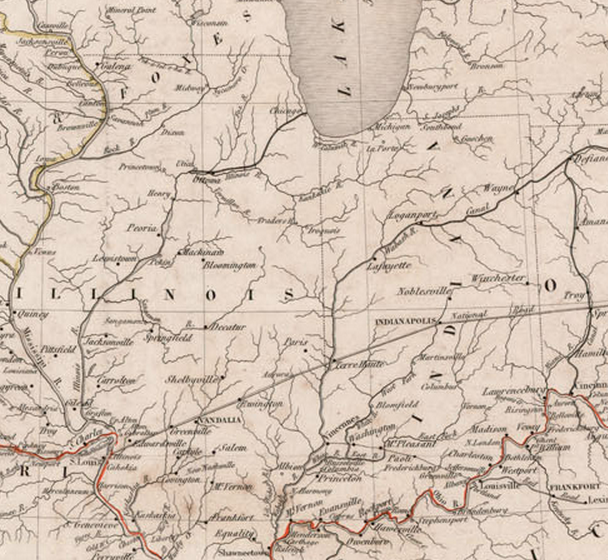 Figure 4: A close-up of the Midwest from the map in Maximilian's Reise (1841)

So who really first described Illinois bryophytes? Frederick Brendel (1820–1912) of Peoria, Illinois. was the first to mention bryophytes in Illinois, in a brief note in the third volume of the Transactions of the Illinois State Agricultural Society in 1859 (this extinct journal is part of the collection of the Lenhardt Library). Dr. Brendel was educated at the University of Erlangen, and migrated to Peoria from Germany in 1850. He was an enthusiastic botanist and meteorologist, collecting five decades of records on temperature and precipitation in Peoria. George S. Vasey (1822–93) provided in the same volume of the Transactions in 1859 greater detail in his paper "Mosses of Illinois" (Figure 5), albeit focused on those occurring in McHenry County. Vasey left Great Britain in 1823 and eventually settled in Ringwood, Illinois. A frequent contributor to Prairie Farmer, he caught the attention of John Wesley Powell (1834–1902). Powell included Vasey on his 1868 expedition to the Colorado River, where Vasey collected hundreds of plant specimens. Vasey left Illinois and eventually became the chief botanist for the U.S. Department of Agriculture.

Bryophytes—which include mosses (Bryophyta), hornworts (Anthocerotophyta), and liverworts (Marchantiophyta)—are considered to be living analogues to the first plants to appear on land some 460 million years ago. These early plants had enormous influence on the planet. Over the next 60 million years, to the end of the Silurian, these earliest plants pumped prodigious quantities of oxygen into the atmosphere. Levels of atmospheric oxygen rose 15 percent in those 60 million years, according to Peter Ward in his book Out of Thin Air (2008). These exuberant changes to the Silurian sky made it eventually possible for animals to venture onto to land. 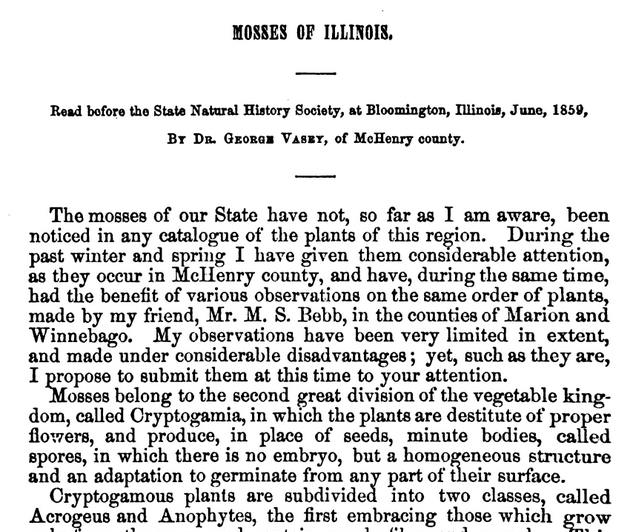 Figure 5: A page from Mosses of Illinois, by George S. Vasey

When I think of these early plants, I remember my first fossil discovery. I was a very young collector of ancient sedimentary relics. I was excited about what I imagined was a fine example of a Silurian plant (although its remains in limestone should have made me slightly suspicious). Its branching form looked like illustrations of Cooksonia, an early extinct plant preserved in rocks found in Great Britain. I hurriedly sent off my specimen and a detailed, hand-written explanation of my discovery to the nearest paleontologist. He must have had a hearty chuckle at my impoverished attempt at scientific renown. Fortunately, he returned my fossil asset with a brief but informative letter, explaining that my discovery was a branching bryozoan, a colonial marine animal that lived in the sheltered waters of a large Silurian reef, not an ancient plant.

We have much to thank mosses for—oxygen in atmosphere (while also removing excess carbon dioxide), a refuge for small animals, and a quiet beauty, as recognized by Thoreau and others. That green layer outside my kitchen window, bright in the sunlight, represents hundreds of million years of evolution to create a beautiful restorative engine for the planet, far more efficient than any geo-engineered wonder.