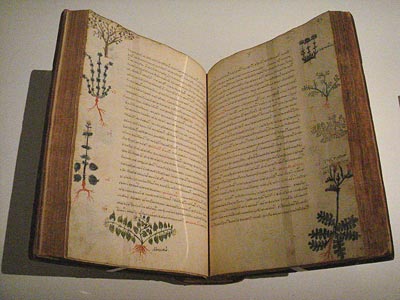 The most ponderous work in the rare book collection?

Without a doubt, it is Dioscorides's Codex Vindobonenis, released in 1906 by the Leiden publisher Albertus Willem Sijthoff.

In two large (the bibliophilic term "elephant folio" certainly applies here!) volumes, this magnificent publication represents the first full-sized photographic reproduction of the most famous Byzantine manuscript of all time. Every time that I fetch these quite heavy books, with their covers in wood and leather, I regret not wearing a weight-lifting belt. Yet this work is far from ponderous intellectually. Indeed, it is one of my most cherished books in the collection. Let me explain why.

Codex Vindobonenis resides in Vienna at the Österreichische Nationalbibliothek, its home since 1569. The Codex is unique, since it is the most famous illuminated, and oldest, version of medical advice on plants by Dioscorides (circa 40 – 90 A.D.). Dioscorides (some of my students are confused over the pronunciation of this Greek physician and simply refer to him as "Disco") flourished in the first century A.D., working as the equivalent of a surgeon general for the Roman armies. He was well acquainted with a variety of plants in the Mediterranean region as well as throughout the Roman empire of Nero (37 – 68 A.D., emperor 54 – 68 A.D.). Hence, Dioscorides's advice on the medical benefits of plants was considered quite valuable, and indeed was followed to some degree into the seventeenth century in Europe. Imagine creating a reference book used for almost two millennia! This book was one of the few nonreligious works to survive in Europe from Roman times into the Middle Ages and Renaissance. The manuscript known as Codex Vindobonenis or the Codex Julianae Aniciae certainly helped this work survive in Europe for centuries.

Of special note is the dedication miniature portrait of patroness Anicia Julia on folio 6 verso. 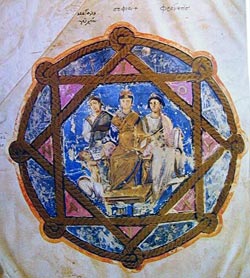 Anicia Julia is flanked by personifications of Magnanimity and Prudence. At her feet, another personification, labeled "Gratitude of the Arts", kneels. Click image above for larger view.

On the reproduction of the sixth leaf of first volume of the original Codex you can find one reason why this work survived. In the center of this illustration is the patroness of this manuscript, Anicia Juliana (462 – 527). Daughter of Roman Emperor Olybrius in Constantinople, Juliana was one of the first women acting on her own to support the arts. Three churches were commissioned by her in Constantinople. This lavish illustrated manuscript was given to her in gratitude for her support of these architectural projects.

How did the manuscript find its way to Vienna? Ogier Ghiselin de Busbecq (1522 – 92), a diplomat for the Holy Roman Emperor in Constantinople (1554 – 62) and bibliophile, discovered the manuscript and convinced Ferdinand I (1503 – 64) to acquire it. We owe the survival of the Codex to de Busbecq, but we actually are indebted to him for much more. It was de Busbecq who brought tulip bulbs from Constantinople to his friend and colleague Carolus Clusius (1526 – 1609), physician and gardener to Ferdinand I. Clusius in turn took those bulbs to Leiden in 1593, where he established a garden at the university. From that garden, those tulips eventually took over all of the Netherlands in a mania. More on that phenomenon in a future column.

A close examination of the leaves of this manuscript demonstrates that the work found many readers, as annotations are in Greek, Latin, and Arabic. Certainly, Dioscorides's advice as preserved in the Codex was used over the centuries in Constantinople, and commented upon by physicians and others. These marginalia provide insights into the utility of this work over time.

It is fascinating that Albertus Willem Sijthoff (1829 – 1913) decided to take advantage of a relatively new publishing technology to make the Codex more widely available to scholars, students, and the public. Sijthoff started his business in Leiden in 1851 and quickly developed a reputation for innovation and scholarship. In a pamphlet published in 1908, he promoted his photographic reproductions of important manuscripts such as the Codex.

Sijthoff's interest was stimulated by Otto Hartwig (1830 – 1903), director of the university library of Halle in Germany. Hartwig was well acquainted with the rich manuscript collections of European libraries, knowing the frustration of scholars and students in colleges and universities in America with their inaccessibility. In July 1893, Hartwig visited Chicago to attend a universal congress of librarians, coordinated with the Columbian Exposition on the south side. At that meeting, Hartwig proposed a joint venture of American and European libraries to make available, with the use of new printing technologies that utilized photographic images, the great manuscripts housed in isolation. Hartwig essentially was proposing a kind of mass reproduction process that we see today with Google Books or the Internet Archive. Hartwig's proposal was referred to the American Library Association in 1894. American librarians were lukewarm to say the least, in part because of the dire economic situation of the country in the 1890s. Thanks to the efforts of the director of the library at the University of Leiden, Willem Nicolaas du Rieu, the Dutch government eventually promised support for the project, which led to Sijthoff's involvement as the publisher of the first efforts to make a dozen manuscripts more widely available with these new technologies. 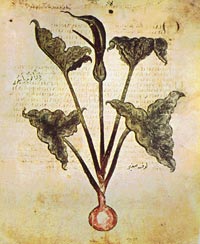 Sijthoff's magnificent and massive two volumes were not simply a full-scale and detailed photographic reproduction of the Codex in Vienna. As a scholarly imprint, the Codex fulfilled the need Sijthoff saw for a historical context. Hence, the images are preceded by a detailed analysis of the Codex in Latin, by historian Anton Ritter von Premerstein (1869 – 1935) on the history of the manuscript; Carl Wessely (1860 – 1931) on the paleography of the work; and Joseph de Karabacek on the botanical illustrations.

Hartwig's dream more than a century ago in Chicago was well executed by Sijthoff's team of technologists and scholars. Thanks to their efforts, we can examine Juliana's Byzantine gift, compare it to printed versions of Dioscorides, one of the most popular botanical books in the Renaissance. With the collections of the Lenhardt Library, we can treat the permutations of Roman medical wisdom over time to the present day. In total, these books at the Garden provide a window spanning millennia, giving us intellectual opportunities that would only be possible by visiting many libraries across Europe and America. No wonder my students exclaim "Disco!"