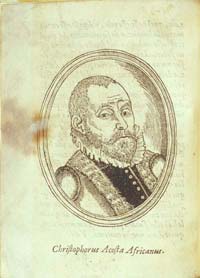 That old saw, "you can't tell a book by its cover" certainly applies to Cristóbal Acosta's (1515?–94) Aromatum & Medicamentorum in Orientali India Nascentium Liber and its unusual binding. Printed in 1582 by Christopher Plantin (1520–89) in Antwerp, this important book features a portion of a musical manuscript as its cover. Ever since the Chicago Botanic Garden's Lenhardt Library acquired this work, I have been fascinated and stymied in understanding why a vellum cover from a manuscript was used for this particular book. One of my students in the Graduate School of Library and Information Sciences at Dominican University, Bryan Deziel, took some important first steps in understanding the context of this binding with a report in my History of the Printed Book class. I'd like to summarize some of Bryan's findings, and explore some of the questions that his work in turn stimulates.

We are all accustomed to books having paper or cloth bindings, created by publishers to protect the book block and to attract our attention. Bindings created by publishers only became common in the nineteenth century with the industrialization of all aspects of printing and bookmaking. In the hand-press period from the middle of the fifteenth to the end of the eighteenth centuries, books were not bound with standardized covers by their publishers, the so-called "publisher's bindings." Before 1800, when you bought a book directly from a publisher, you acquired a collection of printed gatherings, sewn together with covers made of temporary material, like scrap paper and cardboard. You then took your book to a binder to have it fitted with an appropriate leather binding, according to your taste and budget.

If you were wealthy—or simply a bibliophile in a decorative mood—there were many options for covering a book, with plenty of choices of materials, tooling, and decoration. If your budget was limited, then you might ask your bookbinder to take some scrap material to create a binding. Often, manuscripts of vellum, medieval discards so to speak, were guillotined and recycled into covers for printed books. Certainly this choice was made with the Garden's copy of Acosta's Aromatum.

Bryan's background in musicology certainly helped in deciphering the mystery of Acosta's binding. He identified the cover as a fragment of religious music used in specific Catholic services. His careful transcription of the text written on the fragment by some unknown scribe reads:

Translated from the Latin, this text is from Luke:

Bryan then searched online to see if he could find a larger context for this muscial fragment. Thanks to the digitization efforts of many libraries, organizations, and individuals, a number of scarce works appear on the Internet in digital form. Bryan found a digital copy online of a match to the fragment in the collections of the University Library of Graz, Austria. The cover was extracted from a larger Benedictine antiphony created in the fourteenth or fifteenth century, entitled Antiphonarium Benedictinum Pars Aestiva (compare Figure 1, the text and musical notation from the Graz copy for "Obtulerunt Discipuli Domino" to Figure 2, the text and notation for the same text and notation found on the cover of Acosta's Aromatum in the Lenhardt Library).

Figure 2, from the Acosta text

Why was a religious work used to bind a botanical book? In class, we had a lively discussion about the meaning and symbolism of this recycling. Was it just a random act? Probably not, concludes Bryan in his paper. It is all about context.

First of all, we are not certain where or when this book was bound. It certainly could have been bound in Plantin's operation in Antwerp shortly after its printing. Christopher Plantin's initial foray into the publishing world was as a bookbinder, and Plantin's operation in Antwerp would have provided binding services to clients. So let us assume that this work was bound either by Plantin or one of his bookbinding colleagues in Antwerp. Let's also assume that it was bound shortly after it was printed some time in 1582 or 1583.

Plantin himself was very interested in publishing religious works as well as works on botany, herbals that described the medicinal effects of plants, because they sold well. Plantin was an astute businessman, but had to deal with the realities of his time. In 1582, life in Antwerp for anyone was not easy, in the course of the Eighty Years' War with the Spanish. In 1576, the Spanish sacked Antwerp, resulting in the loss of thousands of lives and enormous property damage. At the start of 1582, the citizens of Antwerp welcomed the arrival of François, Duke of Anjou (1555–84), fifth son of Henry II and Catherine de' Medici of France. François, once a prospective candidate for the hand of Elizabeth I of England, was seen as an acceptable alternative to Philip II of Spain (1527–98). Plantin indeed published an illustrated account of François's triumphal entry into Antwerp, not only in recognition of the importance of François but also symbolizing the rank of Plantin as the most significant publisher in Antwerp.

However, it is now well known that in spite of Plantin's outwardly demonstrations of loyalty and Catholicism, there was significant support by Plantin and his presses for those opposed to Spain and France as well as non-Catholic traditions. We can only assume that the desecration of a Benedictine hymnal was a political and religious statement by Plantin, or his bookbinding colleagues, in Antwerp.

Costa's book on the medicinal plants of India, found within this binding, is a significant work, albeit nothing more than a quick summary of the original published first in 1578. This 1582 edition published by Plantin was heavily edited and translated by Carolus Clusius (1526–1609). Clusius probably first encountered the works of Costa and Costa's colleague in India, Garcia de Orta (1501?–68), while visiting the Iberian peninsula in 1564 and 1565 to collect plants (resulting in Clusius's book Rariorum Aliquot Stirpium per Hispanias Observatarum Historia, published in 1576 by Plantin). Clusius certainly understood the importance of de Orta and Costa's work, and urged Plantin to publish his translations. Plantin agreed, and Costa's work saw several further editions by Plantin in 1593 and 1605. For Plantin, Costa's book was a commercial success, and for Clusius, it provided details about an exotic flora thousands of miles away.

This book, then, is important both for its content and its cover. Certainly the abuse of a Benedictine hymnal was symbolic of the entire political revolt against Spanish rule. In this case, the binding really is revolutionary, a symbol of resistance and a reflection of the political state of northern Europe at the end of the sixteenth century.