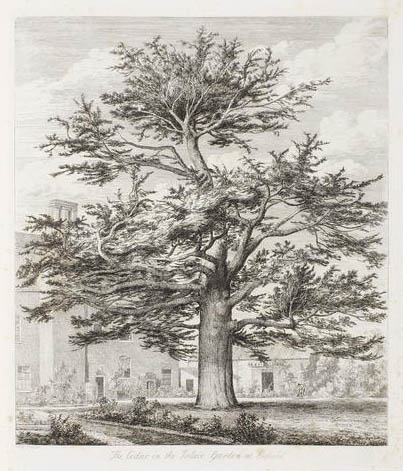 Jacob Strutt (1784–1867) had developed a fine reputation as a portrait painter in early nineteenth century England. This business was financially and professionally significant for Strutt, but in the 1820s he turned his attention from people to trees. Why?

His portraits of magnificent trees in England were collected in an amazing collection entitled Sylva Britannica; or, Portraits of forest trees, distinguished for their antiquity, magnitude, or beauty, first published in London in 1822 and reissued many times over the next two decades. The Lenhardt Library of the Chicago Botanic Garden includes in its collection a very fine copy of this work that was published in 1826 by Henry G. Bohn with 50 perfect plates. This work is becoming increasingly scarce because of those beautiful engravings, a target for the guillotines of print dealers. The binding and letterpress are discarded by these print raptors, some of whom have hired colorists to further ruin these images.

Strutt imagined the trees in Sylva Britannica as noble remnants of a former era. He was interested in creating portraits of these trees as a record of their existence in spite of man, and as a stimulus for their preservation. In early nineteenth-century England, there was a deep fascination with ancient and medieval history to the point where some estates would include fake ruins of castles, monasteries, and other buildings. These follies were simply symbols of an ancient time and were totally nonfunctional. Strutt took advantage of this interest in antiquities to present his engravings of some truly long-lived citizens of the British Isles, and met with a receptive, even enthusiastic, audience.

There has always been deep concern for British trees and their habitats among the English. William the Conqueror (1028–87) codified this interest into his forest laws, which protected the flora and fauna of England's forests. Most of us mistakenly imagine these laws in their Robin Hood version, based on too many viewings of Errol Flynn as Robin Hood dining on dastardly Prince John's royal venison purloined from a royal forest. William's forest laws protected both forests and the wildlife that they contained, so in some ways could be viewed as the earliest efforts at conservation. The laws were never popular, and were weakened by the Magna Carta (1215) and subsequent actions.

Over time, many British forests were harvested for their timber or cleared for agricultural purposes. Eventually this destructive path led to a shortage of trees, reaching the attention of the Court and King Charles II (1630–85). The newly created Royal Society, one of the first scientific organizations in the world, was brought into action on this issue. John Evelyn (1620–1706), best known today for his diaries but at the time a member of the Society, presented a paper to the Society in 1662 on the problem. This paper was expanded into the first great monograph from the Royal Society, entitled Sylva, or a discourse of forest-trees and the propagation of timber, published first in 1664 (and subsequently reprinted many times).

Evelyn suggested that landowners need to be encouraged to plant more trees, expand forests, and think about timber as a sustainable crop. These relatively modern notions were certainly necessary in a country where timber was the major building material; the most important component in ships (and a lack of timber limited the expansion of the Royal Navy); and a source for charcoal, a necessary ingedient in ironmaking (until the introduction of coke in the eighteenth century).

Given the long decline of British forests, the scarcity of virgin tracts, and an interest in all things "antique," it is not surprising that Strutt's collection was viewed as an beautiful catalog of arbor nobles. These magnificent, stately illustrations (see the illustration above, entitled The Cedar in the Palace Garden at Enfield, planted between 1662 and 1670, around the time of the first appearance of Evelyn's Sylva) certainly inspired an interest in trees, especially the most ancient, that continues to this day. Organizations such as the British Tree Council, American Arbor Day Foundation, and American Forests, as well as arboreta, gardens, and parks, stimulate an interest in trees—especially the preservation of magnificent older specimens. The Tree Council compiled an inventory of the 50 Great Trees in the United Kingdom in 2002 for the Golden Jubilee of the Queen. In the United States, there are many compilations of the largest and oldest trees. The best known is American Forest's National Big Tree Program; the 2013 edition of the National Register of Big Trees listed 786 national champions.

Strutt would certainly find these efforts by the Tree Council, American Arbor Day Foundation, American Forests, and other organizations fascinating. But he probably would be even more pleased with a recent study published in the most prestigious scientific journal in the world, Nature. Published in the issue dated March 6, Nathan Stephenson of the U.S. Geological Survey and his many colleagues examined more than 600,000 specimens, representing 403 tropical and temperate tree species. They found:

"… for most species, mass growth rate increases continually with tree size. Thus large, old trees do not act simply as senescent carbon reservoirs but actively fix large amounts of carbon compared to small trees; at the extreme, a single big tree can add the same amount of carbon to the forest within a year as is contained in an entire mid-sized tree." (emphasis added)

Large, old trees are not simply decorating the landscape. They are not just symbols of a long lost era. Instead, they are carbon sinks, beautiful repositories scrubbing the atmosphere of a greenhouse gas, making the planet all the more livable in the future. Strutt's adoration of these arbor nobles indeed was well placed, inspiring us to admire these living heroes and their ongoing work for all life on Earth.