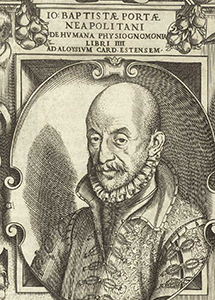 Giambattista della Porta (c.1535–1615), a remarkable sixteenth-century genius in a century of polymaths, was a scientist, engineer, cryptographer, playwright, and founder of the world's first scientific society. He even dabbled in botany. Why would this friend of Galileo (1564–1642) bother with plants?

The Lenhardt Library at the Chicago Botanic Garden includes in its collection a seventeenth-century edition of Porta's most famous botanical work, Phytognomonica. The Garden's copy was published in Rouen in 1650, 62 years after the first edition appeared in Naples in 1588 (see Figure 1 below). All of Porta's books were widely popular during his lifetime and for a century after his death, appearing in multiple editions, translations, and even pirated volumes. Yet today, Porta—shown at left from the title page of his De humana physiognomonia, published in 1586—is largely unknown to the general public, unlike some of his colleagues and friends like Galileo. 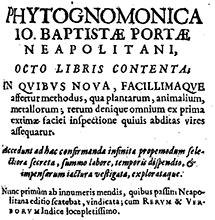 Fig. 1: A portion of the title page of 1650 edition of Phytognomonica

Giambattista certainly sent notice to the European scholarly world of his intellectual capabilities with the publication of his first and most famous book, truly his magnum opus, entitled Magiae naturalis, in 1558. This work was reissued in many editions and translations well into the seventeenth century. You might even find a reprint of an English translation today in an antiquarian bookstore.

Magiae naturalis provides clues into Porta's modus operandi, his approach to a given subject. He proposed that an individual could look at the natural world in two ways, as a magical place ready to be controlled, or as an environment awaiting decipherment and deeper understanding. In one way, Porta approached nature like a puzzle, a challenge to his cryptographic imagination (his skills as a cryptographer were not surpassed for centuries).

Giambattista explained his worldview in Magiae naturalis in this way (an excerpt from a 1669 London edition, found in Marie Boas's classic The Scientific Renaissance 1450–1630, which was published originally in 1962):

"There are two sorts of Magic: the one is infamous, and unhappy, because it hath to do with foul spirits, and consists of Enchantments and wicked Curiosity; and this is called Sorcery ... The other Magic is natural; which all excellent wise men do admit and embrace, and worship with great applause; neither is there any more highly esteemed, or better thought of, by men of learning."

Many have interpreted these remarks as Porta's condemnation of alchemy and "sorcery" and his support for experimental science. However, Porta seemed always on thin ice with the church for his scientific investigations, so such a conclusion may be rash. Porta and the church certainly had different ideas about the boundaries between natural philosophy (science) and the occult.

The church, for example, was concerned about Porta's club, Academia Secretorum Naturae, the first ever society of its kind dedicated to science. It was founded in 1560 in Naples, two years after the initial publication of Magiae naturalis. Pope Gregory XIII (1502–85), reformer and calendar reviser (as in the Gregorian calendar), thought Porta's society tinkered too often in the occult—in spite of Porta's condemnations of black magic in the pages of his most well-known book. Hence, Academia Secretorum Naturae died in 1578, in face of the full wrath of the Inquisition.

Giambattista's secret club became the model for the Accademia dei Lincei, which first appeared in 1603 in Rome. In turn the Accademia dei Lincei eventually inspired the Royal Society in London, established in 1660, and every scientific society ever since. Galileo and Porta were both members of Accademia dei Lincei. They used the symbol of the society, a lynx, in their publications. Indeed the notion of the lynx as a symbol of visual and mental acuity, was adopted from Porta's Magiae naturalis.

For all of Porta's scientific acumen and creativity, he seemed to accept some classical interpretations of nature with little objectivity. That's why I find Phytognomonica so amazing. Why did Porta accept the notion of signatures so readily? Phytognomonica is really a collection of symbolic pseudoscience, with the shapes or physical characteristics of plants as "signals" of its utility to humans. Really, Giambattista?

Nonsense was little tolerated by Porta, and there's plenty of evidence for his lack of patience with medieval silliness. For example, there was a common myth that onions and garlic could affect the performance of magnets, such as those used in compasses. In Magiae naturalis, della Porta noted:

"It is a common Opinion among Sea-men, That Onyons and Garlick are at odds with the Loadstone: and Steersmen, and such as tend the Mariners Card are forbid to eat Onyons and Garlick, lest they make the Index of the Poles drunk. But when I tried these things, I found them to be false: for not onely breathing and belching upon the Loadstone after eating of Garlick, did not stop its vertues: but when it was all anoynted over with the juice of Garlick, it did perform its office as well as if it had never been touched with it." 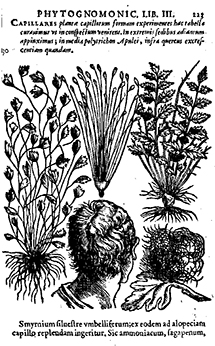 Fig. 2: Ferns and hair, as illustrated in Phytognomonica

Porta's experimentation proved this mythology incorrect—onions and garlic have no effect on the performance of magnets. Where is Porta's experimental side in Phytognomonica? Giambattista's acute observational lens was not focused on testing centuries of notions supporting the doctrine of signatures. He accepted the suggestion that maidenhair ferns (Pteridaceae) were useful in resolving baldness, thanks to their hair-like structures (see Figure 2). Botanist Theo Holm (1854–1932) wrote in a paper about Porta in 1918 in the journal American Naturalist:

"It is, indeed, difficult to understand how a man so intellectually gifted as Porta would ever waste his time and labor on such problems as to demonstrate the secret virtues of plants by merely observing the forms of their parts and the color of their flowers. Thus according to Porta certain species of Orchis with the roots palmate, and grasses with the spikes in fives (Cynodon dactylon) would be a safe remedy for diseases in foot or hand, for gout, etc.; plants with heartshaped roots or fruits (Valeriana, Persea) for heart disease; plants with the flowers resembling eyes (Aster, Sedum) for eye diseases." (See Figure 3.) 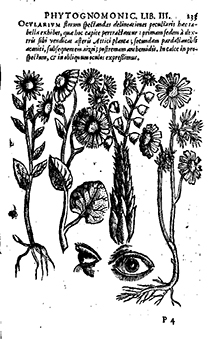 Fig. 3: Aster and eyes, as illustrated in Phytognomonica

I certainly agree with Holm that it seems incredible that Porta would accept the doctrine of signatures so wholeheartedly. What I had expected of Porta in Phytognomonica was a more experimental test of signatures, correlating a plant's physical appearance with evidence of medical success. Bradley C. Bennett, of the Center for Ethnobiology and Natural Products at Florida International University, examined some 80 different plants with heart-shaped leaves, a "sign" that a given plant might help cardiac problems. Of the 80 species, only three (or four percent) had health benefits related to the heart. Certainly Porta could have carried out some sort of primitive version of Bennett's test, published in 2007 in the journal Economic Botany.

Yet Phytognomonica is a significant work, thanks to Porta's keen observations. According to Holm, Porta devised a classification scheme for plants based on their ecology. Porta collected information on the kinds of soils that certain plants preferred, as well as local environmental conditions that best suited them. According to Holm:

"His principal object was to demonstrate the virtues or properties possessed by plants, and, as stated above, Porta combined these with the general aspect of plants, the shape of their leaves, stems, etc. While making these observations in the field, as he did, Porta became aware of the distribution of a number of species under conditions very variable, and especially with regard to the soil. He noticed the fact that the general aspect of the plants, their shape, color, odor, hairiness or smoothness, at least to some extent, depended upon the environment in which they grew, and from this point of view, we might say "biologic," did Porta elaborate the introduction to his Phytognomonica. He divided the plants in two groups, aquatic and terrestrial, each with several subdivisions. Of the former, examples are given of species characteristic of lakes, swamps, rivers, brackish marshes, etc., and he described the habit of several plants, in most cases very correctly. With respect to the terrestrial plants Porta distinguished between those that occupy a rich, a dry, or a sandy soil, illustrated by Malva, Lithospermum, and Foeniculum. ... In bringing these facts together Porta certainly laid the foundation of plant ecology ... ."

Poor Porta! Most histories of ecology ignore his contributions in Phytognomonica. Instead, these histories vaguely nod in the direction of Theophrastus (371–287 B.C.E.) and Aristotle (384–322 B.C.E.), and then skip a few millennia. Porta is forgotten, in their assumptions that all human interest in the ecology of animals and plants started, at the earliest, with Linnaeus (1707–78), gaining momentum in the nineteenth century with Darwin (1809–82), Wallace (1823–1913), von Humboldt (1769–1859), and culminating with the efforts of the University of Chicago's Henry Chandler Cowles (1869–1939) in the Lake Michigan dunes.

Phytognomonica gives us a view of those turbulent intellectual times in fifteenth- and sixteenth-century Europe. Classical and medieval ideas about the nature of the world were being challenged, when evidence warranted. Hence the eventual success of Nicolaus Copernicus (1473–1543), Tycho Brahe (1546–1601), and Johannes Kepler (1571–1630) was largely achieved with data collected by the new scientific instruments—telescopes—and properly interpreted by individuals such as Galileo. For Porta, there were no instrumental equivalents to the telescope in the botanical sciences until the microscope finally arrived. Porta's ecological classifications have been forgotten without more substantial evidence for his observational claims. Phytognomonica's designation as an encyclopedic analysis of the doctrine of signatures masks Porta's real scientific contributions. Today, we might champion Porta as the father of plant ecology, rather than as a misguided genius, dancing adroitly from one subject to another.