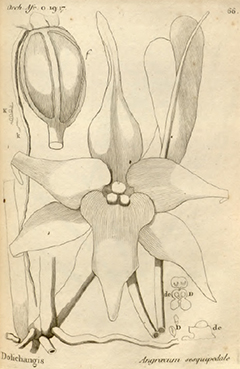 This month's fantastic orchid exhibition at the Chicago Botanic Garden includes spectacular printed works on exhibit in the Lenhardt Library, illustrating orchids along with stunning manuscripts by Philip Henry Gosse (which I discussed in this column in July 2012) and Friedrich Wilhelm Ludwig Kränzlin (examined in this column in November 2013). Given that the Library has more than 600 books and journals about orchids, I could literally dedicate any number of future columns to dear orchids. I will resist that temptation, but instead will turn to another monograph in the Library's exhibition by none other than Charles Darwin (1809–82), entitled On the various contrivances by which British and foreign orchids are fertilised by insects, and on the good effects of intercrossing. Published by John Murray in London on May 15, 1862, the book explores Darwin's notions about evolution extended to the interaction of animals and plants over time to their mutual and long-term benefit.

Darwin certainly needed support for his notions about the development of organisms over time on this planet. There was a rush to find both living and fossil proof of Darwin's ideas. I can only imagine Darwin's excitement over the discovery of Archaeopteryx in 1861! Archaeopteryx, at the time the most ancient bird (at an age of 150 million years), was very reptilian. This extinct creature was first recognized by a single feather, found in 1860; a well-preserved skeleton was found a year later in the lithographic limestone of Bavaria and eventually found its way to London's Natural History Museum. Hugh Falconer (1808–65), in a letter to Darwin dated January 3, 1863, noted that "Had the Solenhofen quarries been commissioned—by august command—to turn out a strange being à la Darwin—it could not executed the behest more handsomely—than in the Archaeopteryx."

I often have collected fossils in the limestone quarries in Bavaria around Solnhofen and Eichstätt with my wife, brother, and friends, but have not found even a trace of Archaeopteryx. We've uncovered plenty of cephalopods, but nary a Darwinian delight in those explorations. In over 150 years, only ten specimens of Archaeopteryx have been discovered. For Darwin, this urvogel was an exceptional example in favor of his notions spelled out in On the origin of species, which first appeared in print on November 24, 1859. However, other proof in support of Darwin took a little longer, like his connections between orchids and insects. 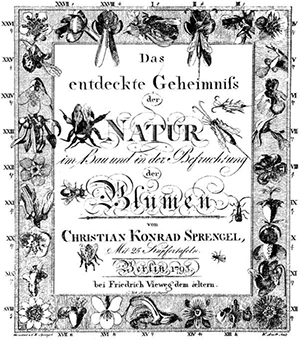 It took Darwin ten months to organize years of research for the publication of On the various contrivances by which British and foreign orchids are fertilised by insects in 1862. By his own admission, he had been thinking about the relationships of insects and plants since the summer of 1839. He was inspired to continue this work in part by Christian Konrad Sprengel's (1750–1816) Das entdeckte Geheimnis der Natur im Bau und in der Befruchtung der Blumen, which first appeared in 1793 in Berlin. Sprengel was the first to recognize the important role of insects in the fertilization of plants. Sprengel's work was criticized by many, including Johann Wolfgang von Goethe (1749–1832), and then simply ignored. Darwin recognized the importance of Sprengel's ideas in orchids, postulating unusually equipped insects coevolving to handle the intricacies of orchid flowers. In fact, Darwin singlehandedly resurrected Sprengel's ideas, restoring his scientific insights and reputation in spite of the demigod Goethe.

Thanks to my colleagues Donna Herendeen and Stacy Stoldt, I was able to discover in the literature several excellent reviews of Darwin's outrageous prediction and its eventual proof over a century later. The story for Darwin begins in January 1862, with Darwin opening a box of Madagascan orchids, including very unusual flowers of Angræcum sesquipedale (see above the first illustration of this orchid, from Louis Marie Aubert Aubert Dupetit-Thouars' [1758–1831] Histoire particulière des plantes orchidées recueillies sur les trois îles australes d'Afrique, de France, de Bourbon et de Madagascar, published in 1822 in Paris). Darwin was stunned by the length of this orchid's nectar tube, measuring more than 11 inches long. Darwin experimented manually in an effort to understand how this orchid could reproduce. He concluded that a large moth with a very long proboscis would be necessary, and incorporated his assertions in the manuscript of his latest book. Darwin wrote in On the various contrivances (pp. 197-198):

"I fear that the reader will be wearied, but I must say a few words on the Angræcum sesquipedale, of which the large six-rayed flowers, like stars formed of snow-white wax, have excited the admiration of travellers in Madagascar. A whip-like green nectary of astonishing length hangs down beneath the labellum. In several flowers sent me by Mr. Bateman I found the nectaries eleven and a half inches long, with only the lower inch and a half filled with very sweet nectar. What can be the use, it may be asked, of a nectary of such disproportional length? We shall, I think, see that the fertilisation of the plant depends on this length and on nectar being contained only within the lower and attenuated extremity. It is, however, surprising that any insect should be able to reach the nectar: our English sphinxes have probosces as long as their bodies: but in Madagascar there must be moths with probosces capable of extension to a length of between ten and eleven inches!"

Botanists welcomed Darwin's views, praising his new book, but other individuals, such as creationists, were not amused. They doubted that Darwin's imaginary moth would ever be found. In support of Darwin, Alfred Russel Wallace (1823–1913) examined moth specimens in the British Museum, discovering several species with long (but not 11 inches long!) probosices.

Darwin died on April 19, 1882, never seeing his imaginary moth. It was not until 1903 that Xanthopan morgani praedicta was described from Madagascar by Baron Rothschild (1868–1937) and Karl Jordan (1861–1959) with the appropriate proboscis, curled much like a fire hose. However no one actually saw Xanthopan interact with Angræcum. In 1992, or 130 years after Darwin's initial prediction, Xanthopan were recorded hovering in Madagascar with Angræcum. Video evidence was captured in 2004, and can be found on YouTube.

Some have called Darwin's On the various contrivances by which British and foreign orchids are fertilised by insects, and on the good effects of intercrossing his greatest scientific work, based on its accumulation of detailed evidence, understanding of the complexities of orchid anatomy, and creative genius (predicting a creature yet unknown in the world). For Darwin, orchids were marvelous organisms, demanding a thoughtful and inventive leap to imagine their importance in the natural world. In resurrecting Christian Konrad Sprengel's notions about pollination, combining them with his careful examinations of orchid flowers, Darwin pointed out that evolution was not a solitary track, but a more complicated process of interaction between organisms and their environment. It is no wonder that we still marvel at the riches that can be found in Darwin's texts, so many years after their initial appearance.