Letters from an eighteenth-century traveler and a botanical inventory 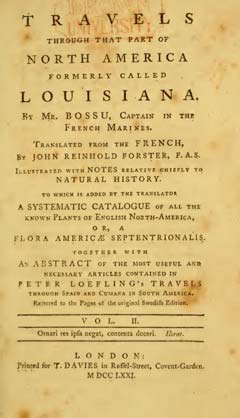 Imagine visiting the middle of the North American continent two hundred and fifty years ago. What would a visit to New Orleans be like? Who lived in Illinois?

These questions, and many others, can be answered by reading Jean-Bernard Bossu's (1720–92) Travels Through That Part of North America Formerly Called Louisiana. The Lenhardt Library has the English translation, first published in 1771. It includes a botanical inventory by Peter Loefling (also known as Pehr Löfling, 1729–56), a plant explorer working as intellectual agent for none other than Carl Linnaeus (1707–78).

Bossu's work is in the form of 21 letters written over an eleven-year period to the Marquis de L'Estrade. His first stop in North America was New Orleans, which he describes in his second letter, dated July 1, 1751. Bossu's New Orleans has none of the features that we might expect in the French Quarter, such as St. Louis Cathedral or the Presbytere (all of which appeared four decades later). However, the city (what we know today as the French Quarter) had its famous grid, created originally after a hurricane in 1722. Bossu noted that "streets run all in straight lines."

The inhabitants of New Orleans are Europeans, Americans, Africans, and Mestizos (mixed European and native American heritage). Bossu is most impressed by the Creoles. He describes them as "very brave, tall, and well made" with the rich sending their children to France for school, the "fair sex, whose only art is that of pleasing, are already born with that advantage, and have no need to acquire it in Europe." The natives speak French well, or "pretty pure."

Bossu is charmed by New Orleans and its inhabitants, calling it "enchanted" thanks to the "purity of its air, fertility of its soil, and beauty of its situation." He calls the water of the Mississippi "pure and delicious" and in a footnote remarks that the River's waters have the "quality of contributing to the fecundity of women." 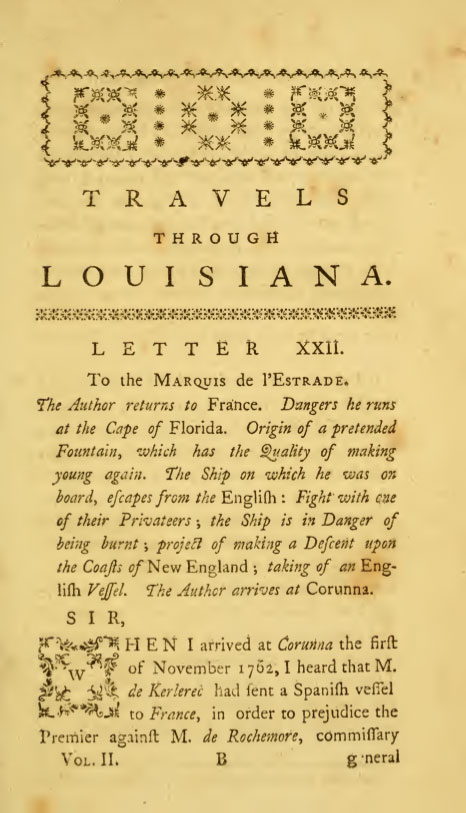 After his brief time in New Orleans, Bossu heads north to Natchez, Mississippi, then to Arkansas, and eventually to Fort de Chartres in southern Illinois. Bossu seems quite entranced by native Americans along his entire journey on the Mississippi. In Natchez, Bossu blames the French for insulting the native Americans, eventually leading to a massacre of more than 200 people in 1729. In his third letter, dated September 10, 1751, he writes that "I must do justice to the Indians…it was the bad conduct of an officer, who insulted a people whom he ought to have treated gently, that roused their anger."

In his fourth letter, Bossu spends a great deal of time with native Americans whom he calls the Akanzas. "The Akanzas have adopted me; they have acknowledged me as a warrior and a chief, and have given me the mark of it, which is the figure of a roe-buck imprinted on my thigh." Bossu admits that the application of his buck tattoo was "painful" and "very violent" but that it provided him protection in his further travels along the Mississippi. "I could go to all the people who were their allies…show my mark, and I would be well received; that I was their brother…"

At Fort de Chartres (in present-day Randolph County, Illinois), Bossu hires a local native American to hunt game in the winter of 1752, and is quite impressed with his "sentiments of honor" and "common sense." He even notes that some Europeans are more "ridiculous and barbarous" than "American Indians." Yet Bossu also notes that it is a "pity that so fine a country is not inhabited, or is inhabited only by brutes!"

Peter Loefling contributed a botanical inventory of plants known in North America to complete the second volume of this work. It includes a short biography of Loefling, as well as a more complete description of plants found in South America. Loefling spent two very productive years in what is now Venezuela, describing plants as a scientific agent for the Spanish government as well as for his mentor Linnaeus. At the time of his untimely death, Loefling had described about thirty new genera and 250 species unknown to Linnaeus. This work provides the first glimpse into the botanical genius of one of Linnaeus's most important students. The genus Loafling was named by Linnaeus in honor of Peter's work in South America.

Both Bossu and Loefling were dedicated to the New World, to the opportunities that North and South America offered both explorers, and as the means to pay homage to their colleagues and sponsors in Europe. Travels Through That Part of North America Formerly Called Louisiana (1771) provides insight into a long-vanished truly new world, that induced awe and intellectual curiosity in these visitors.