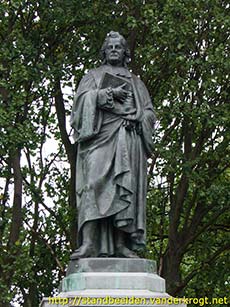 Rare books surprise you, appearing in the most unexpected places. Take the latest acquisition of the Lenhardt Library. It is entitled A Treatise on the Powers of Medicines, by the Late Learned Herman Boerhaave. Translated from the Most Correct Latin by John Martyn. This book was published in London in 1740.

Where did I find it?

A month ago, I was a volunteer at a public library book sale. I was asked by the book wrangler for the sale to move large, heavy boxes of donations, my usual bibliomule assignment. At one point, the wrangler asked me if I would like to take a break and examine a few old books. Perhaps they were valuable or interesting, she said.

I’ve grown accustomed to being shown “old” books, disappointed by yet another family Bible, nineteenth- century Shakespeare, or umpteenth edition of Poe, Twain, or Verne. All but one of these tomes met my expectations, an unassuming volume in the usual two-quart baggie. Its leather covers were detached, but the covers and spine piqued my interest, thanks to their genuine eighteenth-century workmanship.

I pulled the volume gingerly from its plastic wrapper, and opened it to the title page. Imagine my surprise when I discovered Dr. Boerhaave! He was the last person I expected at this book fair.

Herman Boerhaave (1668–1738) was one of the most important scientific figures in eighteenth-century Europe. He taught medicine, botany, and chemistry at the University of Leiden in the Netherlands; students and scholars flocked to Leiden to study with him, including Peter the Great (1672–1725) and one character important to all of us, Carolus Linnaeus (1707–78). His lectures at the University, always in Latin, were a tourist attraction. Visitors to the Netherlands would travel to Leiden and pay students to reserve seats in Boerhaave’s lecture halls, since his talks were always SRO.

Boerhaave became a fast friend and supporter of Linnaeus. Both attended and graduated from the same medical school in the Netherlands, the diploma mill known as the University of Harderwijk. Linneaus earned his Harderwijk medical degree in a week. Samuel Johnson (1709–84)—yes, THAT Samuel Johnson—noted in his biography of Boerhaave (published originally in 1739 and online at http://www.samueljohnson.com/boerhaave.html) that the great doctor earned his medical degree with a dissertation on the medical value of examining poop as a diagnostic tool for illness. Harderwijk eventually disappeared as a medical diploma mill in 1811.

Boerhaave was instrumental in helping Linnaeus make several crucial connections in the Netherlands, with physician/botanist Johannes Burman (1707–80) as well financier and director of the Dutch East Indies Company George Clifford (1685–1760). Boerhaave tried with all his persuasive skills to convince Linnaeus to remain in the Netherlands, rather than return to Sweden to his girlfriend (and eventual wife), Sara Elisabeth Moraea. Boerhaave failed, and Linnaeus returned home in June 1738, after publishing some of his most important works in the Netherlands. These books include works by Linnaeus in the Lenhardt Library such as Hortus Cliffortianus (1737, a magnificent description of George Clifford’s spectacular gardens) and Flora Lapponica (1737, an account of the plants of Lapland).

Back to Boerhaave’s Treatise on the Powers of Medicines in my hands at the book sale. In the Lenhardt Library, we have a 1727 volume by Boerhaave in Latin on the plants in the Leiden University garden. Boerhaave also penned the introduction to a flora of Paris, Botanicon Parisiense, written by Sebastien Vaillant (1669–1722), published in Leiden in 1727. Unfortunately, the Lenhardt Library had no work by Boerhaave in English, this most famous physician and botanist of the eighteenth century (Boerhaave’s portrait for a time appeared on 20-guilder notes in Holland, before the euro chased that currency into history).

The translator John Martyn (1699–1768), was well known in London as an apothecary and plant specialist. He was one of first individuals to receive a copy from Linnaeus of Flora Lapponica, which led to a flurry of letters between the two. Martyn is immortalized at a taxonomic level, thanks to the genus Martynia and the family Martyniaceae.

Dr. Boerhaave has always been one of my favorites in botanical history, because of his support of young Linnaeus. But I have another reason, too.

Years ago, my wife and I were officers on different boards for the International Federation of Library Associations and Institutions, headquartered in The Hague. We would travel to the Netherlands at least twice a year for meetings and other responsibilities. We almost always bunked with friends in Leiden on these trips, Jacques and Maria, who lived in a large home on Boerhaavelaan. Every morning on my way to the Leiden train station, I would greet a statue of Herman Boerhaave. On my return, I would wish the great doctor good night. If I had some free time in Leiden, I would visit his gardens at the University and walk around the great campus, where he lectured.

I appreciate Dr. Boerhaave’s help in assisting serendipity that eventually led me to his volume. You just never know where a truly rare book will appear.