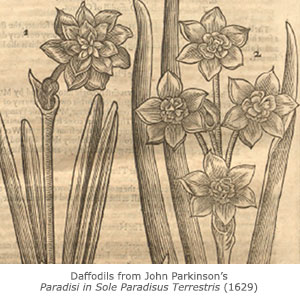 Herbals contain tales and stories about the health benefits and hazards of many plants, some of which we might find incredible today. Take the mandrake, or Mandragora, made famous in the Harry Potter novels. In many herbals, there are elaborate directions for harvesting and using mandrake, with fascinating woodcuts illustrating the male and female varieties (based on the limb-like shape of the roots). We may giggle at the notion of screaming plants, but the chemistry of Mandragora is no laughing matter. With tropane alkaloids, mandrake is a serious chemical factory, like other members of the nightshade (or Solanaceae) family. How can we cull useful medical experiences from ancient herbals, while discarding the ridiculous?

Let's itemize the problems in rescuing scientifically valid information from books printed centuries ago. There's certainly the question of identity. All of the plants described in early printed herbals are identified with colloquial names, pre-Linnaean labels. Ground zero for modern taxonomy is 1753 with the appearance of Carl Linnaeus's (1700–78) Species Plantarum. Before Linnaeus, plant names were examples of scientific verbosity. Just examine descriptions of Narcissus in John Parkinson's (1567–1650) Paradisi in Sole Paradisus Terrestris (1629): Narcissus latifolius omnium maximus, amplo calice flauo, siue Nompareille, Narcissus latifolius flauo flore amplo calice, siue Mattenesse, or Narcissus albus oblongo calice flauo serotinus, duobus floribus in caule. These names were Latinized versions of gross anatomy, not unique identifiers establishing a species. For modern plant hunters, one trick requires a correlation of ancient (a.k.a. pre-Linnaean) to modern scientific names. If a given rare book is well illustrated, if the physical description in the text is detailed, and if that plant itself is sufficiently common (so specimens can be harvested), it might be possible to correlate old to new names.

Some plants may be inaccurately identified in herbals due to local scarcity, market demands, or ignorance. Take mandrake, a plant much in demand for both its medicinal virtues and its use in magic. As Marie-Christine Daunay, Henri Laterrot, and Jules Janick point out in their paper entitled "Iconography and History of Solanaceae" (2008), mandrake juice was used as an antibacterial agent or even a painkiller. It could reduce inflammation or cure sleeplessness. But strong mandrake potions could induce hallucinations and cause death.

The demand for mandrake led to an active business in botanical counterfeits. William Turner (1508–68), in his A New Herball (1551–68), points to the sale of pseudo-mandrakes to unsuspecting individuals. Even identification was a problem in Elizabethan England. As noted by Anthony John Carter in his paper "Myths and Mandrakes" (2003), Turner was disappointed that certain merchants would sell a plant that we know today as Bryonia dioica, physically altering roots to resemble mandrake. White bryony (the common name for Bryonia) can be quite dangerous. For modern investigators, accurate identification can be problematic, working only with woodcuts and text.

These issues in capturing viable information from old herbals were resolved by Eric Buenz and his team, originally at the Mayo Clinic. Working with digitized versions of herbals, text was analyzed with algorithms to identify plants, taking advantage of details in the International Plant Names Index (ipni.org). Data on medicinal properties was extracted using a vocabulary server, to understand which part of a specific plant was used for which specific ailment. Once the correct plant is found, and its specific use understood, pharmaceutical research then focuses on the plant's active agents.

This technologically sophisticated approach has yielded some success. In examining Herbarium Amboinense (1741–50) by Georg Eberhard Rumphius (1627–1702), Buenz and his colleagues discovered Rumphius's descriptions of the antibacterial effects of kernels of the atun tree (Atuna racemosa). This herbal bioprospecting was confirmed by ethnobotanical studies, which found a variety of medicinal uses of Atuna by natives in the South Pacific. Extracts were made from Atuna's kernels and tested for their utility against bacteria. Buenz and his team found that Atuna worked quite well in defeating Staphylococcus, especially those strains resistant to other antibacterial agents. No wonder the New York Times found this story newsworthy, printing it under the catchy headline "17th-Century Remedy; 21st-Century Potency."

Buenz started Standardized Supplements, a company to develop and market supplements based in part on his bioprospecting. These efforts confirm the continual value of herbals as scientific resources. For modern researchers, libraries and their rare book collections are indeed extensions of laboratories into the past, where experiences can lead to modern pharmaceutical and medical discoveries centuries later.