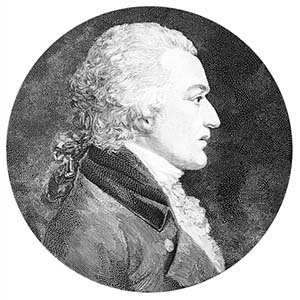 "The trees are coming into leaf
Like something almost being said;
The recent buds relax and spread,
Their greenness is a kind of grief."
— Philip Larkin (1922-1985)

In this coldest month, we optimistically think of frondescence, the arrival of spring marked by the first leaves uncurling on tree limbs. This revitalization of plants has been carefully recorded for centuries, a signal of the return of life after its long hibernation during winter.

Frondescence carried weight in the past as a signal to plant certain crops. Linnaeus thought that birch frondescence was a good indicator for the planting of barley. Others, such as Benjamin Smith Barton (1766–1815), extended these notions, thinking that frondescence could provide some clues about climate and its variation over time and space.

Barton was one of the most important scientists in early America, and his influence can hardly be underestimated. As an intellectual colleague of President Thomas Jefferson (1743–1826), Barton single-handedly shaped the direction of American science at the start of the nineteenth century in both deed and text. His Elements of Botany, originally published in Philadelphia in 1803, was the first great botanical textbook in the United States. It appeared altogether in six editions, three of which appeared in Barton's lifetime. The Lenhardt Library of the Chicago Botanic Garden has three editions of Elements of Botany in its collection, including the original 1803 edition, the 1827 third edition, and the 1836 edition. The 1836 version was revised by Benjamin Smith Barton's quite illustrious nephew—physician and botanist William P.C. Barton (1786–1856).

The acquisition of 530 million acres in 1803 from France, the Louisiana Purchase, inspired much speculation about the nature of the American West. There was some thought in scientific circles in America and Europe that the flora and fauna of the western part of the North American continent was quite different from the inhabited eastern section, in part due to a warmer climate. North America, west of the Mississippi River, was almost like the moon, a largely unknown territory. Was this new territory occupied by strange creatures, thought to be extinct? Could it be hiding exotic plants, seen nowhere else?

The first great American scientific expedition, of Meriwether Lewis (1774–1809) and William Clark 1770–1838), was an attempt to answer some of these questions. Given Barton's relationship with Thomas Jefferson. Jefferson employed Barton and his Philadelphia colleagues as advisors to the expedition. It is not surprising that one of the books taken on this long journey was Barton's 1803 edition of Elements of Botany.

Yet the Lewis and Clark expedition—a trip that covered over 8,000 miles in a little more than two years—stimulated more questions about North American botany, zoology, geology, climatology, and anthropology. Benjamin Smith Barton challenged American science to answer these huge questions in his inaugural lecture of the newly formed Philadelphia Linnean Society in 1807. This society was one of several natural history organizations started in the United States in imitation of the Linnean Society of London, which itself was founded in 1788. The Philadelphia Linnean Society, started in 1806, and the Boston-based Linnaean Society of New England, beginning in 1814, eventually became extinct. Both societies, in spite of their short lives, stimulated enormous efforts in nineteenth century science. 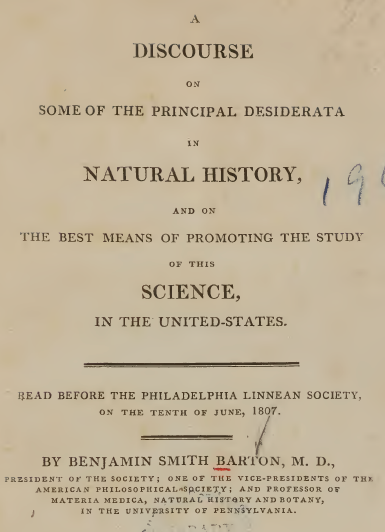 Barton's lecture, published in book form as A discourse on some of the principal desiderata in natural history, and on the best means of promoting the study of this science, in the United States, was profound, even probing. He saw future research occurring at the intersection of different disciplines, like botany and meteorology. Many of Barton's research suggestions were pursued avidly—by his immediate colleagues in Philadelphia as well as generations of scientists in the nineteenth century, such as Barton's nephew, William P.C. Barton (More about William Barton in next month's column). One might argue that Barton's big ideas continue to fuel research today.

I was drawn to Barton's Linnean Society lecture in 1807 because Barton was not afraid to ask for research on a large scale, using unimagined resources in early America. For instance, on the question of frondescence and climate, Barton wrote:

"…it would also be useful to inquire, what changes have taken place in the times of the leafing, the flowering, and the fruiting, &c, of particular vegetables, as well native as foreign? There are still living among us, many old people, who could inform us, whether the Apple, the Pear, the Peach, the imported Cherry, and others, formerly flowered at the same time that they do at present. It is known that the Lima-Bean now flowers much earlier than it did when it was first introduced among us, between forty and fifty years ago. The Franklinia (Gordonia pubescens) has, in like manner, altered its time of flowering: but I do not assert that what has taken place, in regard to these two vegetables, is a proof that our climate of Pennsylvania has undergone any change. Indeed, I am fully aware, that whatever facts we yet possess relative to an alteration in the times of the frondescence, florescence, &c, of our vegetables, must be very cautiously admitted, if they be admitted at all, as facts of any importance in the view, which I have suggested, of the changes, or stability, of the American climates."

On notions of change in climate in North America, he saw rich resources in the records and memories of indigenous Americans:

"I would suggest the propriety of collecting, with sedulous care, the traditional knowledge of our Indians concerning the changes which the continent has undergone. I am far from insinuating, that such traditions should be received as pure history: but I am persuaded that, on some occasions, much interesting information might be educed from them. …It is a point which may, I think, admit of some doubt, whether any very essential change has actually taken place in the temperature of the American climates, since the first discovery of the continent by the Europeans, in the fifteenth century; or, at least, since the first settlement of the European colonies, now called the United-States. Many facts and materials for determining this point may still be collected. For this purpose, it is obvious to propose, that inquiries should be made of the oldest people residing in the Union; but, in particular, inquiries of our Indians, who are remarkably attentive to the preservation of the memory of severe winters, uncommonly warm summers, seasons of great rain, of great drought, and other circumstances relative to the atmosphere. These inquiries might be conducted with peculiar advantage, in the southern parts of the United-States, where several of the Indian tribes, such as the Cheerake, the Chikkasah, &c, are known to have resided, in particular districts of country, for near three hundred years. Mr. Lawson informs us, that when he was in North-Carolina, in the very first years of the eighteenth century, the Indians of that country preserved the memory of an uncommonly hard winter, which had occurred there one hundred and five years before. This carries us back to about the year 1596, in the reign of Queen Elizabeth, at which time there were no European settlers in Carolina. At that time, according to the tradition, 'the great Sound was frozen over, and the Wild Geese came into the woods to eat acorns,' and were so 'tame,' no doubt through want, that the Indians killed abundance of them in the woods, by knocking them on the head with sticks."

Barton's retelling of native American records correlates to events in Elizabethan England. These recollections illustrate the impact of what is known today as the Little Ice Age, almost six centuries of severely cold weather in Europe and North America. The year 1596 mentioned by Barton is significant because it was the fourth year of terrible harvests in England, leading to riots and troubles for the Queen, such as the Oxfordshire Rising in November 1596.

Indigenous Americans were repeatedly referenced in Barton's lecture (altogether on 96 occasions) as a source of historical information on the natural history of America. Barton had no patience for what he called "little, intemperate philosophers" who "would throw a veil of doubt" on their records. Instead Barton remarked:

"To a discerning and virtuous naturalist, they are like mines, among the rubbish of which we dig, with success, for the most precious metals."

Barton's faith in native Americans was based on his own personal experiences. As a teenager, Barton worked with his uncle David Rittenhouse (1732–96) in surveying the western borders of Pennsylvania. Their friendly encounters with many native Americans led to Barton's lifelong interest in their stories, legends, and languages. Both Barton and Thomas Jefferson saw much wisdom in centuries of native American experiences. Barton and Jefferson were intensely trying to understand their origins, and thought that their diverse languages could provide many clues to their origins.

Modern research has yielded much climatological date from native American records. For example, research by Matthew Therrell and Makayla Trotter, examining winter counts of the Lakotas for centuries, has provided some scale of the severity of winters at the end of the Little Ice Age.

To return to Barton's lecture, he saw a great deal of value in understanding what we today call phytogeography:

"How easy is it, for instance, to determine the most northern (native) limits of our Live-Oak (Quercus virens), and of the Long-Moss (Tillandsia usneoides)? How easy to determine the southern limits of the Sugar-Maple (Acer saccharum)? How easy to mark the eastern boundary of Menziesia ferruginea, Aesculus flava, which we call Buck-eye, and many others. The most northern latitudes, along the seacoast, of our native Palmae are also known; and we are even capable of determining, with considerable certainty, where, in the country west of the Mississippi, many of our common Atlantic vegetables entirely disappear.

I consider the geographical view of vegetables as one of the most curious, and at the same time as one of the richest, subjects in the phytology of a country. It is intimately connected (as I have already hinted) with whatever relates to the soil and climate of a country, and, of course, with the proper management, or culture, of vegetables. It will aid us essentially in constructing a rational geology of a country, or at least it will assist us in arriving at a better knowledge of the revolutions which our globe has undergone."

Barton would have certainly welcomed decades of research on the geographic distribution of plants in North America. This work is best summarized in Robert Thorne's recent chapter, "Phytogeography of North America North of Mexico," which appeared in the first volume of the Flora of North America (you can find it online at floranorthamerica.org/Volume/V01/Chapter06). The flora of North America certainly correlates to geological, climatological, and other factors, just as Barton suspected so long ago.

Benjamin Smith Barton was one of the great intellectual catalysts in early America. His ideas in natural history led to a great flowering of research in the nineteenth century, and they continue to influence scientists in a variety of disciplines today. His monumental Elements of Botany inspired incredible interest in the flora of the United States, long before Asa Gray's (1810–88) textbooks filled America's classrooms. Barton's 1807 lecture to the Philadelphia Linnean Society established a research agenda that we continue to follow to this day. His relationships with Thomas Jefferson were the start of a long and convoluted relationship between the state and science. I can only wonder what further contributions Barton would have made had he not died at the relatively young age of 49 in 1815 from tuberculosis.