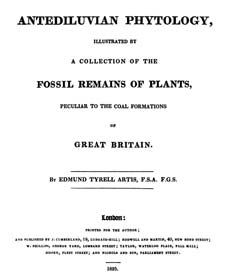 Botany is a relatively recent science, married to medicine and alchemy for centuries. Only in the nineteenth century did botany become a respectable and independent intellectual pursuit, with its own specialized journals and textbooks.

Paleobotany, or the study of fossil plants, had even more difficult pains, because its intellectual foundations were so dependent on wider acceptance of fundamental ideas in geology and paleontology. The notions of deep time, in which the age of the Earth is measured in billions instead of thousands of years, were especially crucial. There was much opposition to the concept of an ancient Earth not only from the usual quarters, but from some scientists. No less a recognized authority than William Thomson, Lord Kelvin (1824–1907), the leading physicist of his day, questioned why geologists and paleontologists needed so much time.

The study of fossil plants suffered from the strangeness of many of the older remains found in shales, nodules, and coal of what we now know as the Carboniferous Age. The Carboniferous itself was only identified as a distinct geologic formation in 1822, by William Conybeare (1787–1857) and William Phillips (1775–1828). We now know that it started some 360 million years ago, and ended 60 million years later. Most continents were located near or on the equator; with an atmosphere containing three times as much carbon dioxide as today. Plants flourished, but they were plants unlike anything today. Club mosses nearly 100 feet high grew alongside ferns and horsetails, with insects as large as some birds. It was a very different tropical forest, to say the least.

The Lenhardt Library of the Chicago Botanic Garden includes in its collection one of the earliest British monographs on carboniferous plants, with a delightful title: Antediluvian Phytology: Illustrated by a Collection of the Fossil Remains of Plants Peculiar to the Coal Formations of Great Britain. Printed in London in 1835, it was written by Edmund Tyrell Artis (~1789–1847). Illustrated with more than 20 lithographic plates, it is the first scientific attempt to understand the fossil flora of England. Unfortunately for Artis, his efforts were not completely remembered by historians and students of paleontology and paleobotany. 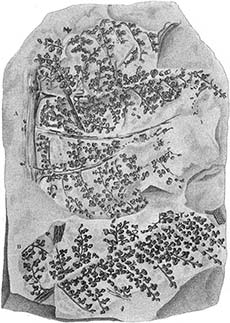 Artis essentially argues that the study of paleobotany in Great Britain has to start with an examination of all of the available evidence. He begins with some 1,500 specimens, collected from various coal mines in Yorkshire and elsewhere. Unlike some of his contemporaries, he does not name each different part of a plant as new genus or species, but tries to connect the various fossilized parts together to imagine the whole extinct organism. Artis writes in Antediluvian Phytology that

"[a] systematic arrangement must be formed, and the first step is the accurate determination of the species. … It will be seen in the course of this Work how easy it would be to imagine even parts of the same specimen to be different species, when they happen to be broken and dispersed. The author may confidently assert, that in at least a thousand different specimens which he has in his possession, he does not apprehend that more than a hundred different species can be recognized. Furthermore, still fewer indeed can be referred to any living species … ."

This scientific approach is in line with the efforts of his continental colleagues to amass large samples in order to solve a terrific prehistoric jigsaw puzzle. Solving this puzzle would always be problematic because not all of the pieces were available, and there was little in common with modern floras.

It is some 4,000 miles from Yorkshire in the United Kingdom, to Danville, Illinois, but Edmund Tyrell Artis might have made the journey in light of a most recent discovery. About a decade ago, a completely preserved carboniferous forest was found intact in a coal mine east of Danville. The forest covers nearly ten square miles, preserving in exquisite detail a rich variety of extinct plants only known to Artis in fragments. This forest was encapsulated for hundreds of millions of years, thanks to its rapid burial by an earthquake. The plants in this Danville site are closely related to many of those so wonderfully illustrated in lithographs in Antediluvian Phytology, so it would have been relatively easy for Artis to identify specimens in situ.

Indeed, Artis would have been pleased by the progress of paleobotany in nearly two centuries. He would have appreciated that some of the principles outlined in his magnum opus are still followed, even though his reputation is not as great as those fathers of the field, Count von Sternberg and Brongniart. In the nineteenth century, much significant work in the field was accomplished in the United States by Léo Lesquereux (1806–89), a Swiss colleague of Louis Agassiz (1807–73). Much of Lesquereux's work on the carboniferous plants of Pennsylvania set a standard still used today, much like Artis in England. Indeed, to paraphrase Isaac Newton, modern paleobotany was built on the shoulders of these giants in the ninteenth century. Antediluvian Phytology gives us a view of the start of this important discipline, taking "curiosities" out of coal mines and transforming them into scientific evidence of a long gone and very different world.