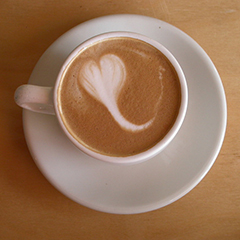 Coffee, I have to have coffee,
and, if someone wants to pamper me,
ah, then bring me coffee as a gift!

Liesgen sings her admission to coffee's power in J.S. Bach's (1685–1750) Kaffeekantate (Coffee Cantata, BWV 211), composed in 1732. Coffee, that superb stimulant, made its first appearance in Germany in the 1670s, spreading quickly and supplanting beer as a preferred breakfast beverage.

I certainly admit to coffee's seduction, drinking chicory-laced coffee from childhood to this day. My dear grammar school teachers, Sisters of Christian Charity, warned me not to inhale my daily coffee-filled thermos as it might stunt my growth. So I sacrificed my potential NBA career for those extra cups of coffee at lunch and recess.

Americans drink an enormous amount of coffee, with some two-thirds of all adults in the United States sipping at least one cup of coffee a day. Eleven percent of all American admit to consuming four or more cups a day, a group in which I claim membership.

How did coffee find its way into our diet? A few rare books provide some clues in tracking coffee's path from Africa to the Middle East to Europe and then the Americas. 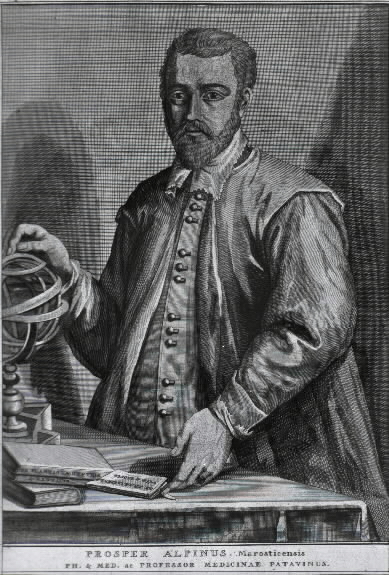 I can thank Prosper Alpini (1553–1617, see Figure 1) for introducing coffee into Europe, describing and illustrating it for the first time in print in 1591. In his De medicina Aegyptiorum (1591) and De plantis Aegypti (1592, see Figure 2), Alpini brought to Europeans coffee, bananas, and other exotics. Alpini discovered these botanical wonders in the early 1580s, thanks to a three-year sojourn to Cairo.

Alpini enjoyed remarkable access to Egyptian society by virtue of his association to Giorgio Emo, Venetian consul in Cairo. As Emo's physician, Alpini could consult with a variety of physicians on the pharmacology of Egyptian plants and explore botanical riches available to him along the Nile. His range of access was due to a long-standing diplomatic understanding between Venice and Constantinople. These international relations became the basis for much of our modern notions of diplomacy, according to Maria Pia Pedani, a historian at Università Ca'Foscari Venezia.

Constantinople and the Middle East as well as Africa needed access to European markets via Venice. In turn, the economy of Venice was heavily dependent on shipping and goods brought from faraway lands. This international economy relied on excellent diplomatic relations between Christians and Muslims, where diplomats and their associated staff, along with merchants and traders, were treated fairly, without prejudice. As Professor Pedani remarked in one of her papers: "The doge's subjects, as well as those who put themselves under the protection of their flag, were allowed to trade in all the places of the sultan's country; Ottoman subjects in Venetian lands had the same rights." 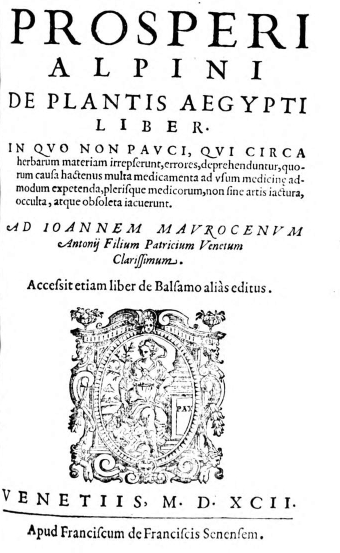 For Alpini, his association with Giorgio Emo provided him enormous opportunities in Egypt to explore its flora, while working with Muslim colleagues to understand the effectiveness of certain plants as medicines. His descriptions of Egyptian plants were not based on hearsay (as in previous printed works), but observations in gardens or in their natural habitats. His research allowed him to focus very specifically on certain kinds of plants. Alpini's De balsamo dialogus (Figure 3), published in Venice in 1591, was one of first books dedicated solely to understanding one genus, balsam; a copy of this work can be found in the rare book collection of the Lenhardt Library. The title refers to the nature of this book in the form of a dialogue on the virtues of balsam; the most famous work published in this format appeared some four decades later as Dialogo sopra i due massimi sistemi del mondo (1632). Galileo's (1564–1642) Dialogue Concerning the Two Chief World Systems, on the virtues of a Copernican view of the solar system over a more traditional Ptolemaic perspective was condemned as heresy. Alpini's dialogue on balsam merely added to his reputation as one of the finest physicians and noteworthy botanical specialists in Venice and Italy.

Alpini elected on his return from Cairo not to return to Venice. Rather than deal with the politics of the Venetian court, Alpini took advantage of an invitation to be the personal physician to Andrea Doria, Prince of Melfi, in Genoa. Alpini remained in Genoa until 1593, when the Venetians were able to arrange an appointment at the University of Padua as a medical professor and caretaker of the university's important and famous gardens.

Interestingly, Galileo arrived at the university in 1592, teaching until 1610. I regret that there is no record of the dialogues of Alpini and Galileo, although I must admit to daydreaming about fictional scientific discussions between these two scientists (perhaps the differences in their annual salaries; Galileo was paid a thousand florins a year, or five times the salary of Alpini). The scientific and research environment at the university must have been inspiring. Proof certainly can be found in one of the alumni of Padua from this period, the most famous British physician and experimentalist of the seventeenth century, William Harvey (1578–1657). Harvey earned his medical degree at Padua in 1602. Harvey eventually became physician to King James I (1566–1625) and published his most famous work, Exercitatio anatomica de motu cordis et sanguinis in animalibus, in 1628 on the circulation of blood. 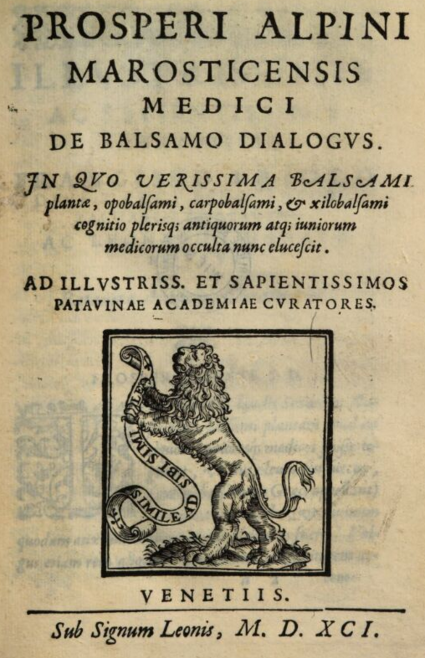 Coffee first arrived in Europe in Venice thanks to Alpini’s introduction to its use in Egypt. The first coffeehouse in Europe appeared in Venice and the pope, that is Pope Clement VIII (1536–1605, pope 1592–1605), approved of the consumption of coffee in 1600. Coffee consumption quickly spread to France, England, Germany, and the rest of Europe.

The enterprising Dutch decided to tackle the high costs of coffee by growing their own. Coffee was brought from Yemen to the Amsterdam Botanic Garden (De Hortus Botanicus Amsterdam) around 1616 in order to experiment with its growth. The coffee bushes thrived in the Garden and were used as the foundation of plantations in Sri Lanka, India, and eventually Dutch colonies in Java. These plantations were successful, allowing the Dutch to reduce their costs for coffee and provide an alternative source for beans to European coffeehouses. Coffee became the foundation of Verenigde Oost-Indische Compagnie or the Dutch East India Company. In turn, the Dutch gave Louis XIV (1638–1715) coffee plants as a gift. Those plants eventually found their way to French colonies in South America and Brazil. Today, a third of all of the world’s coffee comes from Brazil, from some three billion coffee shrubs. It all started with a Dutch gift to a French king.

Alpini wrote yet another book dedicated one kind of plant, De rhapontico, published in 1612. This work on the medicinal effects of rhubarb certainly did not lead to the spread of rhubarb houses around Europe and the world. Too bad for me and my garden's flourishing rhubarb!

Alpini's expedition to Egypt as a curious diplomatic physician changed the habits of millions, creating an economy worth billions. The results of his research first appeared at the end of the sixteenth century, in seemingly innocent works on the flora of Egypt and the medical values of a few alien plants. I raise my coffee cup in salute to dear Prosper Alpini!