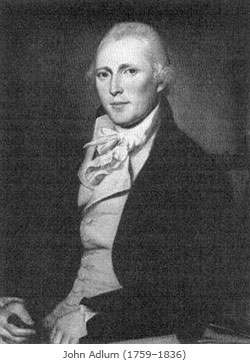 The United States is one of the world's leading wine producers, creating more than 836 million gallons a year. Where were some of America's earliest wineries located? Were they in California, which produces over 87 percent of all wine in the United States? Who created the first wines, praised by no less an expert than Thomas Jefferson?

John Adlum (1759–1836) was a veteran of the Revolutionary War, surveyor, and judge, before he began to experiment with various grape varieties early in the 1800s. As a surveyor in Pennsylvania in the 1780s and 1790s, Adlum befriended Seneca chief Kaiiontwa'ton—a.k.a. Gaiänt'wakê or Cornplanter—(1752–1836). Chief Cornplanter was well known for his diplomatic relations with Americans. There is some evidence that Adlum began to collect information on wild grapes as a surveyor, although there is no direct proof that Adlum learned about grapes in the wild from the Seneca. However, the Seneca wildcrafted—that is, collected in the wild—berries, herbs, grapes, and other plants, so Adlum certainly could have learned a great deal from Seneca gatherers.

Adlum used his notes and experiences, however secured, on wild Vitis spp. when he settled on his Maryland farm near Chesapeake Bay in 1797. His initial efforts with European grape stock failed, much like other tests in the New World with Vitis vinifera from Europe. Adlum began to experiment with different wild varieties of American grapes with an aim to create wines to rival those from Europe. His investigations regrettably are not well documented, but he probably worked with wild varieties from Pennsylvania, Maryland, and elsewhere. He eventually succeeded in creating the first noteworthy American wine, as revealed in an effusive letter from Thomas Jefferson (1743–1826), dated October 7, 1809:

"While I lived in Washington, a member of Congress from your state (I do not recollect which) presented me with two bottles of wine made by you, one of which, of Madeira colour, he said was entirely factitious, the other, a dark red wine was made from a wild or native grape, called in Maryland the Fox grape, but very different from what is called by that name in Virginia. this was a very fine wine, & so exactly resembling the red Burgundy of Chambertin (one of the best crops) that on fair comparison with that, of which I had very good on the same table imported by myself from the place where made, the company could not distinguish the one from the other. I think it would be well to push the culture of that grape, without losing our time & efforts in search of foreign vines, which it will take centuries to adapt to our soil & climate." 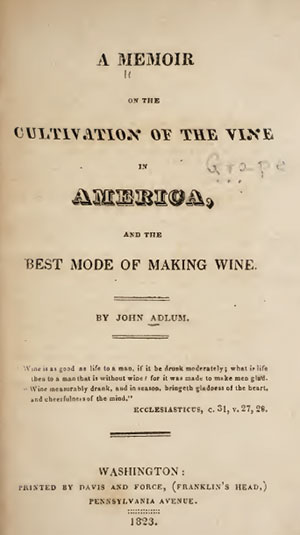 Title page of A memoir on the cultivation of the vine in America, and the best mode of making wine from the copy in the Perkins Library of Duke University (photo from the Biodiversity Heritage Library)

The Burgundy of Chambertin that Jefferson favorably compares to Adlum's wine was popular with Napoleon, a Grand Cru that fetches high prices per bottle among oenophiles. One has to remember that American tastes for wine at the start of the nineteenth century were strange by our standards. We might, diplomatically, call them unsophisticated, as revealed in a letter from Jefferson to Adlum, dated April 20, 1810:

"... the general error in this country that brandy always, & sugar sometimes are necessary for wine. This idea will retard & discourage our progress in making good wine. Be assured that there is never one atom of any thing whatever put into any of the good wines made in France."

Adlum probably used the Alexander or Tasker's grape to create his wines that were so popular with Jefferson and others. This grape was discovered in a Philadelphia neighborhood by Thomas Penn's (1702–75, son of William Penn, 1644–1718) gardener. It was widely circulated by William Bartram (1739–1823), son of John Bartram (1699–1777), one of the most famous naturalists in early America. Adlum's success with Alexander-based wines did not stop him from further experimentation. 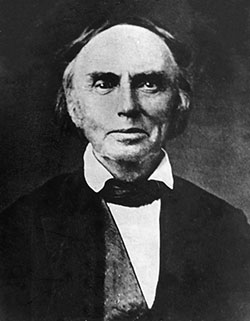 By 1814, Adlum had acquired some 220 acres in Georgetown in the District of Columbia to establish one of earliest commercial vineyards in the country. He emphasized another American variety called Catawba, which he acquired in Maryland (but probably originated in western North Carolina). According to Thomas Pinney, in A History of Wine in America (University of California Press, 1989), Adlum's first releases in the 1820s based on the Catawba met with, to be polite, mixed reviews.

More importantly, Adlum in 1823 published the first book on winemaking in America, A memoir on the cultivation of the vine in America, and the best mode of making wine. He also began to make available cuttings of Catawba, which met with enormous demand as a sort of horticultural bonus to his book. Adlum's Memoir is not groundbreaking by any stretch of the imagination, but it did emphasis the importance of using American, not European, grapes. It encouraged experimentation, even if we can ignore its flaws compared to modern winemaking techniques.

Adlum's Catawba found its way to Cincinnati and Nicholas Longworth (1783–1863). Longworth established the first great commercially successful vineyard with the Catawba, generating millions of dollars with sparkling wine. This "champagne" was favorably reviewed even in Europe, and was well received throughout the United States. It was the first American wine to earn a poem in 1858, "Ode to Catawba Wine", by the great Henry Wadsworth Longfellow (1807–82):

"This song of mine
Is a song of the Vine
To be sung by the glowing embers
Of wayside inns,
When the rain begins
To darken the drear Novembers.

There grows no vine
By the haunted Rhine,
By Danube or Quadalquivir,
Nor on island or cape,
That bears such a grape
As grows by the Beautiful River.

Drugged is their juice
For foreign use,
When shipped o'er
the reeling Atlantic,
To rack our brains
With the fever pains,
That have driven the
Old World Frantic.

To the sewers and sinks
With all such drinks,
And after them tumble the mixer,
For a poison malign
Is such Borgia wine,
Or at best but a Devil's elixir.

While pure as a spring
Is the wine I sing,
And to praise it,
one needs but name it;
For Catawba wine
Has need of no sign,
No tavern-bush to proclaim it.

And this Song of the Vine,
This greeting of mine,
The winds and the birds shall deliver
To the Queen of the West,
In her garlands dressed,
On the banks of the Beautiful River."

The efforts of Adlum, Jefferson, and Longworth were precursors to the development of the wine industry in California, which grew enormously in 1850s. The growth of vineyards in California in part was due to immigrants rushing to the West because of the Gold Rush (1848–55). We'll examine that story, and its printed history, next month.