The Martian: Many of us watched and loved the movie. Some of us read the book. A few of us got inspired to use the story to teach plant science to students.

The Martian by Andy Weir tells the fictional story of NASA astronaut and botanist Mark Watney, who becomes stranded alone on Mars and has to figure out how stay alive until the next NASA mission returns to rescue him. He plants six potatoes and successfully propagates a crop of potatoes in Martian dirt fertilized with human poop.

The story got me wondering if we could replicate Martian soil with local ingredients and use it for plant experiments. So I contacted the Garden’s soil scientist, Louise Egerton-Warburton, and asked her if this was possible. She responded with a recipe:

You know you work in a great place when you can ask a colleague for directions for making Martian soil and you get an immediate, enthusiastic response with suggestions for how to use it. I acquired the materials and cooked up a batch. 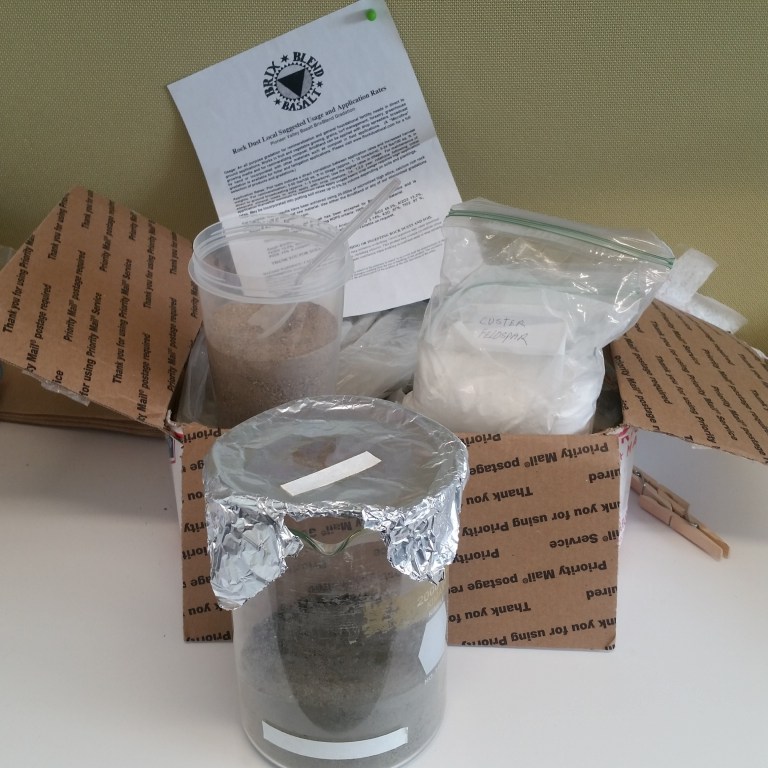 I keep the ingredients for Martian soil in my office, in case Mark Watney drops by. Because you just never know. Matt Damon and Andy Weir are also welcome, but I hear they have both moved on to other projects.

One important thing I must mention: technically speaking, this mixture is not truly soil. Soil is the upper layer of material on the Earth that serves as an ideal medium for growing plants. It contains inorganic minerals from weathered and broken rocks combined with organic material from the decomposed remains of dead plants and animals. Real soil hosts microscopic bacteria and fungus that facilitate a cycling of nutrients through the ecosystem and convert minerals to a form plants can absorb and use. Soil also supports many little macroscopic critters, like worms and mites, that increase the porosity and affect other properties of the mixture.

The substance we would find on the surface of Mars is called regolith, which is mineral particles that result from weathering of rocks. Since my mixture is an approximation of what might be found on Mars, but made from Earth-sourced ingredients, it should actually be called simulated Martian regolith. But that’s a mouthful, so from here on I’m going to call it Martian soil and ask you, dear readers, to accept the inaccuracy for the sake of simplicity. OK?

I took my Martian soil and set out to answer my first question: what happens if we try to plant seeds in this stuff? Put another way, is it possible to grow plants in Martian soil without adding anything? To answer this question, I took a polystyrene egg carton and planted marjoram seeds (because I had some laying around) in my Martian soil and in some Earth potting soil for comparison. 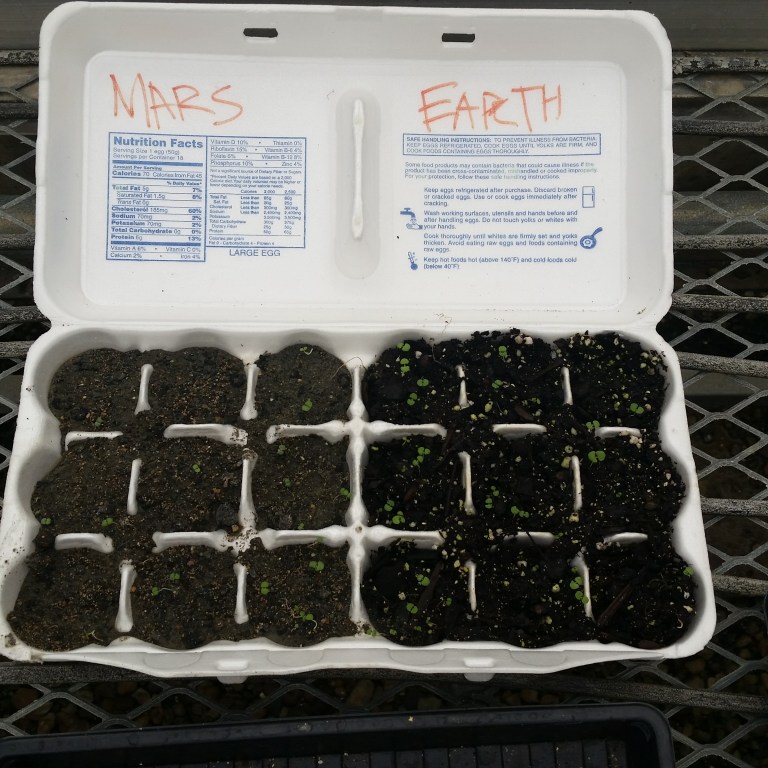 It was overcast outside when I took this picture in the greenhouse—you’ll have to look closely to see that the marjoram seeds sprouted in both Martian and Earth soils. So far, so good.

The Martian soil is completely different from the potting soil in appearance and texture, and it responds differently when watered. Shortly after the seeds germinated in all of the cells, the Mars side went south. It didn’t hold water very well; it dried out and became hard, almost like concrete. It was no surprise that all of the seedlings on the Mars side died soon after germination. Plants on the Earth side continued to grow and thrive. 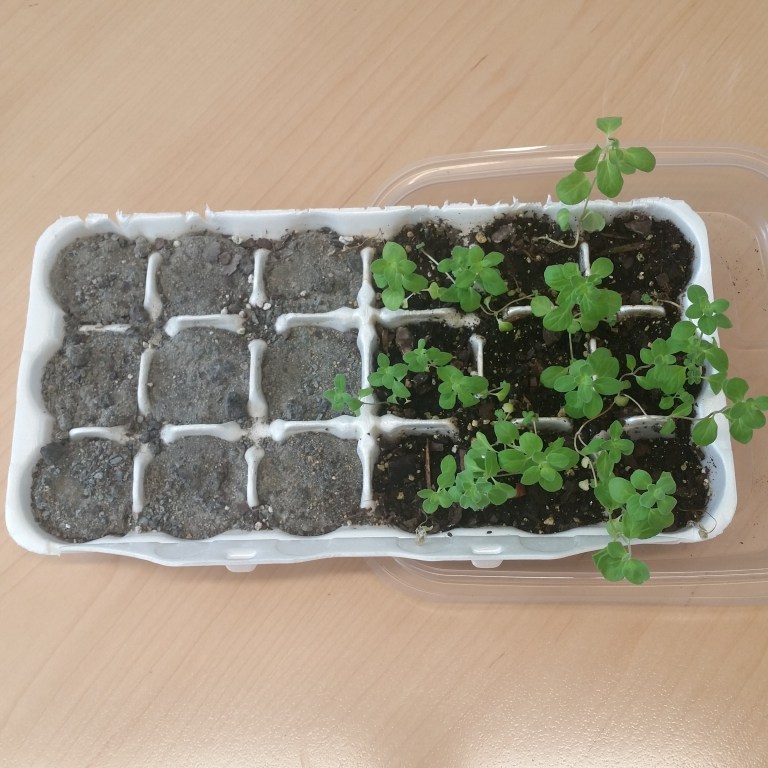 It is clear from this test that the Martian soil needs to be amended to grow plants. We were told this in The Martian, but now I know it from personal experience. We can use our observations to understand why Martian soil is not a good medium for plants. That’s real science learning!

In the book, Watney used a bucket of Earth soil and human waste to amend the Martian soil for his potato crop. The book and the movie differ on this part—likely because the process required to make Martian soil suitable for growing potatoes was long and tedious. It wouldn’t make for riveting cinema. Instead of cultivating the soil over time, movie-Watney planted a spoonful of rehydrated human poop next to each piece of potato.

While movie-Watney’s actions remind us of stories about the Pilgrims teaching the indigenous people to place a piece of fish next to each kernel of corn to improve the crop yield, there are some problems with applying this method to our Martian soil. The Martian soil would still lack sufficient organic materials and therefore not be able to hold water (as I demonstrated with my marjoram seed experiment). There would be an insufficient population of microbes to break down the human waste. Furthermore, the fecal matter might be so concentrated in nutrients that it could actually be toxic to the potato plants. I don’t believe it would actually work.

This compelled me to do some myth busting for my next experiment: since “humanure” would be unsafe—and gross!—I used worm poop, or vemicompost, which I have in plentiful supply from worm bins in our Learning Center nature laboratory. Also, I discovered that you can order “Martian Regolith Simulant” from a company online (who knew?). Although it’s expensive, it saved me the effort of crushing rocks, so I’m using it from now on.

This time, I planted russet potato pieces and some sweet potatoes that had sprouted in my pantry at home (oops!) in azalea pots. I set up three conditions: Martian soil, Martian soil plus vermicompost, and Earth potting soil for comparison.

Underlying these experiments (and few other I have tried) is a basic investigation of what plants need to survive. By testing to find the right combination of Martian soil and amendments, and limiting solutions to those that could be transported by a spaceship to another planet, we are using engineering practices because we are trying to solve a problem. This is real-world science and engineering that students could do in the classroom. 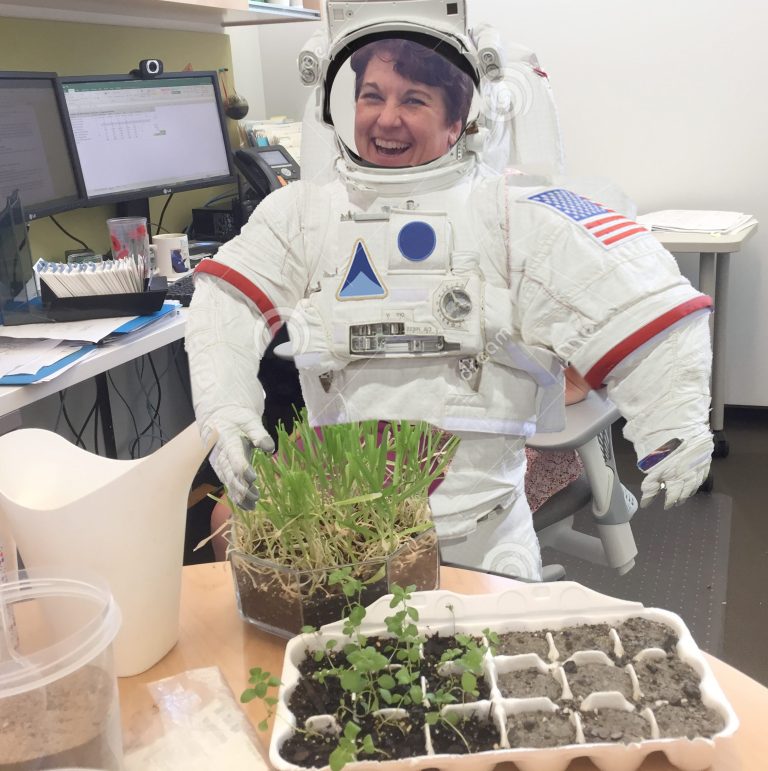 Here I am, working on my next astro-botany experiment, for myself, for teachers, and for science!

Besides satisfying my personal curiosity, these experiments are paving the way for some science lessons we are writing for teachers and students.

We may never need to grow crops in Martian soil. But as we investigate the challenges of colonizing another planet, we can learn more about what plants need to thrive and also develop a genuine appreciation for how amazing our Earth soil is.

"...While movie-Watney’s actions remind us of stories about the Pilgrims teaching the indigenous people to place a piece of fish next to each kernel of corn to improve the crop yield..."

I recall reading this being the other way around, Squanto teaching the Pilgrims. Read this decades ago, so did a quick search. From one result ..

"...We particularly like this excerpt that explains Squanto’s role in teaching colonists how to plant corn ..."

This is a good point, and we

This is a good point, and we should give credit to the right people for advancing agriculture techniques. Though, I have a hunch that neither group actually taught the other this trick, that both groups were skilled in growing crops, and it made for a good story of cross-cultural exchange of information for the benefit of all.

Have you tried growing anything in Martian regolith simulant? I've reached the conclusion that we would be more successful growing crops hydroponically than trying to amend Martian dirt. Too bad there aren't native Martians to teach us how! 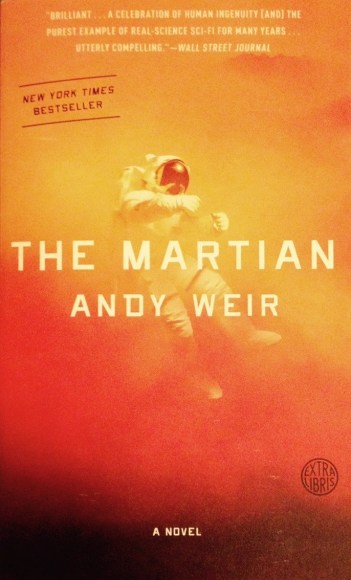 If you are a science enthusiast, I highly recommend reading the book.