Dreaming of Bald Eagle Pairs at the Garden

When I was growing up, there were certain animals I was saddened to think I would never see in my lifetime. There were those species that had become extinct, of course, like passenger pigeons, Carolina parakeets, ivory-billed woodpeckers, and Labrador ducks. I had read the life histories of these species and marveled at descriptions of their colors, sounds, and abundance. It made me feel depressed that these amazing creatures were gone forever.

Then there were those species that had reached such critically low numbers that, for all practical purposes, they were functionally extinct for me. Birds like the prairie chickens, barely holding on in postage stamp-sized grasslands that we had not yet converted to something “useful.” Peregrine falcons had vanished from the eastern half of the United States, due to the widespread and indiscriminate use of DDT, an organochlorine pesticide developed during World War II for killing insects. This same chemical had reduced the populations of Cooper’s hawks and bald eagles to such low levels that I just didn’t see them, no matter how hard I tried.

As a kid I thought these kinds of losses were in the past. Unfortunately, the loss of species has not stopped, or lessened, but is increasing at an ever-greater pace, and we are now in what is referred to as the Sixth Mass Extinction. I, like many others in the conservation field, and my colleagues at the Chicago Botanic Garden, have dedicated our lives to the preservation and maintenance of as much biodiversity as possible.

So it is always uplifting to experience a “conservation victory.” The bald eagle is one example of such a success story. By the 1960s and ’70s, the bald eagle was reduced to a handful of breeding pairs in the entire eastern United States and listed on the federal Endangered Species list. Even in those few territories that still contained adult eagles, almost no young were being produced. Around this time, a group of dedicated conservationists held a conference to evaluate what was happening and what needed to be done to reverse this trend. With much work and determination, it was discovered that the pesticide DDT was to blame for the collapse of so many populations. Efforts to educate the rest of the scientific community and the public led to the passage of laws banning the further use of these environmentally destructive compounds in the United States.

Today, there is a record high of 1,695 breeding pairs of bald eagles in Wisconsin, with at least one pair in all of Wisconsin’s 72 counties. In Illinois, there are at least 30 to 40 breeding pairs. The bald eagle was removed from the federal Endangered Species list in 2007 and from the Illinois list in 2009. Although no eagles nest at the Chicago Botanic Garden, they do nest close enough that it is now relatively common to see them here almost any week during spring and summer, with occasional sightings the rest of the year.

Bald eagles start their courtship early in winter and can begin nest building and egg laying as early as February. Eagle nests are usually built in living trees and can get quite large, as the long-lived adults add additional material to the same nest each year. One of the largest bald eagle nests ever recorded was in Florida. It was 9.5 feet in diameter, 20 feet deep, and weighed more than 2 tons. Eagles generally lay two to three eggs in their large nests, with two young being most common.

Bald eagles are opportunistic predators and will feed on whatever is most abundant and easiest to catch. Here at the Garden, they can be observed taking fish off the surface of our lake system, pursuing waterfowl sitting on the water, or attempting to catch muskrats as they swim across the lake. Eagles perched on logs or mud flats along the shoreline have been seen plucking passing turtles from the water. They also commonly feed on carrion such as road-killed deer, especially in winter.

The adult eagles, those birds 4 to 5 years of age, are easy to spot with their 7-foot wingspan, dark brown bodies, and snow-white head and tail. The immature eagles, equally large, are more or less dark all over, with various amounts of white mottling throughout their plumage.

If you are interested in seeing bald eagles at the Garden, look for them flying over any time of the year, or perched in trees, close to the water on logs and on mud flats south of the Dixon Prairie in spring and summer. The Barbara Brown Nature Reserve, on the south end of the Garden, is also a good spot to find visiting eagles when they are hunting for themselves or their nestlings.

Perhaps one day, as bald eagle populations continue to increase and expand, the Garden will be lucky enough to have a pair of these majestic birds nesting on site in one of the large cottonwoods ringing our lake system. Until then, keep your eyes to the sky and you may be rewarded with a glimpse of our national symbol. 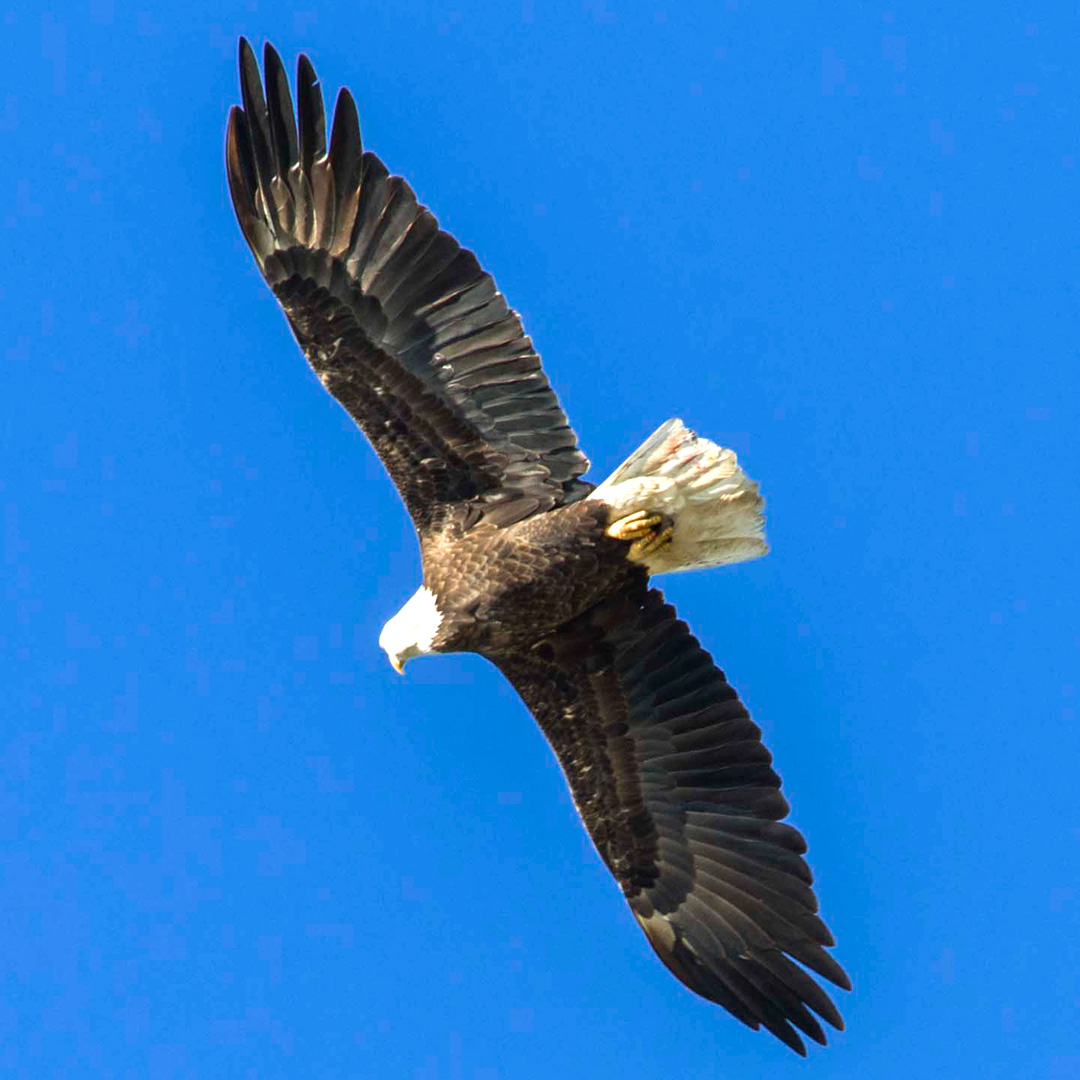 Next time you visit, don't forget your zoom lens and binoculars to catch a glimpse of the Garden’s cast of feathered characters that changes with the seasons. 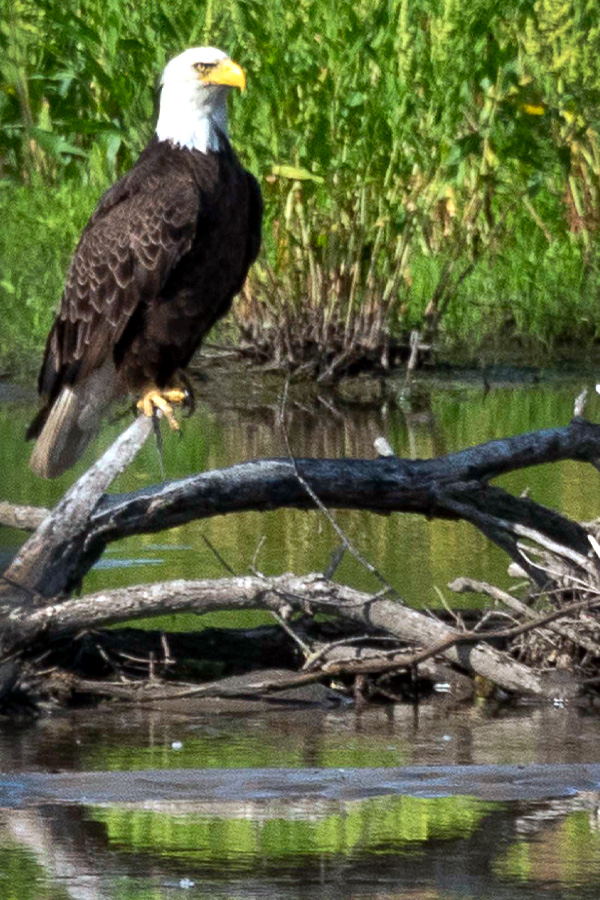 Come for the flowers, stay for the birds. Read more about birding at the Garden. See what species have been spotted on Garden grounds, including bald eagles.

Want to learn more about birds? Check out the nature & birding classes available at the Garden.

Jim, your article about

Jim, your article about Eagles at the Botanical Garden was fascinating. You captured the spirit and dedication of many that admire and protect the Eagle population. I had no idea there was such a large population in Wisconsin but had heard Eagle River area(appropriately named) is abundant. I also have always found it a fun fact that eagle pairs mate for life and that most eagles have 2 nests ( a winter and a summer location) which they return to every year. Thank you for sharing this information.

Jim, they are here! There

Jim, they are here! There has been a pair nesting in the Skokie Lagoons for the past 2 years and I occasionally see an eagle fly over the Botanic Gardens.

Seen one grab a fish out of