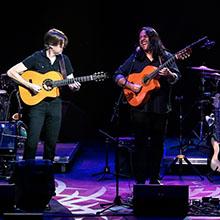 Please note: You are encouraged to bring your own chairs, as the Garden has a limited supply available each evening.

Picturing the Prairie
May 1 to Sep 12