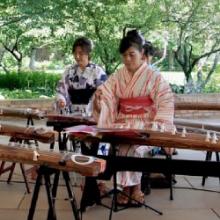 The Chicago Koto Group was founded in 1985 by Akiko Sugano in order to serve the greater Chicago community by introducing it to Japanese culture and music. They hold several public performances each year and also serve to educate students at elementary schools and colleges about Japanese culture through music. The koto is a traditional Japanese instrument used today mostly in chamber music. It was introduced into Japan from China around the sixth century as part of the Imperial Court ensemble but quickly moved into popular culture. Additional instruments include the shamisen (a three-stringed banjo-like instrument) and shakuhachi (a bamboo flute).