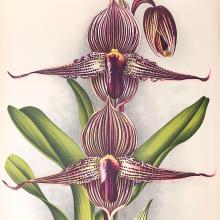 Learn more about beautiful and colorful Asian orchid illustrations from the rare book collection in this free library talk.

For more than 2,000 years, orchids have been intertwined with Asian culture, representing love, beauty and grace. They are used medicinally, for their fragrance, and collected to the point of extinction. Illustrations of the rare and endangered orchid, Paphiopedilum rothschidianum (Rchb. f.) Stein, are featured along with illustrations of other Asian orchids from the rare book collection. Presented in collaboration with the Orchid Show, several volumes from the Annals of the Royal Botanic Garden, Calcutta series, published in the late 19th century, will be on display.