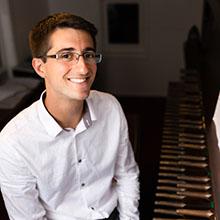 Joey Brink is the sixth university carillonneur at the University of Chicago, where he performs on the 72-bell Rockefeller Memorial Carillon and directs a carillon studio of 20 students. He serves on the board of the Guild of Carillonneurs in North America (GCNA) and co-chairs its Johan Franco composition committee to promote new works for carillon. Brink began his carillon studies at Yale University with Ellen Dickinson in 2007; graduated with greatest distinction from the Royal Carillon School in Mechelen, Belgium in 2012; and studied further with Geert D’hollander at Bok Tower Gardens in 2015. He received first prize at the International Queen Fabiola Carillon Competition in Mechelen in 2014, and has toured North America and Europe extensively as a performer. Brink is regularly a recitalist at congresses of the GCNA and the World Carillon Federation, most recently as a soloist with the Barcelona Municipal Symphonic Band in June 2017.