A Royal Blue Prairie Plant with a Very Indelicate Nickname

Perhaps you noticed the spiderwort, with its striking royal blue flowers, in the Dixon Prairie as part of the perimeter walk of the Garden, which takes place through June 23. Or did you say cow slobbers? Whatever you call it, Tradescantia ohiensis is just one of the prairie plants that has a unique story to tell. 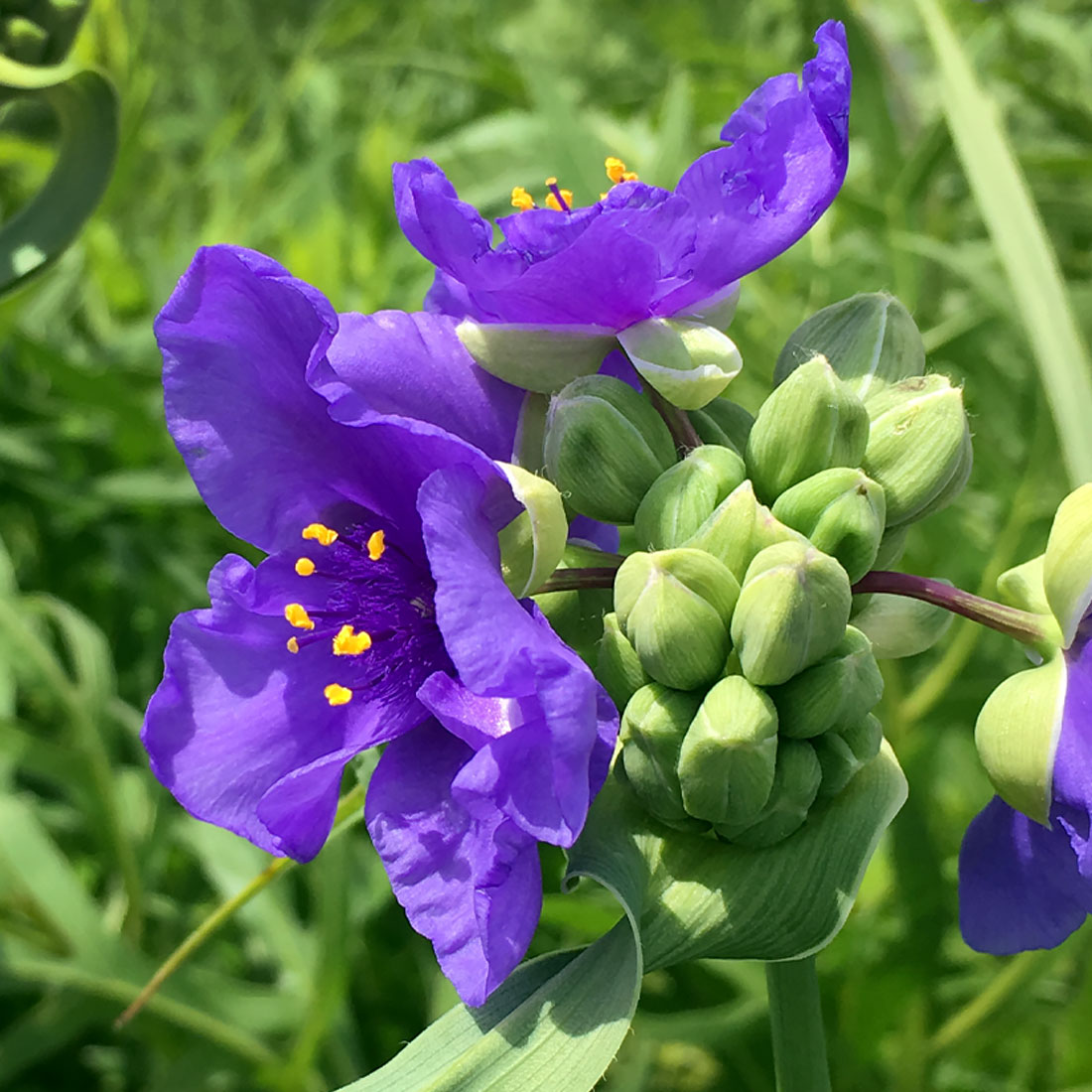 Tradescantia ohiensis, better known to most as spiderwort, blooms in late spring in moist prairies. Its brilliant, royal blue flowers composed of three petals contrast with its six bright yellow anthers, each flower opening for a few hours in the morning or longer if cloudy. Spiderwort belongs to the Commelinaceae, the day flower family, which commonly features plants with flowers that open for a day or less and then deliquesce (liquefy). If you pinch one of the blue petals between your fingers, you will reduce it to a wet purple stain. Fortunately, the plant produces numerous flower buds so that its short-lived flowers are replaced by new flowers, prolonging the blooming period.

Another interesting feature is its other common name, cow slobbers. If you break a leaf, you will understand how this common name came to be. The genus Tradescantia and others in this family have a mucilaginous sap that, for all you farmers out there, resembles bovine saliva as it drips from the broken leaf. I had a volunteer that worked with me on the Dixon Prairie that called the plant snotweed—appropriate but no need to go into the details here. 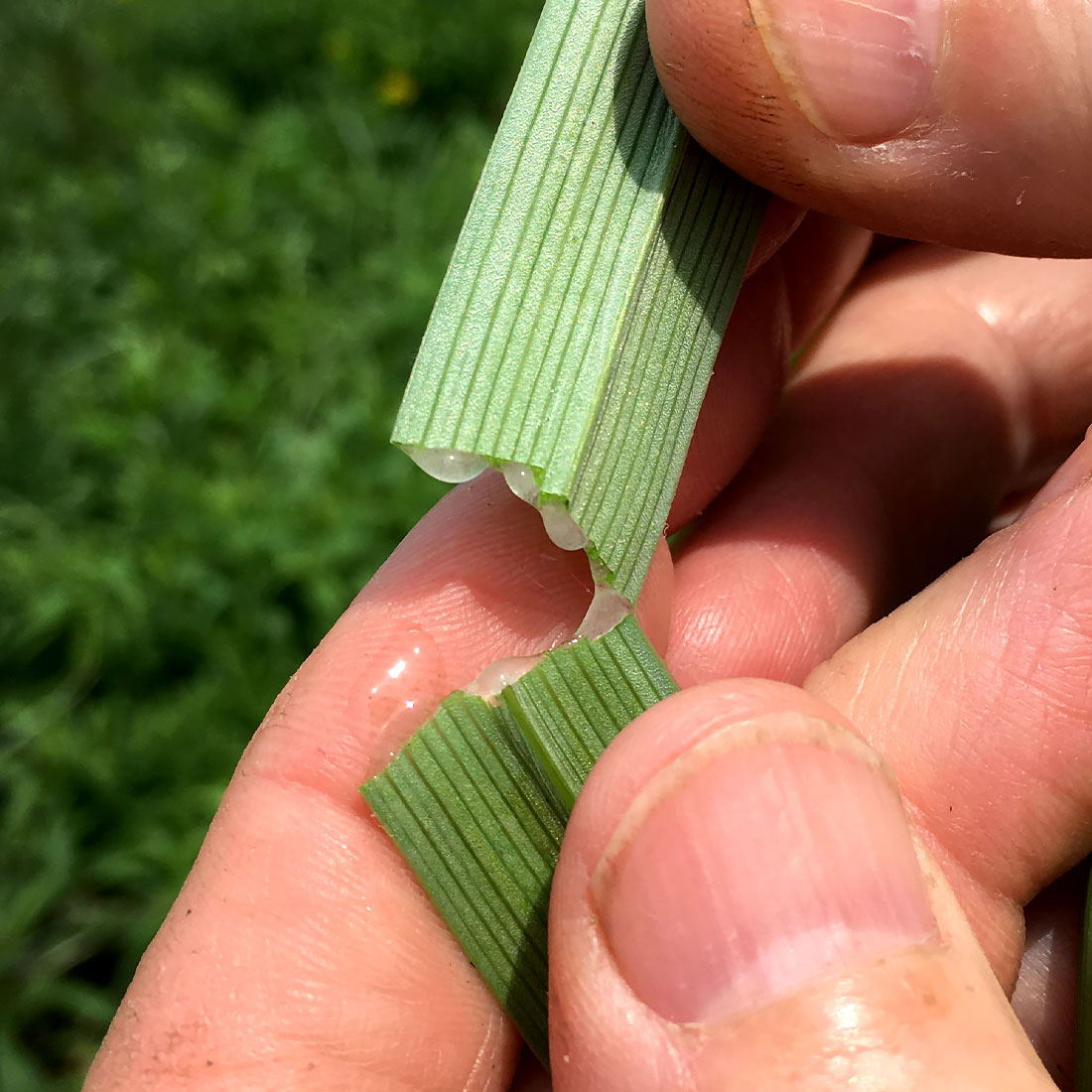 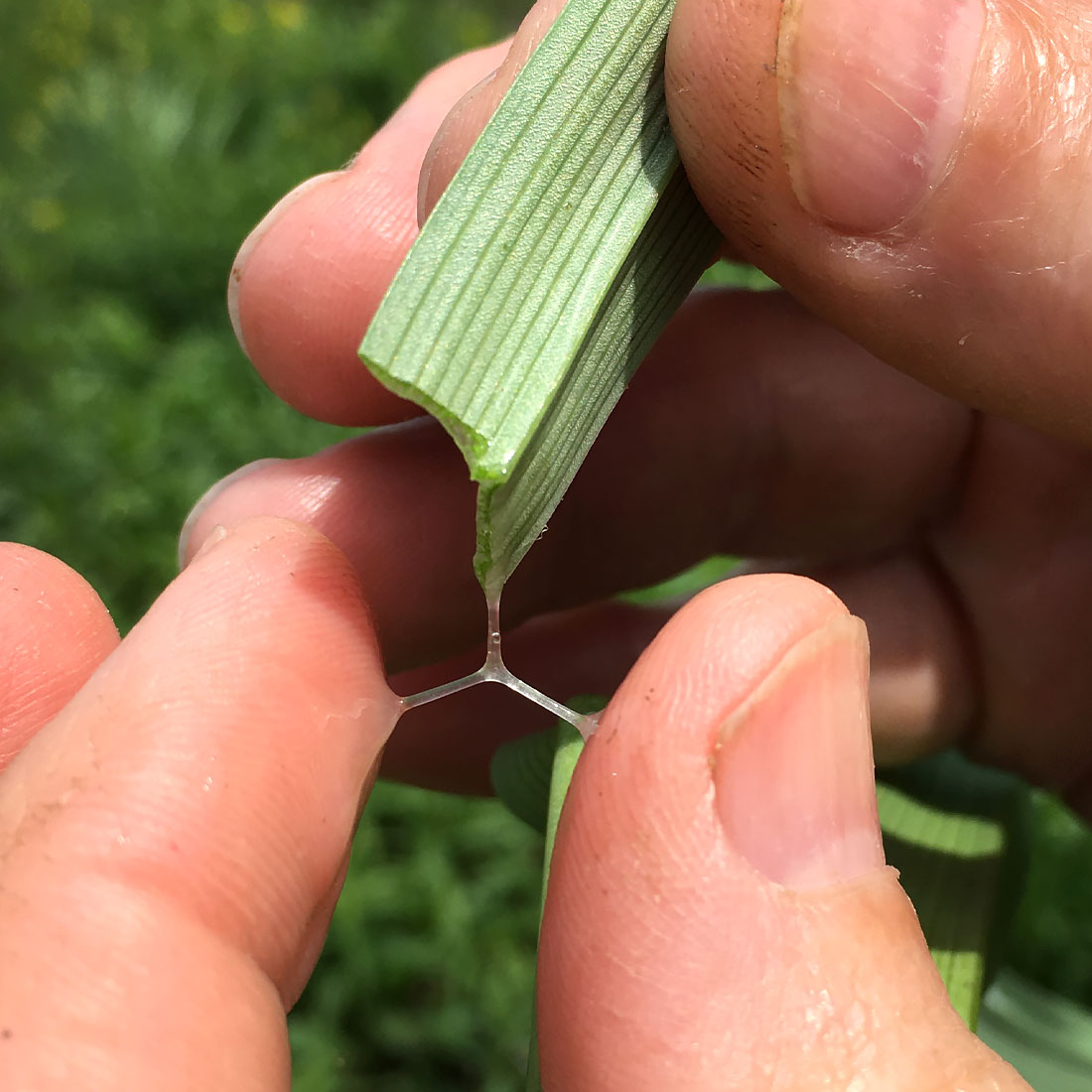 The common name, spiderwort, may refer to spiderweb-like strings of mucilaginous sap that form as it stretches between your fingertips.  By the way, the “wort” part of spiderwort, which is commonly used to describe many plants (figwort, moneywort, mugwort, liverwort), simply means “plant” in old English. 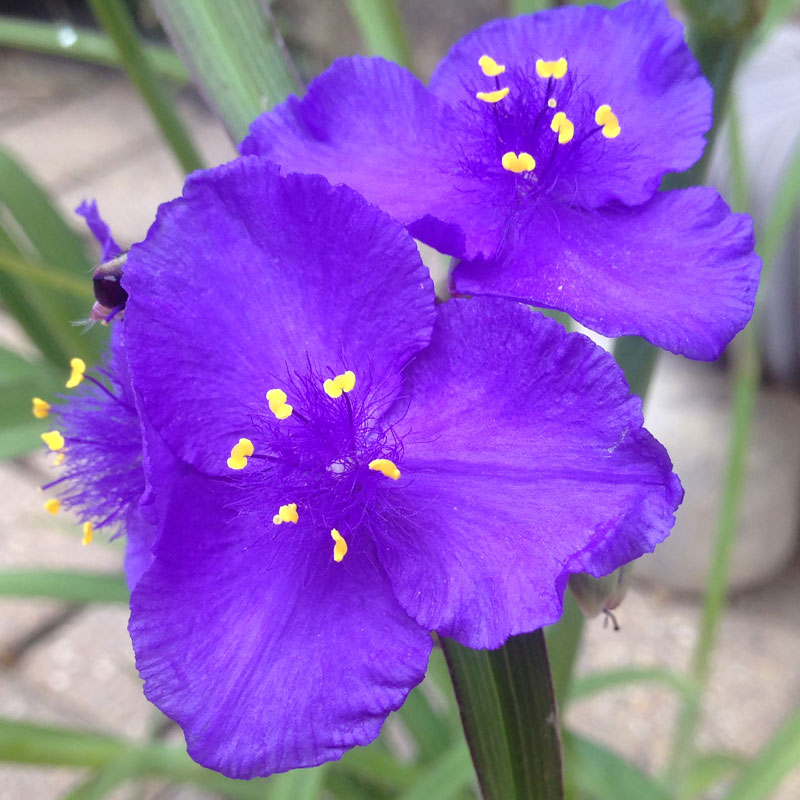 Spiderwort is a monocot, along with grasses, sedges, lilies and irises, in that it features linear leaves with parallel veins. Also, monocots feature flower parts in threes or multiples of threes.  The sap-filled stems and leaves are pale green, slightly glaucous (light grayish color often resulting from a waxy surface), and nearly hairless. In fact, the hairiest part of the plant are the long blue hairs on the filaments (stalks) of the stamens (male flowers).

Spiderwort has a royal connection other than its beautiful blue flower color. Carl Linnaeus, who developed the two-name genus/species system, named Tradescantia after a father and son who were gardeners for King Charles I. In 1630, John Tradescant became the gardener for King Charles I.  Both Tradescant and his son John were avid plant collectors, and the son made several collecting trips to North America. On one of those trips, he collected Virginia spiderwort (Tradescantia virginiana), a related species that inhabits mostly open woodlands in the east but does occur as far west as Illinois. Tradescantia plants were traded throughout Europe in the 1600s as a result of his expeditions to this country. 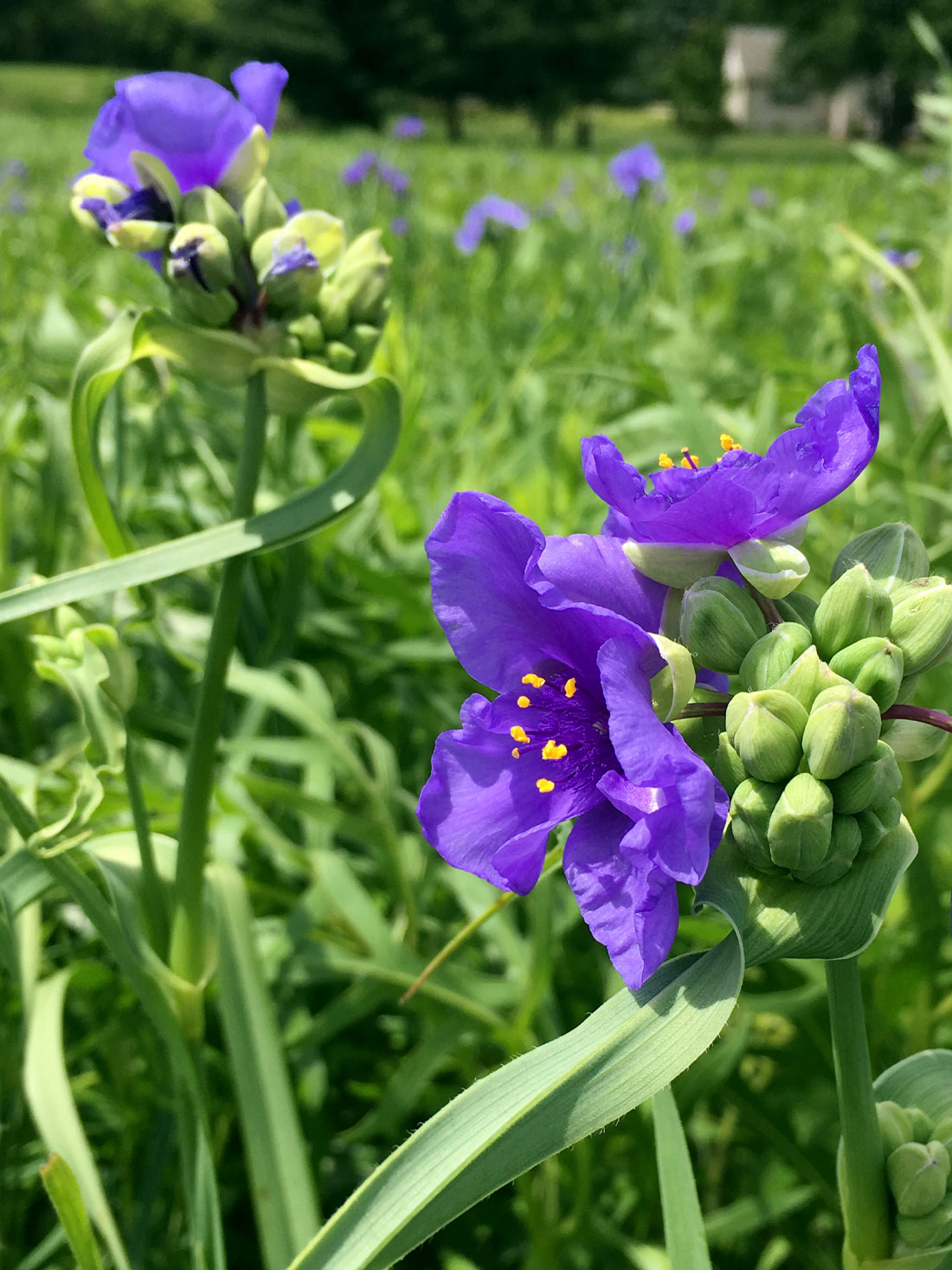 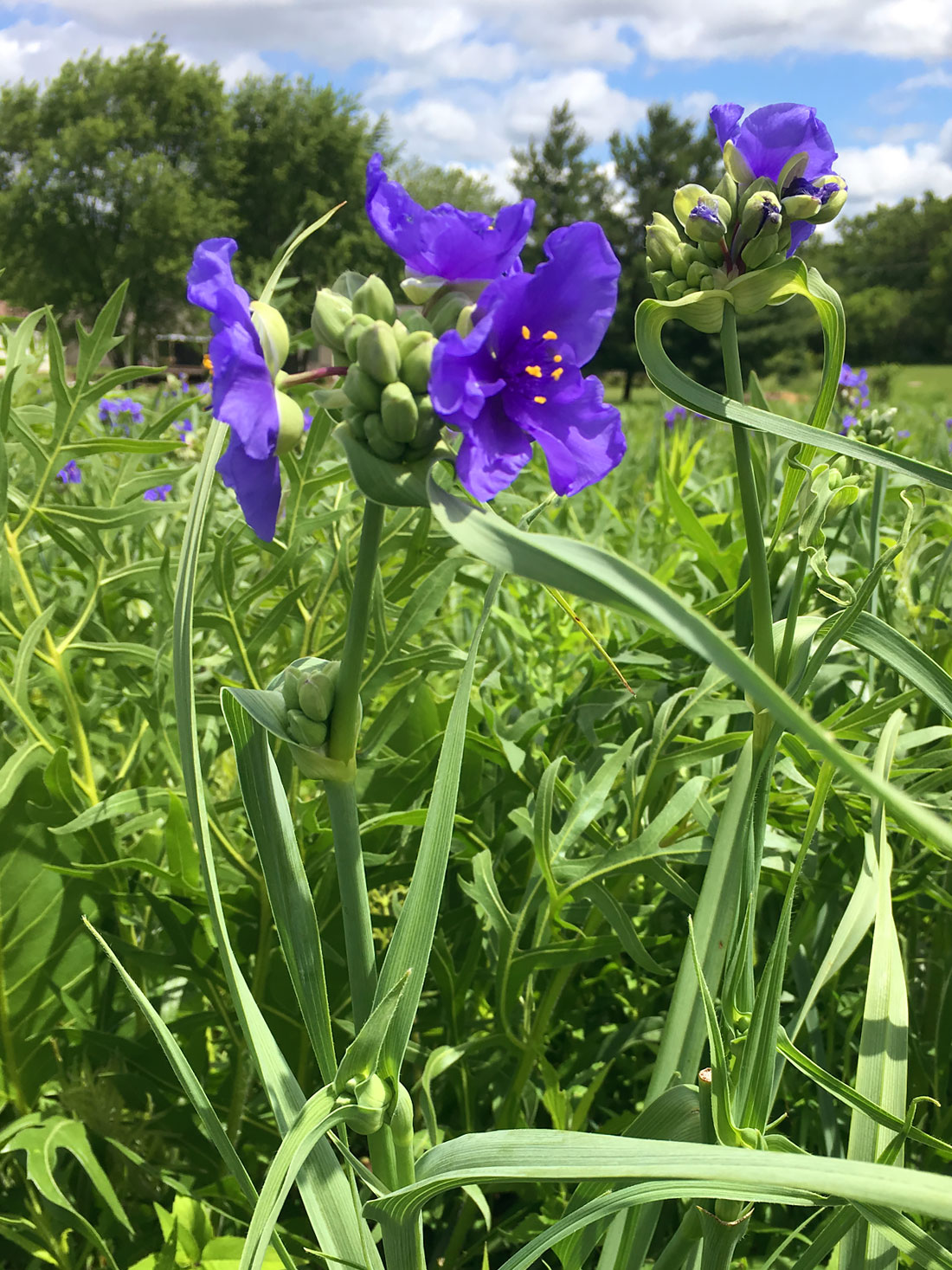 So, if you come across a plant with deep blue flowers and pale strap-like leaves on a sunny morning in your local prairie, you are probably looking at spiderwort.

I’ve had spiderwort in my

I’ve had spiderwort in my yard for years but never knew its backstory. Thanks!